Taino Indians of the Arawak people. Lost History: Rediscovering the Taíno People (Short Documentary) 1493: Conquest and Colonization of the Taínos of Puerto Rico. Taino The Original People of Boriken (P.R.) U.S.A. Taíno. Taíno language. Taíno, an Arawakan language, was the principal language of the Caribbean islands at the time of the Spanish Conquest, including the Bahamas, Cuba, Hispaniola, Jamaica, Puerto Rico, the Florida Keys, and the Lesser Antilles. 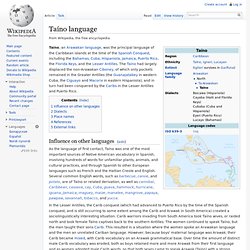 The Taíno had largely displaced the non-Arawakan Ciboney, of which only pockets remained in the Greater Antilles (the Guanajatabey in western Cuba, the Ciguayo and Macorix in eastern Hispaniola), and in turn had been conquered by the Caribs in the Lesser Antilles and Puerto Rico. Influence on other languages[edit] As the language of first contact, Taíno was one of the most important sources of Native American vocabulary in Spanish, involving hundreds of words for unfamiliar plants, animals, and cultural practices, and through Spanish to other European languages such as French and the Haitian Creole and English.

Dialects[edit] Carrada (2003) lists five dialects, though three of them occur in Hispaniola: Baicagua (Baykawa) on Hispaniola. Place names[edit] References[edit] Origin of the Taino. The Origin of the Tainos Civilization has existed in the Caribbean for thousands of years despite the Euro centric assumption that the "New World" was discovered in 1492. 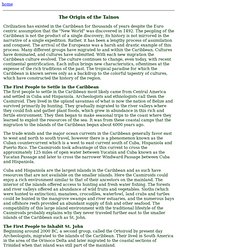 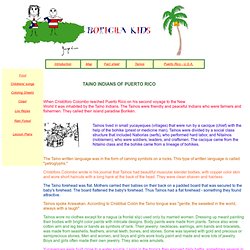 The Taínos were friendly and peaceful Indians who were farmers and fishermen. They called their island paradise Borikén. The Taíno written language was in the form of carving symbols on a rocks. This type of written language is called "petroglyphs. " Cristóforo Colombo wrote in his journal that Taínos had beautiful muscular slender bodies, with copper color skin and wore short haircuts with a long hank at the back of the head. The Taíno forehead was flat. Taínos spoke Arawakan. Taínos wore no clothes except for a nagua (a frontal slip) used only by married women. Yucayeques were built close to a water source. Bohíos did not have much furniture. Areytos were religious ceremonies that sometimes lasted several days. Music was an important part of Taíno life. Not much hunting went on because there was no large game on the island. Taino Indians: Caribbean Native American Indian Tribes. What Became of the Taíno? If you have ever paddled a canoe, napped in a hammock, savored a barbecue, smoked tobacco or tracked a hurricane across Cuba, you have paid tribute to the Taíno, the Indians who invented those words long before they welcomed Christopher Columbus to the New World in 1492. 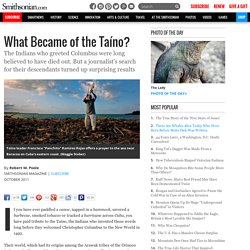 Their world, which had its origins among the Arawak tribes of the Orinoco Delta, gradually spread from Venezuela across the Antilles in waves of voyaging and settlement begun around 400 B.C. Puerto Rican Folkloric Dance & Cultural Center - Music, Dance, and Culture of Puerto Rico. Music by El Concilio Taino! 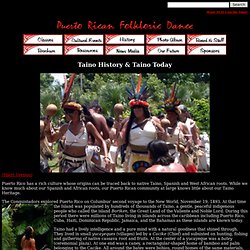 (Short Version) Puerto Rico has a rich culture whose origins can be traced back to native Taino, Spanish and West African roots. While we know much about our Spanish and African roots, our Puerto Rican community at large knows little about our Taino Heritage. Genocide Studies Program. Puerto Rico is one of the world’s oldest colonies, having been under some form of military occupation or protectorate status since 1508. 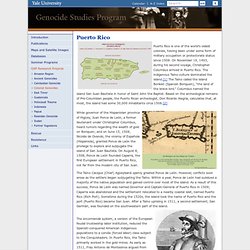 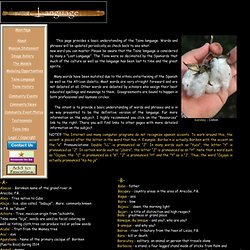 Words and phrases will be updated periodically so check back to see what new word you can master. Please be aware that the Taino language is considered by many a "Lost Language". Taino Culture. The Taino People. Taino Language and the Taino Indian Tribe (Nitaino, Borinquen, Yamaye, Lucaya) Taino History. On December 6th, 1492 Christopher Columbus landed at Mole St. 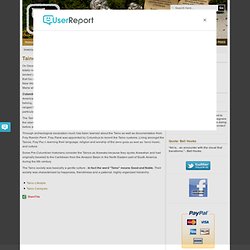 Nicholas in Haiti’s north. Thus began a totally new phase of life on the island of Hispaniola. Most people are aware that Christopher Columbus landed at San Salvador on October 12th, 1492, thus discovering the New World for Spain. Less known is that his second land fall was at Mole St. Nicholas, Haiti on December 1492, or that the first settlement in the New World was La Navidad, on Haiti’s north coast. Columbus did not discover a lost or unknown land. The last of the Taino Empire in Puerto Rico or Boriken. 'Isla Borinken' ...1493 Early History of Boriken or Puerto Rico: 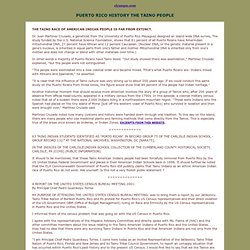 HISTORY OF THE TAINO INDIANS. December 04 Introduction: Taíno Indians, a subgroup of the Arawakan Indians (a group of American Indians in northeastern South America), inhabited the Greater Antilles (comprising Cuba, Jamaica, Hispaniola [Haiti and the Dominican Republic], and Puerto Rico) in the Caribbean Sea at the time when Christopher Columbus' arrived to the New World. 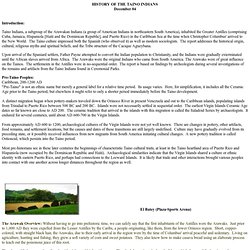 The Taíno culture impressed both the Spanish (who observed it) as well as modern sociologists. TAINO. History of the Taino Indians. The Taino Indians are from the area of the Bahamas and Greater and lesser Antilles. These Indians were probably originated from South Americans. However, the origin of the Taino Indians is not known for sure.

There are different theories out there but they have not been proven. Taino Indian Culture. Taíno Indians, a subgroup of the Arawakan Indians (a group of American Indians in northeastern South America), inhabited the Greater Antilles (comprising Cuba, Jamaica, Hispaniola [Haiti and the Dominican Republic], and Puerto Rico) in the Caribbean Sea at the time when Christopher Columbus' arrived to the New World. The Taíno culture impressed both the Spanish (who observed it) and modern sociologists. The Arawakan achievements included construction of ceremonial ball parks whose boundaries were marked by upright stone dolmens, development of a universal language, and creation of a complicated religious cosmology.

Taínos of Puerto Rico, a cultural site. Taínos by: Ivonne Figueroa July 1996 Edited by Barbara Yañez, Assistant WebSite Editor Imagine the "Eden" called Borikén. It was ruled by nature. A place that was almost completely a rain forest from shore to shore. A place filled with yagrumos, alelís, ceibas, orchids, wild mushrooms - some over 6 feet wide, over 100 species of palm trees, bamboo, elephant ear leaves of the yautía, giant philodendron, giant ferns, mamey and guava trees. Alfred Carrada - The Dictionary Of The Taino Language.