Armed Drone Myth 1: They Will Transform How War Is Waged Globally. As the fight against terrorists has expanded to include the Islamic State, so too has the use of long-range military drones. 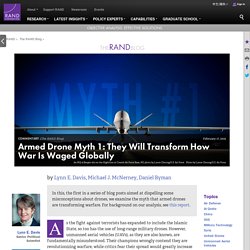 Pentagon agency wants drones to hunt in packs, like wolves. The Defense Advanced Research Projects Agency released this artist’s rendering to help explain what its Collaborative Operations in Denied Environment (CODE) program could do. 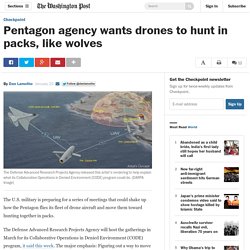 (DARPA image) The US Military Is Building Gangs of Autonomous Flying War Bots. For the Pentagon, drones are cheaper to buy and to operate than regular fighter jets. 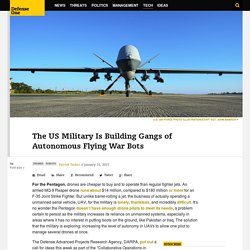 An armed MQ-9 Reaper drone runs about $14 million, compared to $180 million or more for an F-35 Joint Strike Fighter. But unlike barrel-rolling a jet, the business of actually operating a unmanned aerial vehicle, UAV, for the military is lonely, thankless, and incredibly difficult. Geographical imaginations. As I am (at last) moving into the finishing stages of my ‘Dirty Dancing’ essay on CIA-directed drone strikes in Pakistan’s Federally Administered Tribal Areas, it’s time to round up some of the latest work on drones and civilian casualties across multiple theatres. 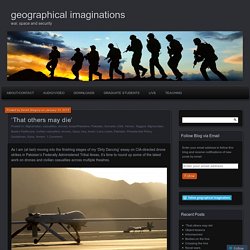 First, Afghanistan: the principal theatre of US remote operations. I’ve noted Larry Lewis‘s remarkable work before (here and here), based on classified sources, and in particular this claim (see also here): Drone strikes in Afghanistan were seen to have close to the same number of civilian casualties per incident as manned aircraft, and were an order of magnitude more likely to result in civilian casualties per engagement.

As I said at the time, the distinction between an ‘incident’ and an ‘engagement’ is crucial, though most commentators who have seized on Larry’s work have ignored it and focused on the dramatic difference in civilian casualties per engagement. The Bureau comments: Drones · A Data Narrative Made by Friends. June 16, 2014. ¶ In February of 2012 Congress told the Federal Aviation Administration (faa) to open the national airspace to drone traffic by September of 2015. 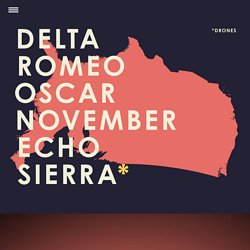 In 2013 the faa released the “Civil UAS Roadmap:” a plan to pave the skyways by clearing the regulations that have thus far kept government and private domestic drones at bay (for the most part) and creating a new regulatory infrastructure to welcome drones home. Privacy means more than not being watched for illegal activity. Privacy—the secret ballot—is the foundation of democracy. Surveillance undermines the secret ballot because when the government knows what you read, who you associate with, and what you talk about, it knows how you vote. Reprieve—UN expert: Lethal use of drones must be curbed. The UN’s foremost expert on extrajudicial killing has called for international restrictions on the use of armed drones. 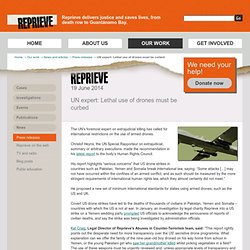 Christof Heyns, the UN Special Rapporteur on extrajudicial, summary or arbitrary executions, made the recommendation in his latest report to the body’s Human Rights Council. His report highlights “serious concerns” that US drone strikes in countries such as Pakistan, Yemen and Somalia break international law, saying: “Some attacks […] may not have occurred within the confines of an armed conflict, and as such should be measured by the more stringent requirements of international human rights law, which they almost certainly did not meet.” UAVs, Stealth, Carriers, Amphibs: DoD Report Details China’s Weapons.

WASHINGTON: The People’s Liberation Army has practiced jamming GPS signals, according to a Pentagon report today. 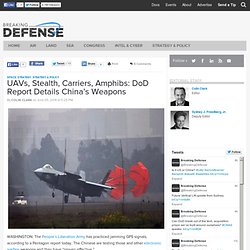 The Chinese are testing those and other electronic warfare weapons and they have “proven effective.” China plans to launch 100 satellites through 2015, including “imaging, remote sensing, navigation, communication, and scientific satellites, as well as manned spacecraft,” says a special section headlined ”Special Topic: Reconnaissance Satellites” in the annual Pentagon report to Congress about China’s military capabilities and intentions. (Note: that includes manned spacecraft and most of the satellites mentioned are weather, agriculture and related satellites — not advanced spy satellites.) In another “special section,” this one about low observable technology, the Pentagon report lists weapons “demonstrated” last year: “Throughout 2013, the PLA Air Force continued testing its two fifth-generation stealth fighters—the J-20 and the J-31.”

Air Force Plans Next Gen Drone Fleet. Air Force leaders are in the early stages of planning the service’s next-generation drone fleet that could reshape the Air Force’s entire fleet and continue to lower the number of airborne pilots, service officials said. 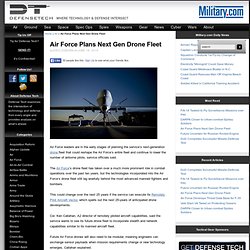 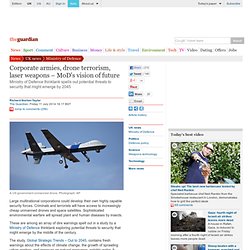 Photograph: AP Large multinational corporations could develop their own highly capable security forces. Criminals and terrorists will have access to increasingly cheap unmanned drones and space satellites. 'The drones never leave Gaza skies...' Aaron Mehta sur Twitter : "The outside and inside of a ground control station. This is what a #drone operator lives in. They have tail numbers. Must-Read Tale Of Predator’s Tortuous Ride To Fame. Hezbollah attack UAV bombs Jabhat al-Nusra. Draft Targeted Killing White Paper. Drones, militarized vision and civilian casualties. Geographical imaginations. A key moment in the development of the United States’ UAV program was the deployment of a prototype Predator – General Atomics’ GNAT-750 – over Bosnia. 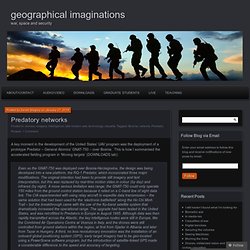 This is how I summarised the accelerated fielding program in ‘Moving targets’ (DOWNLOADS tab): Even as the GNAT-750 was deployed over Bosnia-Herzegovina, the design was being developed into a new platform, the RQ-1 Predator, which incorporated three major modifications. Afghanistan Exit Is Seen as Peril to C.I.A. Drone Mission. Photo WASHINGTON — The risk that may be forced to pull all American troops out of by the end of the year has set off concerns inside the American intelligence agencies that they could lose their air bases used for strikes against Al Qaeda in and for responding to a nuclear crisis in the region. Until now, the debate here and in Kabul about the size and duration of an American-led allied force in Afghanistan after 2014 had focused on that country’s long-term security. But these new concerns also reflect how troop levels in Afghanistan directly affect long-term American security interests in neighboring Pakistan, according to administration, military and intelligence officials.

Autonomous drones. US domestic drone use. US Worldwide deployment. Other models. Drones strikes in Philippines. Reaper drone. Predator drones. UK citizens droned. US citizens droned. CIA. Military UAV Operators. Busine$$ More on drones in general. Anti drones. Who will be controlling the 30,000 Drones that Taxpayers pay for? The end to privacy as we know it! ~ Liberty Bell Press. Is this a mosquito? No. It represents an insect spy drone. Drones. A Drone for US of A & Drones for All. Drones/UAVs. Drones.