Factsheet_GDPR. PanelPicker. The day has finally come and the floodgates are open! 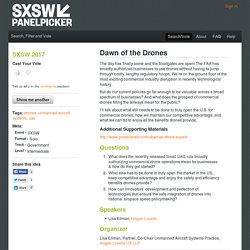 The FAA has broadly authorized businesses to use drones without having to jump through costly, lengthy regulatory hoops. We’re on the ground floor of the most exciting commercial industry disruption in recently technological history. But do our current policies go far enough to be valuable across a broad spectrum of businesses? And what does the prospect of commercial drones filling the airways mean for the public? I’ll talk about what still needs to be done to truly open the U.S. for commercial drones; how we maintain our competitive advantage; and what we can do to enjoy all the benefits drones provide.

Additional Supporting Materials Questions What does the recently-released Small UAS rule broadly authorizing commercial drone operations mean for businesses & how do they get started? Speakers. 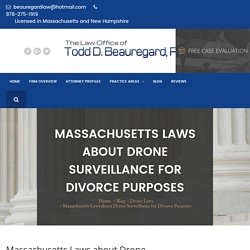 They are used for a number of functions, both commercial and private. They are no longer just for leisure, as when they are flown over an open field or high-ceiling area. Drone Regulations: Federal vs. State. Your first step to building a free, personalized, morning email brief covering pertinent authors and topics on JD Supra: JD Supra provides users with access to its legal industry publishing services (the "Service") through its website (the "Website") as well as through other sources. 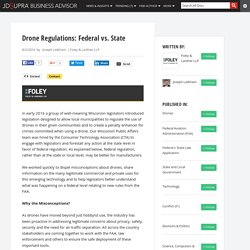 Our policies with regard to data collection and use of personal information of users of the Service, regardless of the manner in which users access the Service, and visitors to the Website are set forth in this statement ("Policy"). By using the Service, you signify your acceptance of this Policy. Drones and Privacy Just Got More Complicated (Table Included) Your first step to building a free, personalized, morning email brief covering pertinent authors and topics on JD Supra: 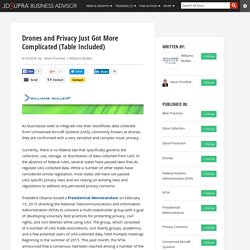 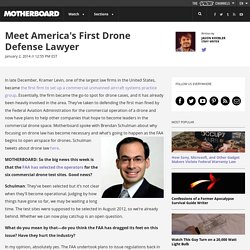 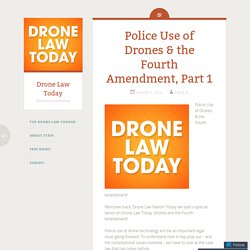 Welcome back, Drone Law Nation! Today we start a special series on Drone Law Today: Drones and the Fourth Amendment! Police use of drone technology will be an important legal issue going forward. Georgetown Public Policy Review / Exploring a Link Between Drone Strikes and Retaliation - Georgetown Public Policy Review. Most of the debate surrounding the United States drone program has focused on its legality and morality, while its effectiveness as a counterterrorism strategy has gone largely unquestioned. 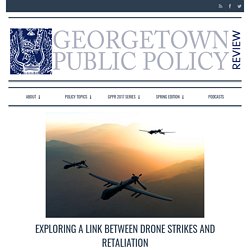 Drone Journalism and the Law. Image courtesy of Flickr user Don McCullough pursuant to a Creative Commons CC BY 2.0 license. 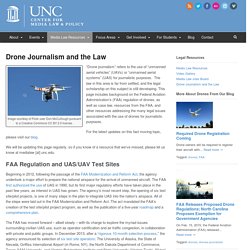 “Drone journalism” refers to the use of “unmanned aerial vehicles” (UAVs) or “unmanned aerial systems” (UAS) for journalistic purposes. The law in this area is far from settled, and the legal scholarship on this subject is still developing. This page includes background on the Federal Aviation Administration’s (FAA) regulation of drones, as well as case law, resources from the FAA, and other resources addressing the many legal issues associated with the use of drones for journalistic purposes. For the latest updates on this fast moving topic, please visit our blog.

We will be updating this page regularly, so if you know of a resource that we’ve missed, please let us know at medialaw [at] unc.edu. FAA Regulation and UAS/UAV Test Sites Image courtesy of the FAA faa.gov/uas/legislative_programs/test_sites/ UK And US Drone Laws And Regulations. By Chelsy Ranard With drones being a relatively new technology, it’s been difficult for drone pilots to have an updated list of laws for their UAV. 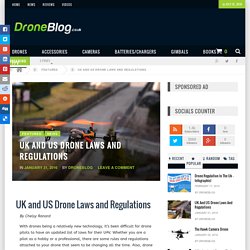 Whether you are a pilot as a hobby or a professional, there are some rules and regulations attached to your drone that seem to be changing all the time. Also, drone laws change in each country, state, and county, which makes it that much more difficult. For professional fliers especially, the inconsistency of the laws can be quite the concern. With so much information out there, much if it is becoming outdated as the laws change. Drones and the Fight for Privacy. Drone technology has developed rapidly over the last few years, and prices for consumer drones have continued to drop. 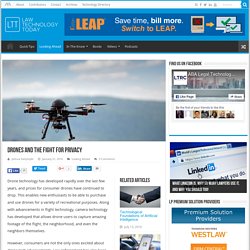 This enables new enthusiasts to be able to purchase and use drones for a variety of recreational purposes. Along with advancements in flight technology, camera technology has developed that allows drone users to capture amazing footage of the flight, the neighborhood, and even the neighbors themselves. However, consumers are not the only ones excited about drone tech advancements.

Law enforcement has also been exploring how drones can be used to see into places that were previously inaccessible. This has led to privacy concerns rising in direct proportion with the affordability of very capable drones. Privacy from flying surveillance is not a new issue. Drones – the privacy, confidentiality and harassment dimensions. How safe from prying lenses do celebrities feel when sunbathing on secluded beaches or by the pool of a private villa? And how safe from prying eyes do you feel barbecuing in your garden or walking around in your flat? Most celebrities probably realise that long-lensed paparazzi may try to position themselves to take a shot they can then sell. Celebrities may take precautions accordingly, perhaps choosing to holiday in villas with high walls. Drones and the Law. Readings: Autonomous Weapon Systems and Their Regulation. National Association of Criminal Defense Lawyers. The National Association of Criminal Defense Lawyers (NACDL) is an American criminal defense organization.

Members include private criminal defense lawyers, public defenders, active U.S. military defense counsel, law professors, judges, and defense counsel in international criminal tribunals, including the ICTY. NACDL, headquartered in Washington, D.C., was founded in 1958, has nearly 9,000 direct members and 90 state, local, and international affiliate criminal defense lawyer organizations with a total of about 40,000 members. The organization has worked to build coalitions of legal organizations in order to provide a forum for important legal issues.

Current Unmanned Aircraft State Law Landscape. Unmanned aircraft systems (UAS), commonly called unmanned aerial vehicles (UAVs) or drones, have a host of applications including law enforcement, land surveillance, wildlife tracking, search and rescue operations, disaster response, border patrol and photography. State legislatures across the country are debating if and how UAS technology should be regulated, taking into account the benefits of their use, privacy concerns and their potential economic impact. So far, 32 states have enacted laws addressing UAS issues and an additional five states have adopted resolutions. Privacy Protection Act. This legislative package is a state-level response to the forthcoming expansion of drone-use by law enforcement agencies within the United States. There are two versions of the legislation that are both ready for introduction in your state. The first requires that a warrant be issued before any law enforcement agency uses a drone within the state.

Tracking and Action Center. At this stage in the ‘drone game,’ the feds are working hard behind the scenes to get states to operate the drones for them. In fact, the primary engine behind the expansion of drone surveillance being carried out by states and local communities is the Federal government itself. Department of Homeland Security issues large grants to local governments so that those agencies can purchase drones. Those grants, in and of themselves, are an unconstitutional expansion of power. The goal? Fund a network of drones around the country and put the operational burden on the states. In fact, this has been as much as confirmed by a drone industry lobbyist who testified in opposition to a similar bill in Washington State, saying that such restrictions would be extremely destructive to the drone market and industry. Melvin Legal – Texas Business Lawyer. Beginner s Guide to Legal Drone Business Antonelli Law. Hire a Drone Law Attorney - Fly Under FAA Part 107.