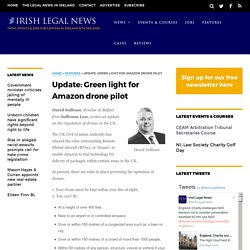 The UK Civil Aviation Authority has relaxed the rules surrounding Remote Piloted Aircraft (RPAs), or ‘drones’, to enable Amazon to trial technology for delivery of packages within certain areas in the UK. At present, there are rules in place governing the operation of drones: 1. Your drone must be kept within your line of sight; 2. At a height of over 400 feet,Near to an airport or in controlled airspace,Over or within 150 metres of a congested area such as a town or city,Over or within 150 metres of a crowd of more than 1000 people,Within 50 metres of any person, structure, vessel or vehicle if your drone has a camera fitted. 3. Drone laws in the UK – what are the rules? Ulrike Franke interviewed on BBC about the role of drones. Itpro.co. Amazon will test its drone delivery service in UK skies in partnership with the British government. 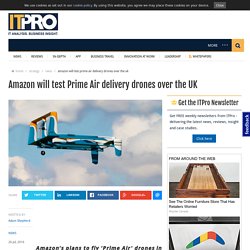 A cross-government team supported by the Civil Aviation Authority (CAA) has given the retailer the green light to conduct tests in the UK. The trials will focus on how well the company's Prime Air drones can identify and navigate obstacles, how they perform when flown beyond the operator's line of sight, and whether a single operator can simultaneously pilot multiple drones. "The UK is a leader in enabling drone innovation - we've been investing in Prime Air research and development here for quite some time," said Paul Misener, Amazon's vice president of global innovation policy and communications. "The UK is charting a path forward for drone technology that will benefit consumers, industry and society," said Misener, promising that the introduction of drone delivery would create jobs.

Some, however, have warned of the dangers of deploying automated drones. Download: Drones » Taylor Wessing. We have updated the content on our Taylor Wessing Download site which provides insights into the legal implications of the latest media and technology developments. 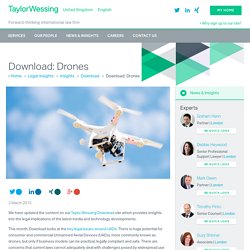 This month, Download looks at the key legal issues around UADs. There is huge potential for consumer and commercial Unmanned Aerial Devices (UADs), more commonly known as drones, but only if business models can be practical, legally compliant and safe. There are concerns that current laws cannot adequately deal with challenges posed by widespread use of UADs.

The future of drone use - taking off or grounded by regulation? What does every tech enthusiast want for their birthday? 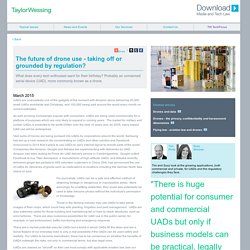 Probably an unmanned aerial device (UAD), more commonly known as a drone. UADs are undoubtedly one of the gadgets of the moment with Amazon alone delivering 20,000 small UADs worldwide last Christmas, and 100,000 being sold around the world every month on current estimates. As well as being increasingly popular with consumers, UADs are being used commercially for a plethora of purposes which are only likely to expand in coming years. The market for military and civilian UADs is predicted to be worth £59bn over the next 10 years and, by 2035, many expect UAD use will be widespread. Drones and data. One of the biggest hurdles to the commercial exploitation of UADs or unmanned aerial devices (UADs) is dealing with the privacy issue. 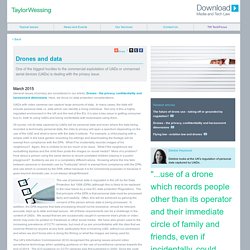 General issues of privacy are considered in our article, Drones - the privacy, confidentiality and harassment dimensions. Here, we focus on data protection considerations. UADs with video cameras can capture large amounts of data. In many cases, the data will include personal data i.e. data which can identify a living individual. Drones. Fly safely or risk prosecution, UK's Civil Aviation Authority warns hobby drone owners. New 'Dronecode' guidance, issued by the regulator in conjunction with air traffic control service NATS and BALPA, the pilots' union, was prompted by "a number of recent incidents involving drones and various aircraft", the CAA said. 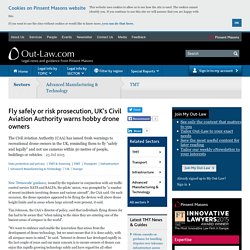 On each occasion, the drone operators appeared to be flying the devices well above drone height limits and in areas where large aircraft were present, it said. NoFlyZone prevents drones from flying over individual property. A Parrot drone. 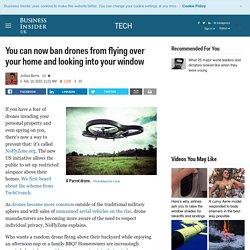 Flickr/Mauricio Lima If you have a fear of drones invading your personal property and even spying on you, there's now a way to prevent that: it's called NoFlyZone.org. The new US initiative allows the public to set up restricted airspace above their homes. We first heard about the scheme from TechCrunch. Drones: law in the UK. Drones – the privacy, confidentiality and harassment dimensions. How safe from prying lenses do celebrities feel when sunbathing on secluded beaches or by the pool of a private villa? 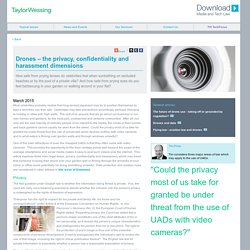 And how safe from prying eyes do you feel barbecuing in your garden or walking around in your flat? Most celebrities probably realise that long-lensed paparazzi may try to position themselves to take a shot they can then sell. Celebrities may take precautions accordingly, perhaps choosing to holiday in villas with high walls. The rest of us assume that we go about our business in our own homes and gardens, for the most part, unobserved and certainly unrecorded. An Introduction to UK Drone Regulations. Note: This is a guest post from Sam over at Heliguy, one of the leading drone retailers and training companies in the UK. 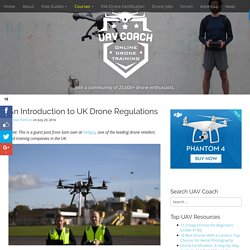 While there aren’t currently any recognized Remotely Piloted Aircraft (RPA) licenses in UK aviation law, it’s essential that those wanting to pilot drones have a basic understanding of existing guidelines. These are detailed in both the Air Navigation Order and Rules of the Air Regulations. Essentially, anybody using a drone, for whatever purpose, has to take full responsibility for ensuring that safety is always made a priority. To support these regulations, the Civil Aviation Authority (CAA) requires that anyone wishing to pilot a drone is able demonstrate a certain level of competence before permissions are issued.

Drones. The ICO recommends that users of drones – also called unmanned aerial systems (UAS) or unmanned aerial vehicles (UAVs) – with cameras should operate them in a responsible way to respect the privacy of others. 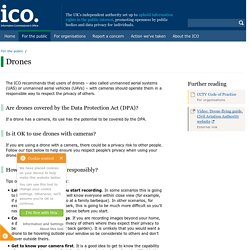 Are drones covered by the Data Protection Act (DPA)? If a drone has a camera, its use has the potential to be covered by the DPA. Is it OK to use drones with cameras? If you are using a drone with a camera, there could be a privacy risk to other people. Follow our tips below to help ensure you respect people’s privacy when using your drone. Smashing Drones. Where To Fly A Drone There was a time when the use of drones or unmanned aerial vehicles (UAVs) was reserved to the military. However, they are now in use in a wide variety of industries, such as aerial surveillance, delivery of medical supplements to inaccessible or remote regions, search and rescue operations, and surveillance of crops. The use of drones by civilians has also been growing, considering how cheap and considerably sophisticated consumer-grade UAVs have become.

However, despite their resemblance to remote-control helicopters, they are not to be regarded as mere toys. No Fly Drones. Summary of UK legal requirements – Droneflight. UK Civil Aviation Authority.