Fukushima, 4 ans après : les réfugiés de l’atome forcés au retour en zone contaminée. Lessons From Fukushima Powerpoint Presentation on Media Censorship and Crisis Communication. Background I was driven to create this presentation by the scale of the Fukushima disaster, and the invisibilityof an adequate response. 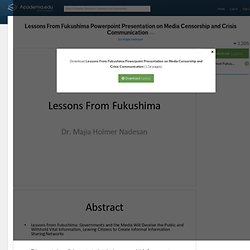 I drew upon my expertise as a scholar of communication to study government and mediareports of the disaster since it began in March of 2011 I study biopolitics, the study of the intersections across (1) economic models; (2) health; (3) anddominant frameworks for interpreting and mitigating disease. In my research I’ve studied autism, as interpreted across scientific paradigms- including biological psychiatry and genetics I’ve also studied how economic models shape attitudes toward the health of the population, in relation to the workplace , childrearing, and environmental risks. To understand the significance of government and media accounts I’ve researched radiation dispersion, radiation fallout and disease, and laboratory research on radiation, cell biology, andDNA.

Tepco took months to release record strontium readings at Fukushima. Japanese gov't conceals high radiation data in Fukushima region from public. The matter is that the three municipalities in question currently have an active evacuation order, which might be lifted soon, and the government supports the lifting. 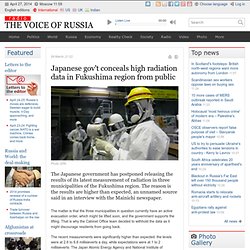 That is why the Cabinet Office team decided to withhold the data as it might discourage residents from going back. The recent measurements were significantly higher than expected: the levels were at 2.6 to 6.6 millisieverts a day, while expectations were at 1 to 2 millisieverts. The Japan Atomic Energy Agency and National Institute of Radiological Science decided to recalculate the results basing on an assumption that people would spend shorter periods outdoors than it is usually assumed in these cases (six hours instead of eight). The new results were submitted to the Cabinet Office team, and they plan to announce them later this month.

Atsuo Tamura from the Cabinet Office team has confirmed the recalculation and unreleased documents, but denied any attempts to conceal anything. Fukushima radiation data is wildly wrong, management apologizes. Fukushima plant area had collapse and subsidence due to the last Typhoon / No press release. Related to this article.. 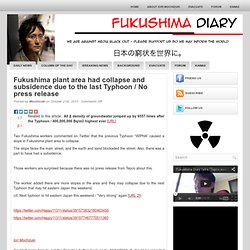 All β density of groundwater jumped up by 6557 times after the Typhoon / 400,000,000 Bq/m3 highest ever [URL] Two Fukushima workers commented on Twitter that the previous Typhoon “WIPHA” caused a slope in Fukushima plant area to collapse. The slope faces the main street, and the earth and sand blockaded the street. Also, there was a part to have had a subsidence. Those workers are surprised because there was no press release from Tepco about this.

How an oceanographer sprung the Nuclear Industry Lie. From late 2011 Japanese and World nuclear authorities claimed that the emissions from the wrecked gaggle of reactors at Fukushima Diiachi no longer emitted radio chemical pollutants into the biosphere. 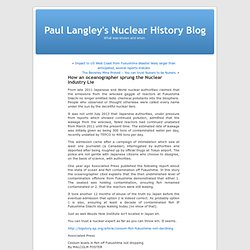 People who observed or thought otherwise were called every name under the sun by the deceitful nuclear liars. It was not until July 2013 that Japanese authorities, under pressure from reports which showed continued pollution, admitted that the leakage from the wrecked, failed reactors had continued unabated from March 2011 until the present time. The estimated rate of leakage was initially given as being 300 tons of contaminated water per day, recently undated by TEPCO to 400 tons per day. This admission came after a campaign of intimidation which saw at least one journalist (a Canadian) interrogated by authorities and deported after being roughed up by official thugs at Tokyo airport. In the Dark With Tepco: Fukushima’s Legacy for Nuclear Power. The Asia-Pacific Journal, Vol. 11, Issue 30, No. 3, August 5, 2013. 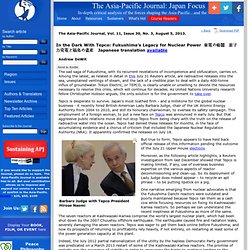 In the Dark With Tepco: Fukushima’s Legacy for Nuclear Power 東電の暗闇 原子力発電と福島の遺産 Japanese translation available Andrew DeWit Send to Kindle The sad saga of Fukushima, with its recurrent revelations of incompetence and obfuscation, carries on. Among the latest, as related in detail in this July 31 Reuters article, are radioactive releases into the sea, unexplained ventings of steam, and the lack of a credible plan to deal with a daily 400-tonne influx of groundwater. Tepco is desperate to survive. But true to form, Tepco appears to have held back official release of this information pending the outcome of the July 21 Upper House elections. Moreover, as the following article highlights, a Reuters investigation from last December showed that Tepco is making limited, if any, use of overseas business expertise on the various aspects of reactor decommissioning and clean–up. 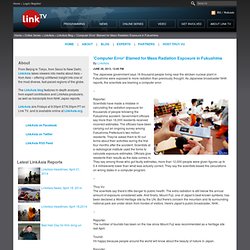 As Japanese broadcaster NHK reports, the scientists are blaming a computer error. Reporter: Scientists have made a mistake in calculating the radiation exposure for thousands of people following the Fukushima accident. Government officials say more than 16,000 residents received incorrect estimates. Fukushima isn’t Chernobyl? By SARAH D. 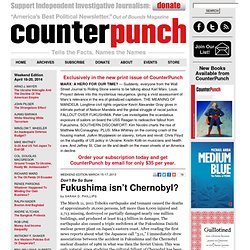 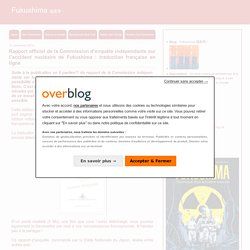 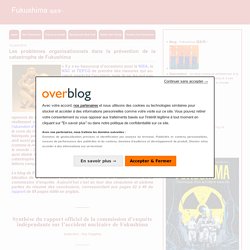 Dr Hida and the Exclusion of Japanese victims of Fallout. The view that the 1945 atomic bombs detonated over Japan did not produce fallout is false. 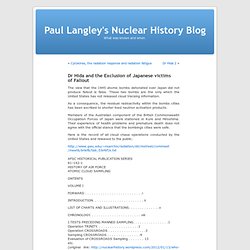 These two bombs are the only which the United States has not released cloud tracking information. As a consequence, the residual radioactivity within the bombs cities has been ascribed to shorter lived neutron activation products. Members of the Australian component of the British Commonwealth Occupation Forces of Japan were stationed in Kure and Hiroshima. The long road to full and open disclosure post Fukushima – Japanese people do it on their own.

Despite the billions taxpayers have paid world nuclear industry since 1939, telling the whole truth and nothinhg but the truth remains alien to it. For that very openness is forbidden to it under the law of various lands, and the prototype is the current US Atomic Energy Act, as amended, from 1954. So, the people in Japan quickly realised that they would have to do it for themselves. Nuclear safety boss questioned over Fukushima disaster. Updated Mon 4 Feb 2013, 9:26am AEDT Japanese police have questioned the former head of the country's peak nuclear safety body regarding possible criminal charges over the Fukushima meltdowns. Haruki Madarame was the head of Japan's Nuclear Safety Commission at the time of the Fukushima meltdowns in 2011. Fukushima residents have filed a criminal complaint against Mr Madarame and 40 others, accusing them of professional negligence.

One of the concerns brought up by the parents was how difficult the survey has made it for parents to obtain the thyroid ultrasound photos of their children. Dr. Fukushima : des ouvriers contraints de mentir sur la radioactivité. Firm told workers at Fukushima plant to lie about radiation dose. Blaming Fear in order to Use the Law to Suppress Information People Need to Know. This is my opinion. I may be right, I may be wrong.Unclassified Controlled Information NRC Atomic Energy Act This regulation stats in part: “Information is designated UCNI only when it is determined that its unauthorized disclosure could reasonably be expected to have a significant adverse effect on the health and safety of the public…..”Unauthorized dissemination subject to civil and criminal sanctions under section 148 of the Atomic Energy Act of 1954, as amended (42 U.S.C. 2168)” ….Violation of Section 148 of the Atomic Energy Act carries a civil fine not to exceed $110,000.

In addition, the individual may be subject to a criminal penalty under Section 223 of the Act….” La presse japonaise se convertit à l'antinucléaire. Fukushima : le rapport qui change tout. Final report criticises weak Fukushima response. It is the fourth and final report into the Fukushima meltdowns, which last year sent clouds of radiation over a wide area and forced tens of thousands of people from their homes.

The report found plant operator TEPCO mishandled its response to the crisis and says its disaster measures were full of holes. It also found TEPCO was ill-prepared to deal with a nuclear accident and its employees were not trained to think flexibly. "Preparedness for a large-scale complex disaster was insufficient; and they were unprepared for the release of a large amount of radioactive materials into the environment caused by a containment failure," the 450-page report said. Nuclear regulators were found to be complacent and obsessed with what the report called the groundless safety myth of nuclear power.

Bernard Laponche chez lui à Paris, le 6 janvier (Audrey Cerdan/Rue89) Anger in Japan Over Withheld Radiation Forecasts. Ko Sasaki for The New York Times Contaminated soil at a school in Koriyama, Japan. Given no guidance from Tokyo, town officials led the residents north, believing that winter winds would be blowing south and carrying away any radioactive emissions. For three nights, while hydrogen explosions at four of the reactors spewed radiation into the air, they stayed in a district called Tsushima where the children played outside and some parents used water from a mountain stream to prepare rice. Fukushima, une population sacrifiée. Accident nucléaire à Fukushima : un « désastre créé par l'homme », selon un rapport.

And some with sufficient skill are wizards at placing frames and clips into the timeline of events at Fukushima. I am not one of those. Lying and hiding the facts ensure that people distrust Nuclear industry and Nuclear “authorities” quite Profoundly. Fukushima: Naoto Kan, l'ancien Premier ministre, reconna t la responsabilit de l'Etat.