RolePlaying GM Online Tools. In this installment of Khayd’haik the Troll Mystic’s series on elementals, he discusses the shapes elementals often take. 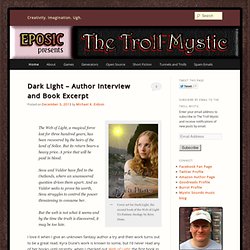 Check out the introductory installment on elementals if you missed it or any previous installments. Elementals do not have a definitive shape, but can take on any three-dimensional form that suits their needs. Any three-dimensional form an elemental takes must occupy its given volume. Typically in its natural state an elemental will take a serpentine shape, sometimes with a face or limbs, but just as often without either. Some elementals, especially stone elementals, are said to prefer large humanoid shapes, giving them the appearance of giants or trolls, often confusing observers who are not particularly observant. A summoned elemental will take whatever form the summoning wizard wishes, subject to the constraint that the form must occupy the elemental’s fixed volume.

Only shadow elementals can take two-dimensional forms. Now let the ice cube melt. Custom Terrain. As avid players of several tabletop games, we understand how deeply an amazing piece of terrain can immerse you into the story. Let us help you take your campaign to the next level with terrain customized just for you. Imagine wrapping up a year long campaign with an amazing custom terrain piece made to your exact specifications. Below are some examples of custom terrain we've built. Click on the images for a closer look. We will work with you to design your terrain piece to your exact specifications. For more information on ordering a custom terrain piece for your adventures, please email us at orders@childrenofmercury.com.

The Suspension of Disbelief » Troll in the Corner. Thanks to flickr user the justified sinner! 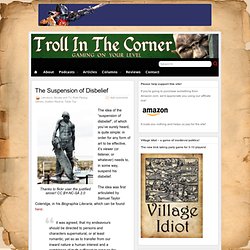 CC BY-NC-SA 2.0 The idea of the “suspension of disbelief”, of which you’ve surely heard, is quite simple: in order for any form of art to be effective, it’s viewer (or listener, or whatever) needs to, in some way, suspend his disbelief. The idea was first articulated by Samuel Taylor Coleridge, in his Biographia Literaria, which can be found here: it was agreed, that my endeavours should be directed to persons and characters supernatural, or at least romantic; yet so as to transfer from our inward nature a human interest and a semblance of truth sufficient to procure for these shadows of imagination that willing suspension of disbelief for the moment, which constitutes poetic faith.

Coleridge’s idea of poetic faith is important. This neatly parallels the relationship between the game-master and the player. After the jump I’ll discuss a couple of ways that the Suspension of Disbelief might affect your games, whether you know it or not. About Nick. Gaming Paper. Character/World Development. Game Design. The RPG Toolbox Free Online Tools. Online RPG Tools. Dungeonographer RPG/Fantasy Dungeon Map Software. Fractal World Generator. City Generator. Inkwell Ideas. Role playing game tools and articles. 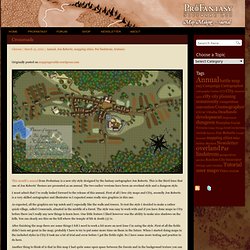 This is the third time that one of Jon Roberts’ themes are presented as an annual. The two earlier versions have been an overland style and a dungeon style. I must admit that I’ve really looked forward to the release of this annual. First of all I love city maps and CD3, secondly Jon Roberts is a very skilled cartographer and illustrator so I expected some really nice graphics in this one. As expected, all the graphics are top notch and I especially like the walls and towers. After finishing the map there are some things I felt I need to work a bit more on next time I’m using the style. Another thing to think of is that in this map I had quite some open space between the forests and in the background texture you can see a pattern. GMing/RPG. This is My Game » Psychology and D&D (Part 1 – The Peak/End Rule)

I am not a psychologist, but I play one on the Internet. 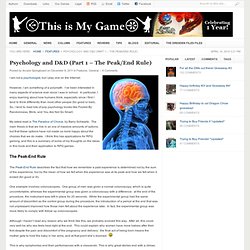 However, I am something of a polymath. I’ve been interested in many aspects of science ever since I was in school. In particular, I enjoy learning about how humans think, especially since I find I tend to think differently than most other people (for good or bad). So, I tend to read lots of pop psychology books like Fooled By Randomness, Blink, and You Are Not So Smart. My latest read is The Paradox of Choice, by Barry Schwartz. The Peak-End Rule The Peak-End Rule describes the fact that how we remember a past experience is determined not by the sum of the experience, but by the mean of how we felt when the experience was at its peak and how we felt when it ended (for good or ill).

One example involves colonoscopies. Although I haven’t read any reason why we think like this, we probably evolved this way. This is why symphonies end their performances with a crescendo.