Curation: The Next Big Thing?

Curating Information as Content Strategy. Content, which is anything that informs, educates, or entertain online, is your business digital body language. 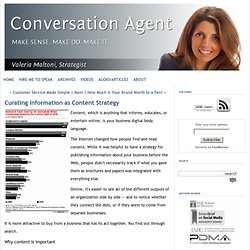 The Internet changed how people find and read content. While it was helpful to have a strategy for publishing information about your business before the Web, people didn't necessarily track if what you gave them as brochures and papers was integrated with everything else. Online, it's easier to see all of the different outputs of an organization side by side -- and to notice whether they connect the dots, or if they seem to come from separate businesses.

It is more attractive to buy from a business that has its act together. You find out through search. Why content is important On the Web, people trade attention for good, useful content. There are still companies that struggle with the idea of becoming content producers, and thus have not yet formulated a content strategy. Some organizations are affected by the sprawling issue when it comes to content. Welcome to the Age of Curation. Forrester Research analyst Sarah Rotman Epps coined a phrase Friday for something many have been talking about since Apple launched the iPad about six weeks ago. 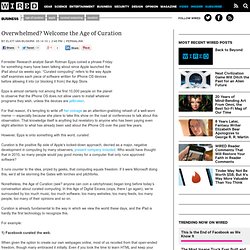 “Curated computing” refers to the way Apple staff examines each piece of software written for iPhone OS devices before allowing it into (or blocking it from) the App Store. Epps is almost certainly not among the first 10,000 people on the planet to observe that the iPhone OS does not allow users to install whatever programs they wish, unless the devices are jailbroken. For that reason, it’s tempting to write off her coinage as an attention-grabbing rehash of a well-worn meme — especially because she plans to take this show on the road at conferences to talk about this observation. That knowledge itself is anything but revelatory to anyone who has been paying even slight attention to what has already been said about the iPhone OS over the past few years. However, Epps is onto something with this word, curated.

Comic strip for 10/30. Curation - The Third Web Frontier. Posted by Guest Writer - January 8, 2011 Here is a guest article by Partice Lamothe - CEO of Pearltrees (Pearltrees is a consulting client of SVW.) This is a lightly edited version of "La troisième frontière du Web" that appeared in the magazine OWNI - Digital Journalism - March 2010. The article argues that the founding pricinciples of the Internet are only now being implemented and that the next frontier is in organizing, or curating, the Internet. By Patrice Lamothe Everyone realizes that the web is entering a new phase in its development. One indication of this transition is the proliferation of attempts to explain the changes that are occurring. Although these explanations are both pertinent and intriguing, none of them offers an analytical matrix for assessing the developments that are now underway. The "real time web," for example, is one of the clearest and most influential trends right now. 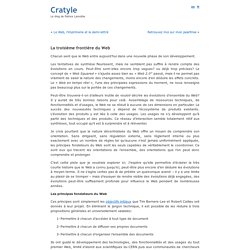 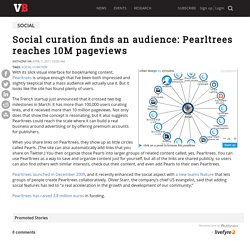 Why Curation is here to stay

What is curation? Curation for your businesses. Social search. Apps. Market structuration. Curation in the Age of Abundance. “A curator is an information chemist. 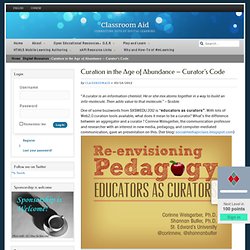 He or she mix atoms together in a way to build an info-molecule. Then adds value to that molecule.” – Scoble One of some buzzwords from SXSWEDU 2012 is “educators as curators”. With lots of Web2.0 curation tools available, what does it mean to be a curator? What’s the difference between an aggregator and a curator ? In this age of information abundance, curation is to leaverage this abundance effectively, we think there are many purposes of curation, here are some situations: - collecting relevant resources or tools for later use, from infinite abundance (sometimes you can’t find a link anymore after leaving it) - organizing texts and resources for learning, educational courses offering is the typical case, while well-crafted curation led by teachers could be valuable, but without having students becoming part of the curating process, the most important part is missed Besides of giving credits to discovery, this means can bring more benefits for us.