Demo: Pure CSS GUI icons (experimental) CSS3 Browser Support and Information. CssSandpaper – a CSS3 JavaScript Library. Remix of images by Parée Erica and Hans Christophersen The cssSandpaper JavaScript library looks at the stylesheets in an HTML document and, where possible, smooths out the browser differences between CSS3 properties like transform, opacity, box-shadow and others. 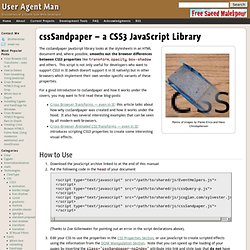 This script is not only useful for developers who want to support CSS3 in IE (which doesn’t support it in IE natively) but in other browsers which implement their own vendor-specific variants of these properties. For a good introduction to cssSandpaper and how it works under the covers, you may want to first read these blog-posts: Cross Browser Transforms — even in IE: this article talks about how why cssSandpaper was created and how it works under the hood.

It also has several interesting examples that can be seen by all modern web browsers.Cross-Browser Animated CSS Transforms — even in IE: introduces scripting CSS3 properties to create some interesting visual effects. How to Use. Css3 Animated Social icons with Tooltip. Path menu in pure CSS3. Demo: Pure CSS GUI icons (experimental) Natural Object-Rotation with CSS3 3D. I finally found some time to finish my short series of tutorials on CSS 3D transforms. 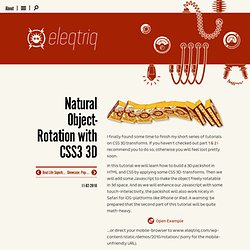 If you haven't checked out part 1 & 2 I recommend you to do so, otherwise you will feel lost pretty soon. In this tutorial we will learn how to build a 3D packshot in HTML and CSS by applying some CSS 3D-transforms. Then we will add some Javascript to make the object freely rotatable in 3d space. And as we will enhance our Javascript with some touch-interactivity, the packshot will also work nicely in Safari for iOS-platforms like iPhone or iPad. A warning: be prepared that the second part of this tutorial will be quite math-heavy. ...or direct your mobile-browser to www.eleqtriq.com/wp-content/static/demos/2010/rotation/ (sorry for the mobile-unfriendly URL). The current State of CSS 3D Since I published my first tutorial a few months ago, more and more sites showed up that actually use CSS3D transforms.

CSSWARP - CSS Text to Path Generator. Masonry CSS or Getting awesome with CSS3. Gotta tell you folks: this one’s been bugging me for a week now. 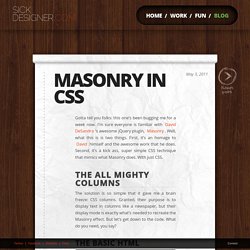 I’m sure everyone is familiar with David DeSandro‘s awesome jQuery plugin, Masonry. Well, what this is is two things. First, it’s an homage to David himself and the awesome work that he does. Second, it’s a kick ass, super simple CSS technique that mimics what Masonry does. With just CSS. The all mighty columns The solution is so simple that it gave me a brain freeze: CSS columns. The basic HTML And the CSS magic An interesting fact: the width of the elements within the columned container is not relative to the width of the parent, but the width of the column. Fallbacks and browser compatibility Of course, our friends at Microsoft have taken good care to not provide support for CSS columns. In Microsoft’s defense, for what it’s worth, my technique does work (well, even!) I’m guessing there’s no point in mentioning that this works (brilliantly) in Gecko and Webkit browsers (Mozilla, Chrome, Safari). Cheers, all! Using CSS3: Older Browsers And Common Considerations - Smashing Magazine.

Advertisement With the arrival of IE9, Microsoft has signalled its intent to work more with standards-based technologies. With IE still the single most popular browser and in many ways the browser for the uninitiated, this is hopefully the long awaited start of us Web craftsmen embracing the idea of using CSS3 as freely as we do CSS 2.1. However, with IE9 not being supported on versions of Windows before Vista and a lot of businesses still running XP and reluctant (or unable) to upgrade, it might take a while until a vast majority of our users will see the new technologies put to practice.

While plenty of people out there are using CSS3, many aren’t so keen or don’t know where to start. This article will first look at the ideas behind CSS3, and then consider some good working practices for older browsers and some new common issues. A Helpful Analogy The best analogy to explain CSS3 that I’ve heard relates to the world of film. A lot about CSS3 can be compared to 3-D technology.