Fake News on Social Media. How is the Language of Shakespeare Different From Ours? By John McWhorter, Ph.D., Columbia University Semantic Changes in English Since the Time of Shakespeare Language change can happen in various aspects, including semantics, pronunciation, and grammar. 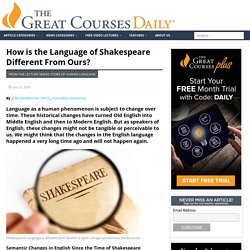 There are a lot of words that have changed their meaning over time. It is because of these semantic changes that we have difficulty understanding Shakespeare. As speakers of modern English, sometimes we even misunderstand Shakespeare because the words or phrases that he used have different meanings in the English of our age. Even educated people, though it’s hard for them to admit, have a difficult time grasping the meaning of Shakespeare’s language. Learn more about dialect representations in Middle English. Paradoxically, foreign speakers do not have trouble understanding Shakespeare. So, the next time you see yourself struggling to sit through a Shakespeare play, don’t be hard on yourself thinking you are an uncultured philistine who does not enjoy arts and literature. 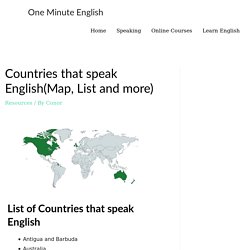 The English language started in England and spread around the world especially to the places where England had colonies. The United States of America is by far the largest country by population(300 million) that speaks English. There are also 60 million in the U.K, 29 million in Canada, 25 million in Australia, and around 5 million in New Zealand and the Republic of Ireland. What are the main countries that speak English? United States of AmericaUnited Kingdom (England, Scotland, Wales and Northern Ireland) CanadaAustraliaIrelandNew Zealand.

How Shakespeare influences the way we speak now - BBC Culture. The History of English in Ten Minutes. A brief history of the English language. Regardless of the many languages one is fortunate to be fluent in, English takes its place as one of the world’s predominant forms of communication with its influences extending over as much as +2 billion people globally. 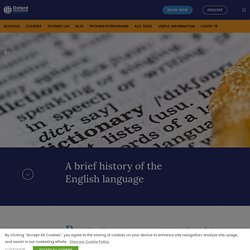 Quirks and inconsistencies aside, the history surrounding its monumental rise is both a fascinating and rich one, and while we promise to be brief, you just might pick up a thing or two that may stimulate your interest in studying English with us here at Oxford International English Schools. Where it all started Many of you will be forgiven for thinking that studying an English Language course consists of English grammar more than anything else. National Geographic Society. A map is a symbolic representation of selected characteristics of a place, usually drawn on a flat surface. 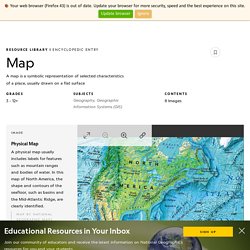 Maps present information about the world in a simple, visual way. They teach about the world by showing sizes and shapes of countries, locations of features and distances between places. Maps can show distributions of things over Earth, such as settlement patterns. They can show exact locations of houses and streets in a city neighborhood.

Mapmakers, called cartographers, create maps for many different purposes. Some common features of maps include scale, symbols and grids. Scale All maps are scale models of reality. The most common type of graphic scale looks like a ruler. The verbal scale is a sentence that relates distance on the map to distance on Earth. The representative fraction does not have specific units. Why we need museums now more than ever. In today’s uncertain times, museums can act as an anchor in the storm. 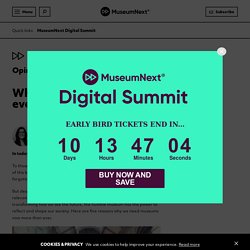 To those who aren’t as passionate about the power of museums as readers of this blog, it can often seem that such institutions are merely places where forgotten objects go to enjoy their final years. But despite this, there’s a strong case to be made that the museum is more relevant today than it has ever been. From addressing key social issues to transforming how we see the future, the humble museum has the power to reflect and shape our society. Here are five reasons why we need museums now more than ever. Learning from the past First and foremost, museums and galleries provide an insight into the history of humankind. This is especially true in times of turmoil. Last year, the Museum of Oxford launched its Queering Spires exhibition to celebrate the ‘hidden history’ of Oxford’s LGBTQIA+ community. But, Howlett went on, it’s a “history hidden in people’s attics, filing cabinets and memories. Former Director Lonnie G. Major Differences in American and British Cultures. 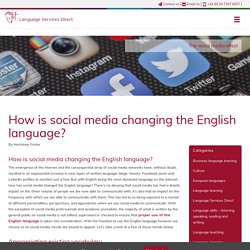 The emergence of the internet and the consequential array of social media networks have, without doubt, resulted in an exponential increase in new types of written language: blogs, tweets, Facebook posts and LinkedIn profiles to mention just a few. But with English being the most dominant language on the internet, how has social media changed the English language? There’s no denying that social media has had a drastic impact on the sheer volume of people we are now able to communicate with, it’s also had an impact on the frequency with which we are able to communicate with them. This has led to us being exposed to a myriad of different personalities, perspectives, and approaches when we use social media to communicate.