BBC iPlayer - Panorama: The Truth About Tax. The 'Tax the Rich' Talk TED Deemed 'Too Political' to Post (UPDATE: Now with Video) Financial Secrecy Index. Johann Hari: Don't allow Cameron to rebrand cuts - Johann Hari, Commentators. The Prime Minister knows it's wildly unpopular to impose the biggest programme of cuts since the 1920s – especially when our national debt has actually been higher for 200 of the past 250 years. 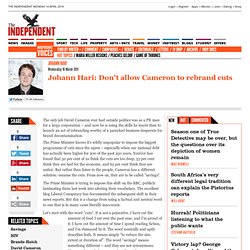 YouGov has found that 50 per cent of us think the cuts are too deep, 53 per cent think they are bad for the economy, and 63 per cent think they are unfair. But rather than listen to the people, Cameron has a different solution: rename the cuts. From now on, they are to be called "savings". The Prime Minister is trying to impose this shift on the BBC, publicly lambasting them last week into altering their vocabulary. The excellent blog Liberal Conspiracy has documented the subsequent shift in their news reports. Let's start with the word "cuts".

Example one. Example two. Example three. If Cameron coaxes the BBC – and others – into rebranding these acts as "savings", he has coaxed them into a lie. To listen to Johann's new series of podcasts click here j.hari@independent.co.uk. David Cameron. Cameron studied Philosophy, Politics and Economics (PPE) at Brasenose College, Oxford, gaining a first-class honours degree in 1988. 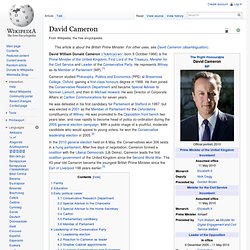 He then joined the Conservative Research Department and became Special Adviser to Norman Lamont, and then to Michael Howard. He was Director of Corporate Affairs at Carlton Communications for seven years. In the 2010 general election held on 6 May, the Conservatives won 306 seats in a hung parliament. After five days of negotiation, Cameron formed a coalition with the Liberal Democrats (Lib Dems). NUS president backs 'direct action' Over the past few months, Liam Burns has watched with admiration – and possibly a little jealousy – the stellar growth of the protest group UK Uncut. 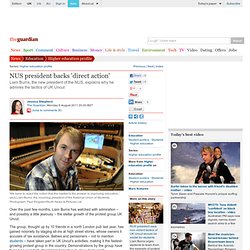 The group, thought up by 10 friends in a north London pub last year, has gained notoriety by staging sit-ins at high street stores, whose owners it accuses of tax avoidance. Babies and pensioners – not to mention students – have taken part in UK Uncut's activities, making it the fastest-growing protest group in the country. Demonstrations by the group have forced several high street bank branches to close temporarily. Carlton Communications. As well as being the parent company of Carlton Television Limited it was also involved in several other media and broadcasting businesses and was a constituent of the FTSE 100 Index. 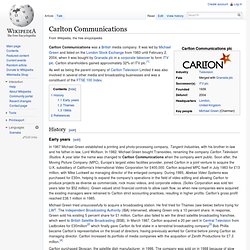 History[edit] Early years[edit] Invest In Our Future. EXCL: disagreements rage at BBC London over ‘cuts’ v ‘savings’ Last week I reported on Liberal Conspiracy that journalists within the BBC were being pressured to replace the word ‘cuts’ with ‘savings’ by senior editors. 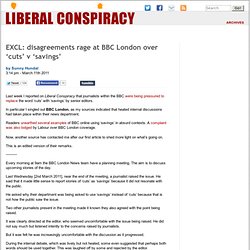 In particular I singled out BBC London, as my sources indicated that heated internal discussions had taken place within their news department. UK Uncut. UK Uncut protest at a Vodafone shop in Glasgow on 30 June 2011. 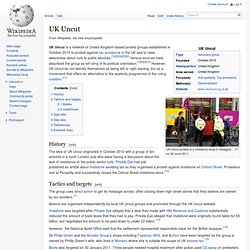 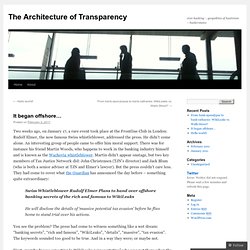 He didn’t come alone. An interesting group of people came to offer him moral support. There was for instance his friend Martin Woods, who happens to work in the banking industry himself and is known as the Wachovia whistleblower. Martin didn’t appear onstage, but two key members of Tax Justice Network did: John Christensen (TJN’s director) and Jack Blum (who is both a senior adviser at TJN and Elmer’s lawyer). But the press couldn’t care less. Swiss Whistleblower Rudolf Elmer Plans to hand over offshore banking secrets of the rich and famous to WikiLeaksHe will disclose the details of ‘massive potential tax evasion’ before he flies home to stand trial over his actions. 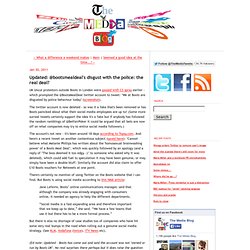 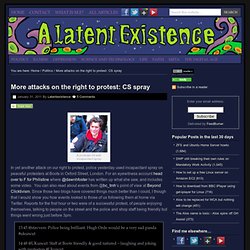 For an eyewitness account head over to F for Philistine where @dawnhfoster has written up what she saw, and includes some video. You can also read about events from @bc_tmh‘s point of view at Beyond Clicktivism. Since those two blogs have covered things much better than I could, I though that I would show you how events looked to those of us following them at home via Twitter. Reports for the first hour or two were of a successful protest, of people enjoying themselves, talking to people on the street and the police and shop staff being friendly but things went wrong just before 3pm.

Untitled. Guest post: UK Uncut, the start of something beautiful. This is a guest post by Nicholas Shaxson, a journalist, writer, consultant, and author of Treasure Islands: Tax Havens and the Men Who Stole the World. 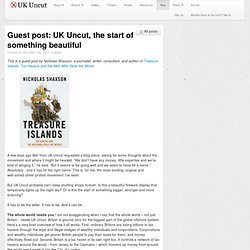 A few days ago Ben from UK Uncut requested a blog piece, asking for some thoughts about the movement and where it might be headed. “We don't have any money, little expertise and we're kind of winging it,” he said. “But it seems to be going well and we seem to have hit a nerve.” Proposal for Target: Shop a Tax Dodger. On the day before the self-assessment tax forms deadline, the BSRC says... So far, the BSRC has gone after high street stores, to great effect. But there are loads of recognisable tax-dodging brands - Walkers, Cadbury, Johnnie Walker, Grolsch - that have got away without being targetted because they don't have shops to shut down. How about on Jan 30th we Shop A Tax Dodger by going into our local supermarkets and clearing the shelves of these products. Here's the idea: We all enter the supermarket in ones and twos, banners hidden so we look like ordinary shoppers. Then all the protesters just have to make sure that those products stay off the shelves for as long as possible.

Guest post: A Thousand Spanners In The Works. This is a guest post by @robsafar from Political Dynamite When I done lived back in Norfolk and got me learned how to write proper-like, I came across a demonstration somewhere around North Norfolk. They were residents of a small, slim village on a road that was getting heavily congested due to industrial developments – they had only a single crossing to get from one side to the other and it was growing dangerous for them.

They'd lobbied the council who'd approved these developments, but to no avail. So they set up a demonstration, a really intelligent one. They made the congestion much worse. Live pictures and video of #ukuncut Twitter channel. Consultancies Gear Up For Corporate Reputation Fight. CS spray used on UK Uncut protest.

30 January 2011Last updated at 20:18 Activists from the group UK Uncut have held similar protests CS spray was used during an arrest of a female protester outside Boots in central London, police have confirmed. The woman had been taking part in a protest organised by the group UK Uncut against stores and brands who they claim avoid tax by registering abroad. The woman was arrested on suspicion of criminal damage. Scotland Yard said CS spray could not cause lasting damage. A Boots spokeswoman said its Swiss registration reflected the "international nature" of the company.

The arrest followed a sit-in by about 20 protesters at the Boots store in Oxford Street that started at lunchtime. Taxman faces probe into £6bn Vodafone 'let-off' By Lucy FarndonUPDATED: 09:15 GMT, 20 January 2011 Tax bosses are facing an inquiry into how they strike deals with multinationals following accusations that Vodafone was let off a £6bn bill. The National Audit Office yesterday confirmed it was in the 'early stages' of the probe and will look into how tax inspectors reach settlements with large firms.

The investigation is the latest in a series of embarrassments for HMRC. Last year it had to admit charging six million people the wrong tax, including 1.4m who had underpaid by a total of £2bn. Previous bungles include losing the personal data and bank details of 25m people, as well as other similar losses of sensitive data. UK Uncut Boots Protest – 30/01/2011. The philosophical significance of UKUncut is increased by Pepper Spray. When activists under the banner of UK Uncut protest outside high-street shops on Saturday 18th December they will be doing something of great political importance. But they will also be demonstrating and articulating something of immense philosophical significance. We republish this outstanding analysis posted in OK in December at the start of the movement against fat cat tax avoidance as the BBC reports CS gas was used against UKUncut demonstrators after a supporter was arrested for "damaging" a shop door of Boots by pushing a leaflet under it.

A brilliant account by Ellie Mae O'Hagan is on the New Left Project. The # UKuncut Daily. Warning: they want us to pay the private sector to make a profit from NHS. Why does the Health Secretary think that the private sector needs a subsidy to be able to enter the market for services now provided by the NHS? Tax Havens Send `Massive Capital' to London, Lawmaker Says. Offshore financial centers, also known as tax havens, send “massive capital flows” to London and are unduly criticized in the U.K. for secrecy and helping tax avoidance, Conservative party lawmaker Mark Field said. 'Big society' suffers setback in showcase Liverpool. Liverpool city council leader Joe Anderson said the need to make £141m of savings had put hundreds of voluntary groups in the city at risk. Big Society. Nat Wei (NatWei) Notts uncut 6th Feb 2011.

David Cameron's new spin doctor and his tax avoidance plan. End Tax Haven Secrecy. Tax Havens G20 (taxhavensg20) Banks and ministers close on Project Merlin bonuses and lending deal. Barclays chief Bob Diamond is expected to get an £8m bonus when his bank kicks off the annual reporting season on Tuesday. The FactCheck Blog - FactCheck: Ed Balls tackles the banking beast. Statement on tax. Our response to their PR. While doing press work over the past three months we have noticed that journalists never ask us for any response on what the companies we have targeted have said in response to our protests.

A Corporate Coup d?Etat. Media Lens Message Board: A Corporate Coup d Etat. To us, it's an obscure shift of tax law. To the City, it's the heist of the century. Rumba Rave "banquero" en el Santander. Anti-cuts: Alliance of defiance. Across Britain, local groups are organising. False Economy lists an impressive 100-plus anti-cuts campaigns – everything from three people painting a banner to groups with hundreds of members. The anti-cuts movement has not only reinvigorated local campaigning, but also raised important questions – crucially, asking how campaigns can involve people who are angry and want to take action but are not used to political or trade union organising.

Oxford Save Our Services (SOS) is one among the plethora of local anti-cuts campaigns. Anti-cuts: Alliance of defiance. Banks' hidden subsidies worth £32bn a year - Business News, Business. UK banks 'getting billions in hidden subsidies' The new economics foundation. Nef (theneweconomics) Squatters move into Guy Ritchie's 6m house ... to set up a free school. Analyst2010. TUC demo on 26 March: for an alternative to austerity. Big Society Bank will start with £60 to £100m in unclaimed assets, say government advisers. A big society cannot emerge from the 'creative destruction' of the state. Stripped Bare.