Maybe It's Time to Occupy the Police State. Public Cops for Private Kochs. In my previous dispatch, I wrote about the Los Angeles Police Department’s long and gnarly history of political surveillance and infiltration of nonviolent groups, beginning with when L.A. was a speculator’s town ruled by a cabal of racist, ultra-reactionary huckster-oligarchs. 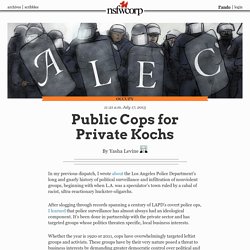 After slogging through records spanning a century of LAPD’s covert police ops, I learned that police surveillance has almost always had an ideological component. It’s been done in partnership with the private sector and has targeted groups whose politics threaten specific, local business interests. Whether the year is 1920 or 2011, cops have overwhelmingly targeted leftist groups and activists. These groups have by their very nature posed a threat to business interests by demanding greater democratic control over political and economic life. 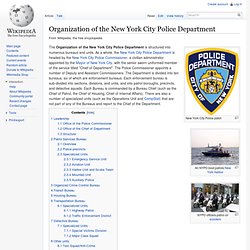 As a whole, the New York City Police Department is headed by the New York City Police Commissioner, a civilian administrator appointed by the Mayor of New York City, with the senior sworn uniformed member of the service titled "Chief of Department". The Police Commissioner appoints a number of Deputy and Assistant Commissioners. The Department is divided into ten bureaus, six of which are enforcement bureaus. NYPD for hire: how uniformed New York cops moonlight for banks. I was surprised two weeks ago to walk into my local TD Bank, on Greenwich Avenue in the West Village, New York to find that the security officer who was usually standing by, on alert, had been replaced by a uniformed, armed, radio-carrying New York Police Department officer, Officer Battle. 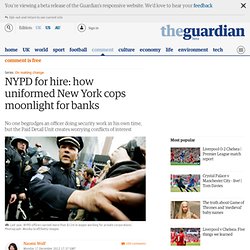 I confirmed from him that he was, in fact, an NYPD officer – and was working part-time for TD bank. Of course, this raised red flags for me. After the violent crackdown on Occupy Wall Street in November of 2011, when that group was having some of its most significant successes in protests and actions that challenged private banks and Wall Street institutions, many wondered what had motivated the unexpected aggression against protesters by local police officers tasked, at least overtly by municipal law, with upholding their first amendment rights.

Who Really Owns The NYPD? Turns Out It's Not Such A Rhetorical Question. Mayor Bloomberg: "I Have My Own Army in the NYPD" Bloomberg calls NYPD his 'Army' DNC 2008 - Who do you protect? Who do you serve? Pragmatism versus Al Qaeda and Toyota. 19 december 2012 - Politics got stuck within the borders of nation states unable to cope with 21st century problems. 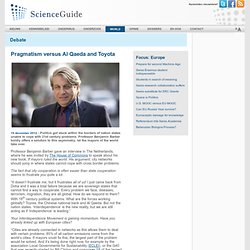 Professor Benjamin Barber boldly offers a solution to this asymmetry: let the mayors of the world take over. Professor Benjamin Barber gave an interview in The Netherlands, where he was invited by The House of Commons to speak about his new book, If mayors ruled the world. Image 4o3e. Quelle Surprise! "J.P. Morgan Chase "donates" $4.6 Million to NYPD" #OccupyWallStreet. Quelle Surprise! 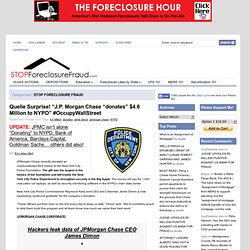 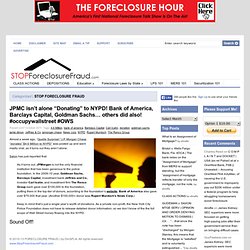 The shocking truth about the crackdown on Occupy. US citizens of all political persuasions are still reeling from images of unparallelled police brutality in a coordinated crackdown against peaceful OWS protesters in cities across the nation this past week. 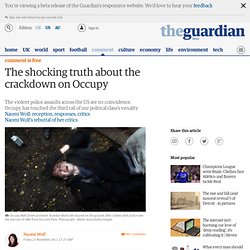 An elderly woman was pepper-sprayed in the face; the scene of unresisting, supine students at UC Davis being pepper-sprayed by phalanxes of riot police went viral online; images proliferated of young women – targeted seemingly for their gender – screaming, dragged by the hair by police in riot gear; and the pictures of a young man, stunned and bleeding profusely from the head, emerged in the record of the middle-of-the-night clearing of Zuccotti Park.

But just when Americans thought we had the picture – was this crazy police and mayoral overkill, on a municipal level, in many different cities? – the picture darkened. This global financial fraud and its gatekeepers. Last fall, I argued that the violent reaction to Occupy and other protests around the world had to do with the 1%ers' fear of the rank and file exposing massive fraud if they ever managed get their hands on the books. 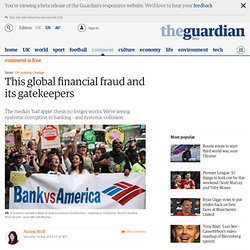 At that time, I had no evidence of this motivation beyond the fact that financial system reform and increased transparency were at the top of many protesters' list of demands. But this week presents a sick-making trove of new data that abundantly fills in this hypothesis and confirms this picture. The notion that the entire global financial system is riddled with systemic fraud – and that key players in the gatekeeper roles, both in finance and in government, including regulatory bodies, know it and choose to quietly sustain this reality – is one that would have only recently seemed like the frenzied hypothesis of tinhat-wearers, but this week's headlines make such a conclusion, sadly, inevitable.

Congress insiders: Above the law? Martha Stewart went to jail for it. 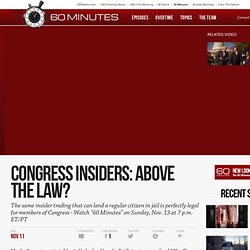 Hedge fund honcho Raj Rajaratnam was fined $92 million and will go to jail for years for it. But members of Congress can do the same thing -use non-public information to make stock trades -- and there's no law against it. Steve Kroft reports on how America's lawmakers can legally make tidy profits on information only they know, simply because they won't pass a law against themselves. The report will be broadcast on Sunday, Nov. 13 at 7 p.m.

Conflict of interest. UC Davis Police Department -on payroll of Uni??!!- Campus police = corporated police. Campus Police or University police in the United States and Canada are often sworn police officers employed by a college or university to protect the campus and surrounding areas and the people who live, work, and visit it. 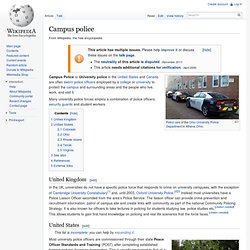 Many university police forces employ a combination of police officers, security guards and student workers. United Kingdom[edit] In the UK, universities do not have a specific police force that responds to crime on university campuses, with the exception of Cambridge University Constabulary[1] and, until 2003, Oxford University Police.[2][3] Instead most universities have a Police Liaison Officer seconded from the area's Police Service. The liaison officer can provide crime prevention and recruitment information, patrol of campus site and create links with community as part of the national Community Policing Strategy. It is also known for officers to take lectures in policing for students studying law, police studies etc.

United States[edit] Bratton to lead investigation of UC Davis pepper-spraying - latimes.com. UC Davis Chancellor Linda Katehi speaks with students at the spot where… (Bryan Patrick / Sacramento…) Former Los Angeles Police Chief William J. Bratton will head a University of California-sponsored investigation into the controversial pepper-spraying of student protesters last week at UC Davis, university officials announced Tuesday. Bratton is to lead an independent review and report his findings within a month, UC President Mark G. Yudof said. Bratton is chairman of the New York-based Kroll security consulting firm, which is being hired by UC for a fee that is still under negotiation, officials said. The Friday incident, in which UC Davis police sprayed the chemical irritant in the faces of nonviolent, seated protesters, has sparked nationwide outrage. “passing off as reform” Yudof's Privatization of the UCPD Investigation. Dear Mark Yudof: The Cemetery You Manage Can Hear You.

Why Are UC Administrators Such Bad Letter Writers, And Why Should We Care? Ask around, and you’ll find it has become a UC-wide habit to disregard letters from the UC administration. I don’t know whether this is the case for the administrators themselves—there is a rumor circulating that Chancellor Birgeneau, for example, did not in fact write the notorious “not nonviolence” letter to which he signed his name. (The claim is that an underling did.) I choose to ignore that rumor, not because it might not be true, but because it’s magnificently irrelevant. He signed his name to it, he allowed it to be sent from his account, and he must be held accountable for the messages he sends to the campus community. Let’s begin with President Yudof’s now-infamous remarks to the New York Times following painful pay cuts: Letter to President Yudof objecting to hiring William Bratton to investigate UC Davis pepper-spray incident – The Council of UC Faculty Associations.

In response to the controversial actions, UC Davis Chancellor Linda Katehi called for an independent investigation. Local police forces are now little armies. Why? ASK THIS | October 06, 2011 More and more, in dealing with nonviolent political protesters police across America show up in battlefield dress with intimidating military gear supplied by the Pentagon and Homeland Security. Frank Serpico. Serpico (1973) - Official Trailer. City Room: Watching 'Serpico' With Serpico. Frank Serpico Talks Ethics and Survival with EMBA Students. Conflict of interest. G4S Lands Major Police Outsourcing Contract. Making the University a Police State. A Message to All Police Officers From Occupy Wall Street Part One. A Message to All Police Officers From Occupy Wall Street Part One. Do We Really Have To Prepare For The Fourth Box? As I watch the legislative abominations named SOPA, PIPA, and NDAA follow the lead of the DMCA and the Patriot Act in the United States, I realize that the worst possible scenario for civil liberties appears to actually be materializing.

The internal talk within the Swedish Pirate Party has long been that it’s our job to prevent Europe from descending into totalitarian fascism. The United States is lost; it is beyond help and repair and will descend. Met facing mounting crisis as activist spying operation unravels. It was shortly after 10am, in a corner at a primary school near Nottingham, that a police agent using the codename UCO 133 began whispering into a microphone hidden in his watch. Mark Kennedy: A journey from undercover cop to 'bona fide' activist. Undercover officer spied on green activists. Mark Kennedy has since quit the Met, telling his friends that what he did was wrong. Undercover police officers - the inquiries. Undercover police cleared 'to have sex with activists' Undercover police officers' lies wrecked lives, say women they duped.

Undercover police had children with activists. Spying on protest groups has gone badly wrong, police chiefs say. Police Corruption. Police State. Mayor Bloomberg: ‘I Have My Own Army’ NYPD Gang Cops Get Serious About Gangs. Cushy NYPD Gang Deployment Apparently Lost in Bermuda Triangle. How the feds fueled the militarization of police - Police. Harry Siegel: What’s With The Rash Of NYPD Scandals? Conflict of interest. I Was Kicked Out of a Mitt Romney Event and Arrested Yesterday. I’m Still Trying to Figure Out Why.

So was he working for the town of Hudson today, or for the campaign? “Both.” Inside ALEC: Naked Contempt for the Press and Public in Scottsdale. Paul Lewis: Crowdsourcing the news. Occupy Highlights Authoritarian Behavior by Police. Plutocracy: CityOfLondon WaltDisney. Occupy Anaheim - Disneyland. BreakThru Radio: Professor Sarah Knuckey on the recently released report that claims the NYPD broke international law in suppres. @SarahKnuckey. Law School Study Alleges NYPD Overstepped its Power During Occupy Protests. NYPD 'consistently violated basic rights' during Occupy protests – study. Guardian: What harsh police are crushing when they crush Occupy. Police protection or citizen censorship? Spain to ban photos and videos of cops.

They Can Do That?! 10 Outrageous Tactics Cops Get Away With. Conflict of interest. Retired #NYPD Detective Speaks About Police Misconduct. Everyone who attended OWS with a cell phone had their identity logged, says security expert. Privacy A Postmortem Part 1. FBI Document—“[DELETED]” Plots to Kill Occupy Leaders “If Deemed Necessary”

Related:  Conflict of interest   -  The shocking truth about the crackdown on Occupy   -  Education   -  Enterprise