#1 Biofuels - Biofuels for Kids. The following facts offer fun and interesting insights into the world of biofuels. 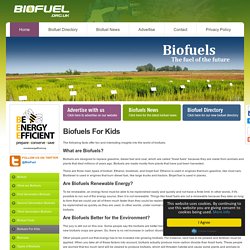 #3 Biofuel Facts and Information. Biofuels have been around as long as cars have. At the start of the 20th century, Henry Ford planned to fuel his Model Ts with ethanol, and early diesel engines were shown to run on peanut oil. But discoveries of huge petroleum deposits kept gasoline and diesel cheap for decades, and biofuels were largely forgotten. However, with the recent rise in oil prices, along with growing concern about global warming caused by carbon dioxide emissions, biofuels have been regaining popularity. #4 Biofuels - Disadvantages of Biofuels - Threat to Food Supply. Biofuel feedstock has to be grown and there is only so much suitable land in the world for growing plants. 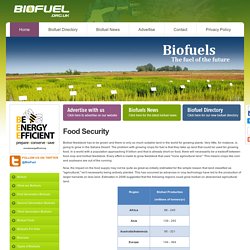 Very little, for instance, is going to grow in the Sahara Desert. #5 Biofuels Pros And Cons. #6 Breaking the Link between Food and Biofuels. Expansion of biofuel production in the United States, Europe, and South America has coincided with recent sharp increases in prices for food grains, feed grains, oilseeds, and vegetable oils. 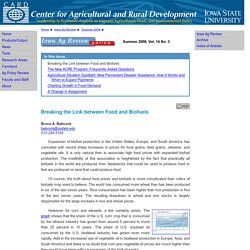 It is only natural then to associate high food prices with expanded biofuel production. The credibility of this association is heightened by the fact that practically all biofuels in the world are produced from feedstocks that could be used to produce food or that are produced on land that could produce food. Of course, the truth about food prices and biofuels is more complicated than critics of biofuels may want to believe. The world has consumed more wheat than has been produced in six of the last seven years.

Rice consumption has been higher than rice production in five of the last seven years. However, for corn and oilseeds, a link certainly exists. Will biofuel leave the poor hungry? It is one of the most hotly debated environmental topics of the year - whether the drive to produce alternative so-called green fuels will take food from the mouths of the hungry. 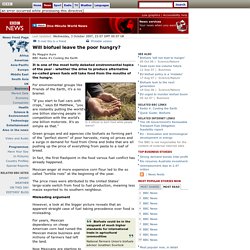 For environmental groups like Friends of the Earth, it's a no brainer. "If you start to fuel cars with crops," says Ed Matthew, "you are instantly putting the world's one billion starving people in competition with the world's one billion motorists. It's as simple as that. " Green groups and aid agencies cite biofuels as forming part of the "perfect storm" of poor harvests, rising oil prices and a surge in demand for food from China and India that are all pushing up the price of everything from pasta to a loaf of bread. In fact, the first flashpoint in the food versus fuel conflict has already happened. Mexican anger at more expensive corn flour led to the so called "tortilla riots" at the beginning of the year. 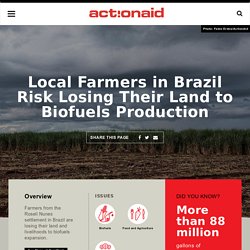 The community of local farmers knew that by working together, they could get better prices for their products, so they formed a cooperative that provides nutritious meals at the local school and produce that is sold at nearby markets. But in the last few years, they have seen a huge expansion in sugarcane production on the land that surrounds them. Today, 14% of Brazil’s total agricultural land is being used to grow sugarcane, most of which is used to make ethanol, a biofuel. In 2015, Brazil produced 667 million metric tons of sugarcane. Some of this ended up in our fuel tanks, as the United States is Brazil’s biggest biofuels customer. This expansion has come at a great cost. #10 Corn to Ethanol 101. #11 How to farm biofuels without harming food security. Researchers contemplating the rise of cellulosic biofuels–fuels produced from non-edible plant fibers that offer a clean, green alternative to petroleum–have drawn up a manifesto to ensure that these crops won’t displace agriculture and threaten future food security. 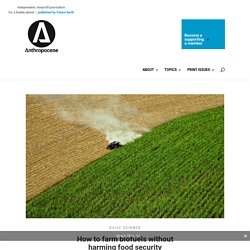 They’ve pinpointed one main solution: if we grow biofuels on marginal lands where agricultural crops can’t flourish, that could help us to simultaneously protect food security, and reduce greenhouse gas emissions. Cellulosic biofuels, made from the fiber of trees and crops like switchgrass, has huge potential to reduce the global emissions impact of conventional fuel. Growing these crops can also keep carbon locked in the soil, and because the fuel doesn’t rely on valuable food crops–as is the case with corn-based biofuels–they pose less of a threat to food security. Ensuring the emissions-reducing benefits of cellulosic biofuels will also depend on how they’re farmed, the researchers say. Source: Robertson et. al. #12 Farmland, Food, and Bioenergy Crops Need not Compete for Land.

Purchase PDF In Brief The need to mitigate the effects of climate change has resulted in some governments setting mandates to attain targets for bioenergy production. 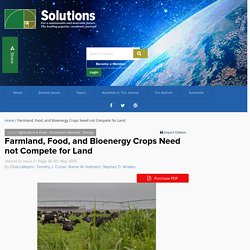 Recently, there has been concern that the large-scale use of first-generation biofuel feedstocks may result in ‘food displacement.’ New second-generation bioenergy crops can be produced on poor soil and provide a potential solution to this problem if grown on marginal land that was previously uneconomic for agricultural production. However, consequences of this production method are biodiversity loss and carbon release if previously fallow land is cultivated. Alternative approaches include utilizing mixtures of native grassland perennials grown on agriculturally degraded lands for bioenergy production and producing biodiesel from microalgae. Key Concepts As the source of two-thirds of global GHG emissions, the energy sector will be pivotal in determining whether or not climate change goals are achieved. Authors. #13 II. Biofuels and household food security. The consensus seems to be that the demand for biofuels will lead to higher commodity prices, although some commodities will be affected more than others. 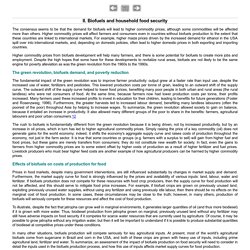 Higher commodity prices will affect farmers and consumers even in countries without biofuels production to the extent that these countries are linked to international markets. For example, higher maize prices driven by the increased demand for ethanol in the USA spill over into international markets, and, depending on domestic policies, often lead to higher domestic prices in both exporting and importing countries. #14 Solutions to Food vs Energy as Presented by the World Food Security Committee. Bioplastics and biodegradable plastics - How do they work? By Chris Woodford. 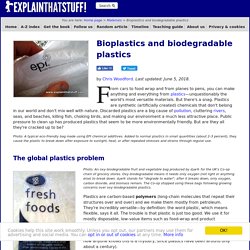 Last updated: June 5, 2018. From cars to food wrap and from planes to pens, you can make anything and everything from plastics—unquestionably the world's most versatile materials. But there's a snag. Plastics are synthetic (artificially created) chemicals that don't belong in our world and don't mix well with nature.

Discarded plastics are a big cause of pollution, cluttering rivers, seas, and beaches, killing fish, choking birds, and making our environment a much less attractive place. Photo: A typical eco-friendly bag made using EPI chemical additives. The global plastics problem Photo: An oxy-biodegradable fruit and vegetable bag produced by d2w® for the UK's Co-op chain of grocery stores.