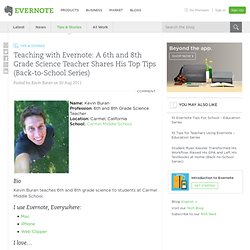 I use Evernote, Everywhere: I love… ScanSnap Scanner for scanning in worksheets and student workJotNot for taking snapshots of my daily itinerary and saving them instantly to Evernote I use Evernote for.. I first heard about Evernote about a year ago, but have become an avid user much more recently. For sharing information with my students Recently, there was a landslide in my area which blocked the roads and kept students from school for several weeks. I put everything my students might need to access —worksheets, articles, and labs — into a Shared Notebook that they can access through a link or via Moodle, a service that our school district has integrated.I have a Scanscap scanner, which I use to shoot worksheets straight into Evernote. Francis Crick - Would you prefer to be Newton or Shakespeare? Online Textbooks Aim to Make Science Leap From the Page. That’s because the book was designed to be digital-only. 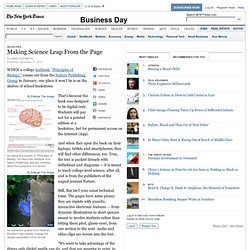 Students will pay not for a printed edition at a bookstore, but for permanent access on the Internet ($49). And when they open the book on their laptops, tablets and smartphones, they will find other differences, too. True, the text is packed densely with definitions and diagrams — it is meant to teach college-level science, after all, and is from the publishers of the august journal Nature. Still, this isn’t your usual technical tome. The pages have some pizazz: they are replete with punchy, interactive electronic features — from dynamic illustrations to short quizzes meant to involve students rather than letting them plod, glassy-eyed, from one section to the next. “We want to take advantage of the things only digital media can do, and that are superior to print, to broaden the ways students learn science,” said Vikram Savkar, senior vice president and publishing director at Nature Publishing.

“Principles of Biology,” Mr. Push, don't pull your eLearners - removing barriers to learning. In the context of eLearning, to me, this is a 'no-brainer' and I find it alarming, disappointing, and depressing, how often people don't get it. 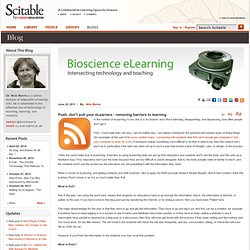 When it comes to eLearning, and getting students and staff involved, I like to apply the KISS principle (Keep It Simple Stupid!). And in that context I think this is where Push comes in as it is so much better than Pull. Surviving the semester: Virtual Learning Environments (VLEs) - Chalkboard. The VLE I have been using is "Chalkboard", which although nowhere near ideal or perfect, it has significantly helped (and at times hindered) my survival of the semester. 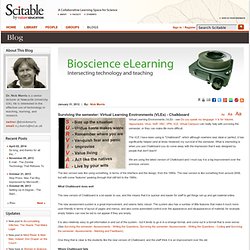 What is interesting is when you use Chalkboard you do come away with the impression that it was designed by people that don't teach! We are using the latest version of Chalkboard and I must say it is a big improvement over the previous version. The last version was like using something, in terms of the interface and the design, from the 1990s.

The new version is like something from around 2008, but with some 'features' peaking through that still hint to the 1990s. What Chalkboard does well. Announcing Principles of Biology, an Interactive Textbook by Nature Education. Interactive Textbooks from Nature Education. Main Page. Courses. Open Educational Resources Project (Collections Strand) - OeRBITAL. UK Centre for Bioscience OER project - Phase 2 The UK Centre for Bioscience sucessfully bid for funding to undertake a 'Collections Strand' Open Educational Resources project over 2010-2011 following its success with the phase 1 (OER pilot projects) Interactive Laboratory and Fieldwork Manual for the Biosciences project. 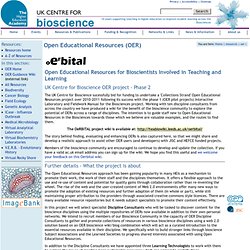 Working with ten discipline consultants from across the country we have produced a wiki for the benefit of the bioscience community to explore the potential of OERs across a range of disciplines. The intention is to guide staff new to Open Educational Resources in the Biosciences towards those which we believe are valuable examples, and the routes to find them. The OeRBITAL project wiki is available at: The story behind finding, evaluating and enhancing OERs is also captured here, so that we might share and develop a realistic approach to assist other OER users (and developers) with JISC and HEFCE funded projects. Main Page - OERbital. The Illustrated Guide to Epigenetics.

Illustrations by Joe Kloc This month marks the ten-year anniversary of the sequencing of the human genome, that noble achievement underpinning the less noble sales of 23andMe's direct-to-consumer genetic tests. 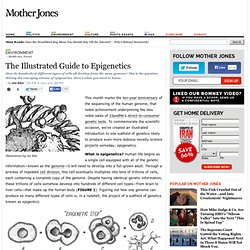 To commemorate the scientific occasion, we've created an illustrated introduction to one subfield of genetics likely to produce even more dubious novelty science projects someday: epigenetics. What is epigenetics? Human life begins as a single cell equipped with all of the genetic information—known as the genome—it will need to develop into a full-grown adult. Through a process of repeated cell division, this cell eventually multiplies into tens of trillions of cells, each containing a complete copy of the genome. FIGURE 1: Through a process called mitosis, a single cell (A) splits into two cells (B) with identical genetic information. FIGURE 2: DNA coils around proteins called histones, forming a nucleosome.