Antarctica, the Effects of Global Warming. The polar regions are particularly sensitive to small rises in the annual average temperature, they are sometimes referred to as "the canary in the coalmine" in that they show changes long before they can be seen elsewhere in the world. 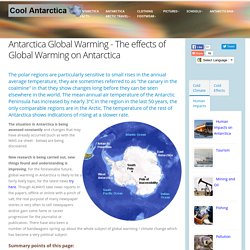 The mean annual air temperature of the Antarctic Peninsula has increased by nearly 3°C in the region in the last 50 years, the only comparable regions are in the Arctic. The temperature of the rest of Antarctica shows indications of rising at a slower rate. The situation in Antarctica is being assessed constantly and changes that may have already occurred (such as with the WAIS ice sheet - below) are being discovered. New research is being carried out, new things found and understanding is improving. For the foreseeable future, global warming in Antarctica is likely to be a fairly lively topic, for the latest news try here.

Summary points of this page: Global warming is real, it is happening more quickly in some parts of the world than others. Ice Cores No. Climate Model Predicts West Antarctic Ice Sheet Could Melt Rapidly. “You could think of all sorts of ways that we might duck this one,” said Richard B. 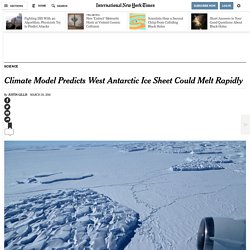 Alley, a leading expert on glacial ice at Pennsylvania State University. “I’m hopeful that will happen. But given what we know, I don’t think we can tell people that we’re confident of that.” Dr. Alley was not an author of the new paper, though it is based in part on his ideas about the stability of glacial ice. But those same scientists emphasized that it was a single paper, and unlikely to be the last word on the fate of West Antarctica. Peter U. Photo Dr. It was his panel that had estimated an upper limit of three feet or so on the likely sea level rise in the 21st century, while specifically warning that a better understanding of the vulnerability of Antarctic ice could change that estimate.

The new research is the work of two scientists who have been at the forefront of ice-sheet modeling for years. In a lengthy interview on Monday, Dr. “We knew something was missing,” Dr. The new idea came from Dr. Ice Shelf Twice the Size of Manhattan Is About to Break Off From Antarctica » Page 2 of 2. Read page 1 “Even in winter, strong winds can prevent the water beyond the shelf from freezing, so it is unclear whether the front will separate soon or hang on like a loose tooth,” NASA said. 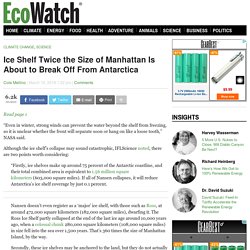 Although the ice shelf’s collapse may sound catastrophic, IFLScience noted, there are two points worth considering: “Firstly, ice shelves make up around 75 percent of the Antarctic coastline, and their total combined area is equivalent to 1.56 million square kilometers (603,000 square miles). If all of Nansen collapses, it will reduce Antarctica’s ice shelf coverage by just 0.1 percent. Nansen doesn’t even register as a ‘major’ ice shelf, with those such as Ross, at around 472,000 square kilometers (182,000 square miles), dwarfing it. Secondly, these ice shelves may be anchored to the land, but they do not actually significantly contribute to sea level rise—after all, they’re already floating on the sea. 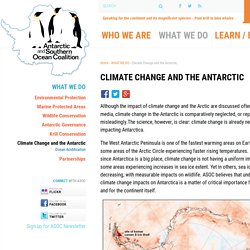 The West Antarctic Peninsula is one of the fastest warming areas on Earth, with only some areas of the Arctic Circle experiencing faster rising temperatures. However, since Antarctica is a big place, climate change is not having a uniform impact, with some areas experiencing increases in sea ice extent. Yet in others, sea ice is decreasing, with measurable impacts on wildlife. ASOC believes that understanding climate change impacts on Antarctica is a matter of critical importance for the world and for the continent itself. Temperature trends in Antarctica between 1981 and 2007, based on thermal infrared observations made by a series of NOAA satellite sensors.