«The Great Mouse Plot» (Roald Dahl) — Anglais. My four friends and I had come across a loose floor-board at the back of the classroom, and when we prised it up with the blade of a pocket-knife, we discovered a big hollow space underneath. 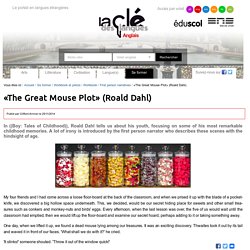 This, we decided, would be our secret hiding place for sweets and other small treasures such as conkers and monkey-nuts and birds' eggs. Every afternoon, when the last lesson was over, the five of us would wait until the classroom had emptied, then we would lift up the floor-board and examine our secret hoard, perhaps adding to it or taking something away. One day, when we lifted it up, we found a dead mouse lying among our treasures.

It was an exciting discovery. Thwaites took it out by its tail and waved it in front of our faces. 'It stinks! ' 'Hold on a tick,' I said. Thwaites hesitated. When writing about oneself, one must strive to be truthful. 'Why don't we', I said, 'slip it into one of Mrs Pratchett's jars of sweets? The other four stared at me in wonder. Writing on the self — Anglais. Hugo Hamilton on memory and fiction Hugo Hamilton is a famous Irish writer. 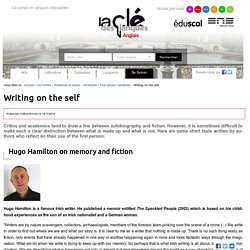 He published a memoir entitled The Speckled People (2003) which is based on his childhood experiences as the son of an Irish nationalist and a German woman. "Writers are by nature scavengers, collectors, archaeologists, members of the forensic team picking over the scene of a crime (...) We write in order to find out where we are and what our story is. It is clear to me as a writer that nothing is made up. Key questions Does Hugo Hamilton believe in fiction? A conversation with Siri Hustvedt Siri Husvedt is an American novelist and essay writer. "It is a strange thing to say but what I am arguing is that the faculty of memory and the faculty of imagination are in fact not so different. Can imagination be completely dissociated from memory according to Siri Hustvedt? A conversation with Patrick McGuinness. Self-portraits — Anglais. Portraits of William Hogarth Here are two self-portraits of William Hogarth, a famous eighteenth century English painter and engraver. 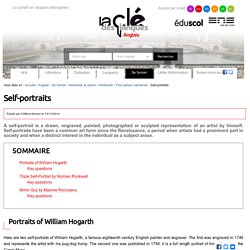 The first was engraved in 1749 and represents the artist with his pug-dog trump. The second one was published in 1758: it is a full length portrait of himself painting the Comic Muse. PORTRAIT of Hogarth with his Dog Trump (HD download) Portrait of Hogarth with the Comic Muse (HD download) Key questions A portrait often suggests the social status or occupation of the subject through the representation of tools, specific garments, symbols, emblems… Is it true of these two self-portraits? Triple Self-Portrait by Norman Rockwell Norman Rockwell was a famous 20th-century American painter and illustrator. Look at the famous self-portraits pinned onto the top right hand corner of the canvas. Mirror Guy by Maxime Roccisano Like Norman Rockwell, the photographer uses a mirror in his composition. Listen and read - Memoir. Behind the Scenes by Elizabeth Keckley Behind the Scenes Or, Thirty Years a Slave and Four Years in the White House is an autobiographical narrative by Elizabeth Keckley. 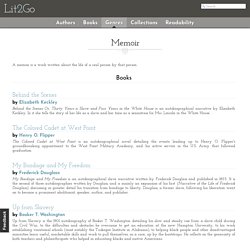 In it she tells the story of her life as a slave and her time as a seamstress for Mrs. Lincoln in the White House. The Colored Cadet at West Point by Henry O. The Colored Cadet at West Point is an autobiographical novel detailing the events leading up to Henry O. My Bondage and My Freedom by Frederick Douglass My Bondage and My Freedom is an autobiographical slave narrative written by Frederick Douglass and published in 1855.