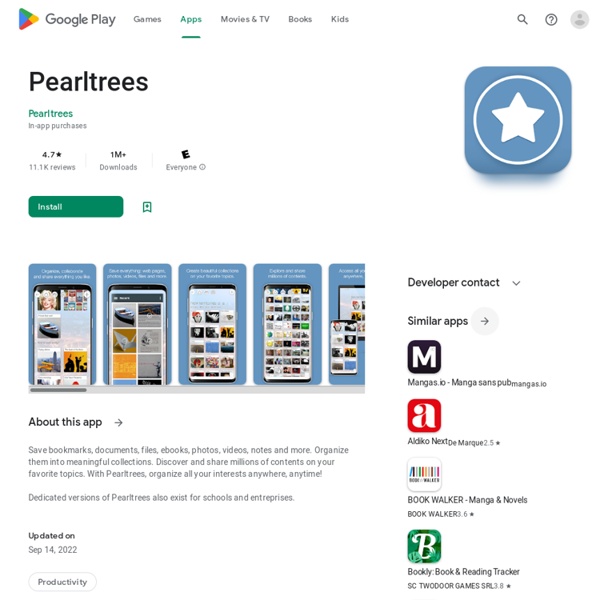 Save bookmarks, documents, files, ebooks, photos, videos, notes and more. Organize them into meaningful collections. Discover and share millions of contents on your favorite topics. With Pearltrees, organize all your interests anywhere, anytime! Dedicated versions of Pearltrees also exist for schools and entreprises. Media says:"The most elegant and visual way of collecting and sharing online content". Pearltrees can be useful in many situations: Personal life: Tech enthusiast? Work: On Pearltrees you can collaborate with your colleagues to manage knowledge efficiently, mutualize best practices, and share notes across your entire company. Education: Pearltrees is now one of the most used tools by teachers and students.

9 lessons about the web and business from Pearltrees, the or Pearltrees is a French startup that wants to change the way we organise the web. Describing how it works would lead you to believe that it’s another social bookmarking site, which would do them injustice. Most of the social bookmarks are organized either alphabetically or chronologically, which doesn’t do much good when you try to retrieve stuff later. Also, due to how most social bookmarking sites were designed, they’ve become more like a curated list of the hottest headlines out there right now, and about what Mashable calls “velocity” – the question: how fast is this thing spreading? This idea of velocity is not what Pearltrees is about – on the contrary, it’s a tool that helps you keep an eye on context and history in the endless stream of blogs, tweets and Facebook posts.

‎Just Ask Siri : App Store Story Siri can do a lot more than set alarms and call your friends. With iOS 12 and Shortcuts, it has the power to use your favorite apps to help you get things done with just a tap or by saying, “Hey Siri.” Want to check the ETA of the next train on your commute? Or reorder a latte just the way you like it (iced, sugar-free vanilla, with soy)? Siri now works hand in hand with a range of apps—and even suggests actions at just the right time. ‎Games for Nongamers : App Store Story Dream of being Thor’s sidekick? Ready to outsmart the killer from I Know What You Did Last Summer? These easy-to-play games take you inside popular movies, TV shows, and books so you can befriend and even battle the characters you love. Solve crimes under Grissom’s watchful eye in What’s Your Story? ‣ In the Choose Your Own Adventure–style game What’s Your Story?, a mysterious newcomer is introduced into the story line of a hit TV show or movie—and that person is you.

‎Words With More Friends : App Store Story So you’re a bona fide wordsmith. In Words with Friends 2, you’re handily winning the 20-odd matches you’ve got going with various friends and family members. You’ve beaten the pants off the bots in the game’s new solo mode. But are you ready to take your vocabulary to the live arena in a highly competitive new spin on multiplayer word battles? ‎New Games on Apple Arcade : App Store Story Apple Arcade is a new service, exclusively from the App Store, featuring groundbreaking new games by the world’s most creative developers. One subscription lets you play all the Apple Arcade games you want, with no ads and no additional purchases. Apple Arcade Rosie's Reality A fun family experience UFO on Tape: First Contact

Circus bear mauls Russian trainer in front of horrified onlookers; investigation launched article Ruslan Solodyuk was performing with Yashka the bear in Olonets as apart of an act when the bear turned on him and attacked. ( Galina Guryeva ) RUSSIA - Onlookers at a Russian circus were horrified Wednesday when a 660-pound brown bear viciously attacked its handler before turning its attention to the audience, prompting officials to launch a criminal investigation. Ruslan Solodyuk was performing with Yashka the bear in Olonets as part of an act where he orders the 16-year-old bear to stand on its two back legs and push around a wheelbarrow. In the video taken by one spectator, the act seems to be going well until the large brown bear turns on Solodiuk and slams him to the ground while biting his arm. Another trainer attempts to intervene by kicking the animal repeatedly.

VIP Membership — IMVU 💰 Credits, Discounts & More ✔ Get 5,000 Credits per month ✔ Enjoy 5% savings off everything in the catalog ✔ Take 10% off of badges ✔ Get more (free) Credits each month you remain a VIP as a loyalty reward