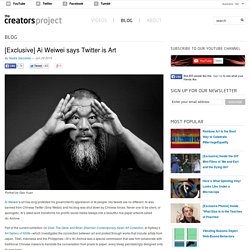 His tweets are no different. Ai was banned from Chinese Twitter (Sina Weibo) and his blog was shut down by Chinese forces. Never one to be silent, or apologetic, Ai’s latest work transforms his prolific social media bleeps into a beautiful rice paper artwork called An Archive. Part of the current exhibition Go East: The Gene and Brian Sherman Contemporary Asian Art Collection, at Sydney’s Art Gallery of NSW—which investigates the connection between art and protest through works that include artists from Japan, Tibet, Indonesia and the Philippines—Ai’s An Archive was a special commission that saw him collaborate with traditional Chinese makers to translate the conversation from pixels to paper; every bleep painstakingly designed onto its own page.

The work is entirely in Mandarin, but Ai's motive is universal and, not surprisingly, he has a few things to say on the topic. Related. 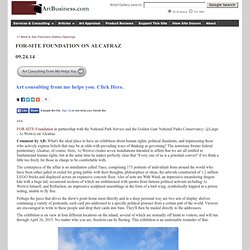 Comment by AB: What's the ideal place to have an exhibition about human rights, political dissidents, and imprisoning those who actively express beliefs that may be at odds with prevailing ways of thinking or governing? The notorious former federal penitentiary Alcatraz, of course. Here, Ai Weiwei creates seven installations intended to affirm that we are all entitled to fundamental human rights, but at the same time he makes perfectly clear that "Every one of us is a potential convict" if we think a little too freely for those in charge to be comfortable with. The exhibition is on view at four different locations on the island, several of which are normally off limits to visitors, and will run through April 26, 2015. Tiananmen Clip from Ai Weiwei: Never Sorry. Moment artist smashed $1 million Ai Weiwei vase.

News - Ai Weiwei: U.S. artist wrong to smash vase. Chinese dissident artist Ai Weiwei, whose activist works included smashing a valuable vase in the name of art, said Wednesday that he was miffed about another artist destroying one of his vases in Florida. 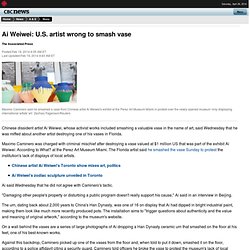 Maximo Caminero was charged with criminal mischief after destroying a vase valued at $1 million US that was part of the exhibit Ai Weiwei: According to What? At the Perez Art Museum Miami. The Florida artist said he smashed the vase Sunday to protest the institution's lack of displays of local artists. Ai said Wednesday that he did not agree with Caminero's tactic. "Damaging other people's property or disturbing a public program doesn't really support his cause," Ai said in an interview in Beijing.

The urn, dating back about 2,000 years to China's Han Dynasty, was one of 16 on display that Ai had dipped in bright industrial paint, making them look like much more recently produced pots.

Evidence. Art Platform ’11: Ai Weiwei. As we walked out the elevators last week to head into the main exhibition hall for Art Platform, something caught out attention in the side atrium. 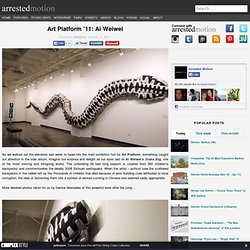 Imagine our surprise and delight as our eyes laid on Ai Weiwei’s Snake Bag, one of his most moving and intriguing works. The undulating 55 feet long serpent is created from 360 children’s backpacks and commemorates the deadly 2008 Sichuan earthquake. When the artist – activist saw the scattered backpacks in the rubble left by the thousands of children that died because of poor building code attributed to local corruption, the idea of fashioning them into a symbol of wicked cunning in Chinese lore seemed sadly appropriate. More detailed photos taken for us by Carlos Gonzalez of this powerful work after the jump… Photo credit: Carlos Gonzalez for Arrested Motion. Ai Weiwei's Snake Makes Huge Statement. Yesterday, Chinese artist Ai Weiwei was named the most powerful person in the art world, according to a poll compiled by ArtReview magazine. 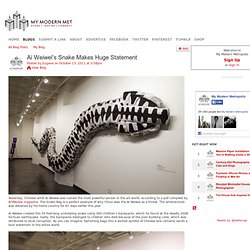 The Snake Bag is a perfect example of why China sees the Ai Weiwei as a threat. The artist/activist was detained by his home country for 81 days earlier this year. AI WEIWEI: NEVER SORRY, a film by Alison Klayman. “Ai Weiwei: Never Sorry” shares a few lessons from Teacher Ai. Ai Weiwei uses his smart phone to take a photograph of a website showing a picture of the Dalai Lama and Myanmar pro-democracy leader Aung San Suu Kyi. 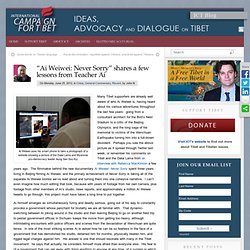 Many Tibet supporters are already well aware of who Ai Weiwei is, having heard about his various adventures throughout the last few years: going from a consultant architect for the Bird’s Nest Stadium to a critic of the Beijing Olympics, and the long saga of his memorial to victims of the Wenchuan Earthquake turning him into a full-blown dissident. Perhaps you saw the above picture as it spread through Twitter last week, or remember his comments on Tibet and the Dalai Lama from an interview with Rebecca MacKinnon a few years ago. Ai Weiwei - magasin 3 stockholm. My meeting with Ai Weiwei in Beijing in the fall of 2010 was the starting point for our work on this exhibition. 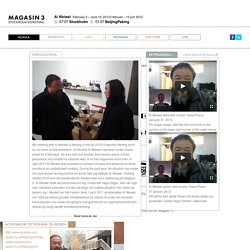 At the time Ai Weiwei had been under house arrest for a few days. He was calm but already then keenly aware of how precarious and unsafe his situation was. A lot has happened since then. In April 2011 Ai Weiwei was arrested on unclear charges and detained for three months in an undisclosed location. During the past year his situation has made him well-known far beyond the art world. The Unilever Series: Ai Weiwei: Sunflower Seeds. 1 of 4 About the exhibition Sunflower Seeds is made up of millions of small works, each apparently identical, but actually unique. 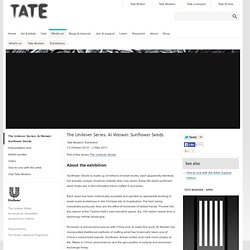 However realistic they may seem, these life-sized sunflower seed husks are in fact intricately hand-crafted in porcelain. Each seed has been individually sculpted and painted by specialists working in small-scale workshops in the Chinese city of Jingdezhen. Far from being industrially produced, they are the effort of hundreds of skilled hands. Porcelain is almost synonymous with China and, to make this work, Ai Weiwei has manipulated traditional methods of crafting what has historically been one of China’s most prized exports. Tate Modern Buys 8 Million of Ai Weiwei’s Seeds. The New York Times reports that London’s Tate Modern has purchased eight million of the 100 million hand-painted, porcelain “sunflower seeds” that were on view as part of Ai Weiwei’s massive installation in the museum’s Turbine Hall last fall. 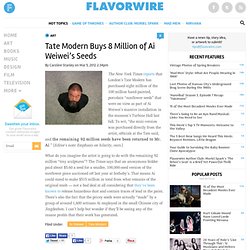 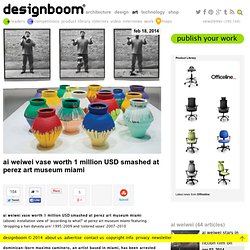 At perez art museum miami featuring ‘dropping a han dynasty urn’ 1995/2009 and ‘colored vases’ 2007-2010 dominican-born maximo caminero, an artist based in miami, has been arrested for intentionally destroying one of renowned chinese artist ai weiwei‘s ‘colored vases’ worth over $ 1 million USD. the 2,000 year old ceramics are currently on exhibit at the perez art museum miami for weiwei’s show ‘according to what?’ Nina azzarello I designboom. 'Ai Weiwei, Absent': Exhibit Focuses On His Inability To Attend (PHOTOS) The Associated Press TAIPEI, Taiwan — Outspoken Chinese artist Ai Weiwei, currently confined to Beijing, is opening an art exhibit in Taiwan that focuses on the political significance of his inability to attend.

The exhibit titled "Ai Weiwei, Absent" debuts at Taipei's Fine Arts Museum on Saturday. In a pamphlet for the show, Ai writes that his absence "is a part of my art, my portfolio and my cultural state. " China's Ai Weiwei gets absent exhibition in Taiwan. TAIPEI Fri Oct 28, 2011 4:23pm BST TAIPEI (Reuters) - A museum in Taiwan will host dissident artist Ai Weiwei's first major exhibition in the overseas Chinese world from Saturday in a move that could upset Beijing. Ai, famed for his work on the "Bird's Nest" Olympic Stadium in Beijing and whose 81-day detention this year caused an international outcry, remains under close watch in China. He was released in late June after he was taken from the Beijing airport and held in two secret locations. Day 81 - Free Ai Weiwei. Ai Weiwei: New York Photographs 1983–1993. 1=1000. Ai Weiwei documenta 12.jpg - Wikipedia, the free encyclopedia.

The evolving collaboration represents the unlimited potential of the Internet to act as mass connector, including an open online interface where visitors can mark (almost like graffiti), explore, and even traverse through a digital moonscape. To coincide with tomorrow's relaunch of a newer and more innovative Moon site, which now offers visitors the chance to act as virtual curator, watch our exclusive look at the inspiration behind the project above.

Originally unveiled at Berlin’s annual Falling Walls conference, Moon offers a platform for visitors around the world to literally leave their stamp on the lunar body. According to Moon curator Marcello Pisu, visitors will now be able to "collect their favorite marks, and share these collections on their social networks. Pure “Coincidences”? – A Look at Ai Weiwei’s Works. The decision whether these are pure “coincidences” is left to the readers. It is just worth noting that even if they were pure coincidences, they would still demonstrate 1. the artist’s lack of knowledge of the history of art 2. the lack of originality of his artistic concepts.