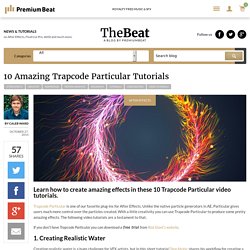 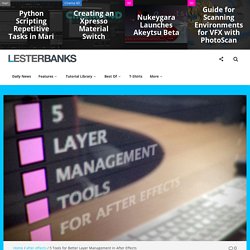 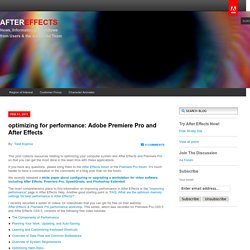 If you have any questions, please bring them to the After Effects forum or the Premiere Pro forum. It’s much harder to have a conversation in the comments of a blog post than on the forum. Realistic Bounce and Overshoot. Goldfish don't bounce. 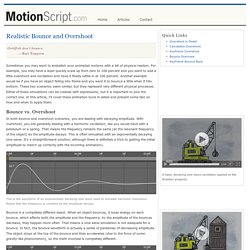 —Bart Simpson Sometimes you may want to embellish your animated motions with a bit of physical realism. For example, you may have a layer quickly scale up from zero to 100 percent and you want to add a little overshoot and oscillation and have it finally settle in at 100 percent. Another example would be if you have an object falling into frame and you want it to bounce a little when it hits bottom. These two scenarios seem similar, but they represent very different physical processes. Bounce vs. In both bounce and overshoot scenarios, you are dealing with decaying amplitude. This is the waveform of an exponentially decaying sine wave used to simulate harmonic resonance. Bounce is a completely different beast. Adobe Add-ons. VSCO Filters for Photoshop (A Series). 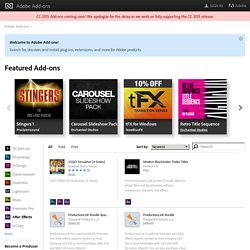 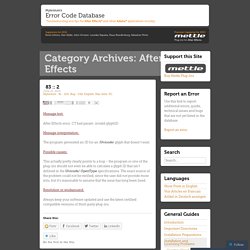 Possible causes: This actually pretty clearly points to a bug – the program or one of the plug-ins should not even be able to calculate a glyph ID that isn’t defined in the Unicode/ OpenType specifications. Resolution or workaround: Always keep your software updated and use the latest certified compatible versions of third-party plug-ins. Top 5 After Effects Expressions for Better Designs - The Beat: A Blog by PremiumBeat. New to using expressions in After Effects? 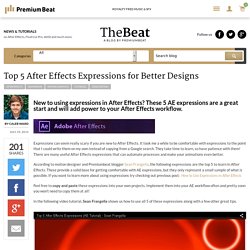 These 5 AE expressions are a great start and will add power to your After Effects workflow. Expressions can seem really scary if you are new to After Effects. It took me a while to be comfortable with expressions to the point that I could write them on my own instead of copying from a Google search. After Effects region of interest. After Effects CC 2015 (13.5) is now available. 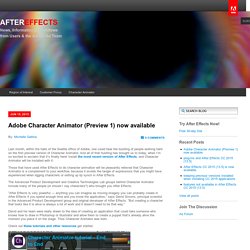 For details about what’s new and changed in After Effects CC 2015 (13.5), see this page. IMPORTANT: Before installing the new version of After Effects, please read this page about the default behavior of the updater, which is to remove all previous versions of the application, and this page about why you might not want to do that. The biggest piece of work for After Effects CC 2015 (13.5) has been a complete re-architecture of how rendering occurs, specifically regarding separating the main render thread from the thread that controls the user interface. 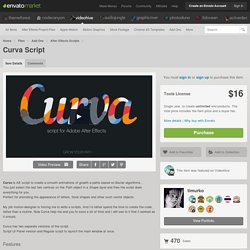 You just select the last two vertices on the Path object in a Shape layer and then the script does everything for you. Perfect for animating the appearance of letters, floral shapes and other such vector objects. My job motion-designer is forcing me to write a scripts. And I’d rather spend the time to create the code, rather than a routine. Now Curva help me and you to save a lot of time and I will see to it that it worked as it should. Curva has two separate versions of the script.Script UI Panel version and Regular script to launch the main window at once. Features Animation appearance of shapes with just a few clicks. Screenshots. After Effects Tutorials, Plug-ins and Stock Footage for Post Production Professionals. After Effects Scripts, Courtesy of CRG. バカ・アフター プラグイン作例(Form・Mir) Trapcode Form・Mirを使った作例集。 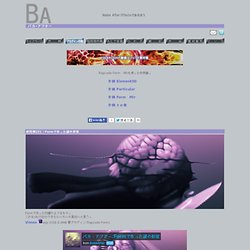 By Kim Sternisha on Sep 12, 2014 at 06:36 AM Jeff Almasol is offering 50 FREE Adobe After Effects Scripts and is encouraging users of his scripts to donate to their favorite community organizations. Jeff Almasol has bundled 50 of his AE scripts together and is generously offering them free on his website, www.redefinery.com He requests that you donate to your favorite community service organization in lieu of payment for these scripts. He makes these utilities in his limited free time, out of the kindness of his heart, and for want of helping others within the After Effects community. Jeff states "If my scripts save you time, maybe pass the savings onto organizations doing good work.

" Jeff is interested to know which scripts are the most benificial to you as well as the organizations to which you are donating. Several other script developers are also involved in the #devforacause project, and are giving a portion of their proceeds from the sale of their scripts to charity. Circles - After Effects Script! — OtherCubed. I'll run through each option on the Controller layer: Main Time Offset (Seconds): The time offset in seconds of the rotation, scale and position properties of the animation layer. Keep in mind that seconds are quite long, so it's normally best to keep this between 0.02 and 0.5. Reverse it to reverse the offset!

The bottom layer will always 'stick' to the keyframes. After Effects. After Effects Templates, Stock Footage, Free Video Tutorials and More! Free Plugins, Free Scripts, Free Presets. Red Giant Serial Key For All Packs Suites ( Plugins For After Effects And Premiere Pro ) Www.LepakBersamaFiq.Blogspot.com - Copyright - Fikri ZamRi **THIS LIST WAS COMPILED BY Fikri ZamRi ON 12 June 2013** This is my collection of over 300 Red Giant serials, found and researched all over the Internet!

If you're installing onto a Mac you may need to remove the hyphens from the serial numbers. These codes have not all been tested, but there are plenty here to try if one of them doesn't work. I take no responsibility for any damage or legal issues that arise from using these serial keys. Aaron dabelow's portfolio. Maxscript Here is a collection of scrips and tools that I have written for 3DSMax over the years. These are free to use, and I have chosen to leave most, if not all of them un-encrypted so you can use and modify them for your own purposes.

Graphics. After Effects. Scripts. New MotionMonkey Adds Motion to Designs in Ae in a Few Clicks. MotionMonkey can help you animate an illustrator or photoshop file in an instant We have another monkey! Dan Ebberts and Orrin Zucker have leveraged the “Monkey” assistance and automation theme into another new product, MotionMonkey.

Realistic Bounce and Overshoot. JavaScript. Simulation. Some Practical Examples OK - let's start putting this all together. First let's look at a decaying sine wave with "decay" set to zero to start with (so that it runs continuously.) As an example, we'll use a pendulum where we'll apply our decaying sine wave (not decaying in this case) expression to the rotation property.

Here's the code: freq = 1.0; //oscillations per second amplitude = 50; decay = 0; //no decay amplitude*Math.sin(freq*time*2*Math.PI)/Math.exp(decay*time) Our "amplitude" parameter is set to 50, so the rotation of the pendulum varies from -50 degrees to +50 degrees and our "freq" parameter is set to 1. Let's Add Some Decay. AE. After Effects Tutorials, Plug-ins and Stock Foot.

Composition. After Effects. After.