Scotland's Future It's in your hands - 00442777.pdf. STILL UNDECIDED? With less than a fortnight to go, there are still many people who have not yet come to a final decision on how to vote on 18th September. 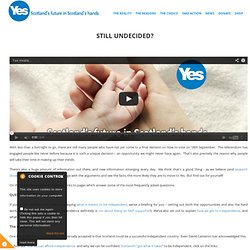 The referendum has engaged people like never before because it is such a unique decision – an opportunity we might never have again. That’s also precisely the reason why people will take their time in making up their minds. There’s also a huge amount of information out there, and new information emerging every day. Scotland's Future It's in your hands - 00442777.pdf. Scotland’s Future - scotlands-future.pdf. Scottish Independence: Darling's Thrashing Proves Folly of Labour's Faustian Pact with Tories. Alex Salmond (r) was the clear winner in the heated debate with Alistair Darling (l)REUTERS/David Cheskin/Pool How did it come to this for the former Labour Chancellor Alistair Darling? 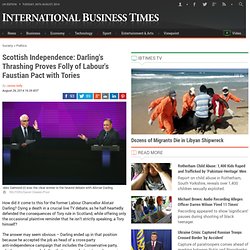 Dying a death in a crucial live TV debate, as he half-heartedly defended the consequences of Tory rule in Scotland, while offering only the occasional plaintive reminder that he isn't strictly speaking, a Tory himself? The answer may seem obvious – Darling ended up in that position because he accepted the job as head of a cross-party anti-independence campaign that includes the Conservative party, which was a poisoned chalice that some unfortunate soul was going to have to grasp. But in fact there was nothing inevitable about any of it. The former Labour First Minister, Henry McLeish, offered a very straightforward way out of the dilemma.

When an audience member asked the ultimate killer question – "if we are Better Together, why are we not Better Together already? " Our man on the scene. There’s been a lot of talk on Twitter and Facebook of irregularities at the referendum counts, leading to accusations that the referendum was somehow fixed, culminating in a petition to have the procedures investigated, or even the referendum re-run. 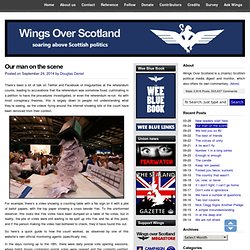 As with most conspiracy theories, this is largely down to people not understanding what they’re seeing, as the videos flying around the internet showing bits of the count have been removed from their context. For example, there’s a video showing a counting table with a No sign on it with a pile of ballot papers, with the top paper showing a cross beside Yes. To the uninformed observer, this looks like Yes votes have been dumped on a table of No votes; but in reality, the pile of votes were still waiting to be split up into Yes and No at this point, and if the person making the video had bothered to check, they’d have found this out.

Welcome to Referendum TV. Scottish Independence: Key questions answered - Top stories. The postponement of the 2015 General Election. Of course the thoughts of anybody from the Glasgow area are with the victims of the Clutha helicopter crash today. 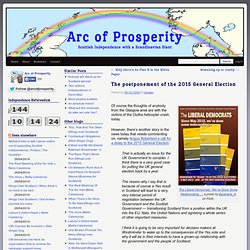 However, there’s another story in the news today that needs commenting on, namely Angus Robertson’s call for a delay to the 2015 General Election: That is actually an issue for the UK Government to consider. Scotland is going it alone – regardless of the referendum. I have spent the last month in a different political world from the one I am used to. 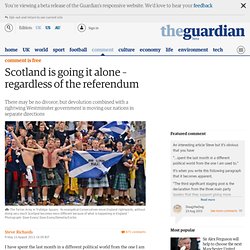 As Scotland prepares for its historic referendum next year on independence, comment pages in the Scottish newspapers are crammed with columns relating to the referendum. Each day there are front-page news stories on the latest twists and turns. Bump into any politician in Scotland, political adviser or pollster, and the talk turns intensely to the battle ahead. Yet the battle is already won. In its political culture and its powers to define what form that culture takes, Scotland is already so incomparably different from England that a form of separation is taking place in front of our eyes. Here we (something) go. Alex Salmond announces Scottish independence referendum date. Alex Salmond has announced that Scotland's independence referendum will be held on 18 September next year, giving the independence movement 545 days to convince a largely sceptical population to say yes to leaving the UK. 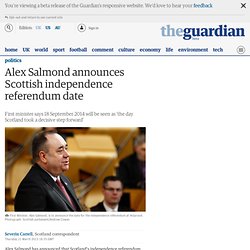 Both the pro- and anti-independence campaigns launched online clocks counting down to referendum day, which the first minister had decided would come four weeks earlier than some expected. Around 4 million voters, set to include 16- and 17-year-olds for the first time in a major poll, will be asked a single six-word question: "Should Scotland become an independent country? " Salmond said 18 September would be "a date which becomes etched in our nation's story as the day Scotland took a decisive step forward to a better, fairer future". Scottish independence is fast becoming the only option.

Those among my friends who have lost their religious faith have described it as a desolate process. 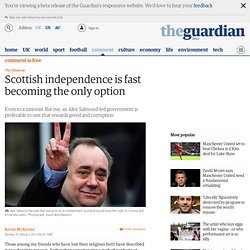 Rather than experiencing a rush of euphoria at liberation from a restrictive credo, they speak of their sadness as, one by one, the illuminations on their once cherished pillars are extinguished. Iain Macwhirter Now and Then: Is the independence referendum already lost? It was a packed and raucous show, with a mostly young audience. 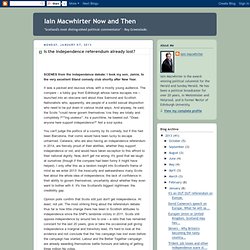 The compere – a tubby guy from Edinburgh whose name escapes me – launched into an obscene rant about Alex Salmond and Scottish Nationalists who, apparently, are people of a sordid sexual disposition who need to be put down in various brutal ways. And anyway, he said, the Scots "could never govern themselves 'cos they are totally and completely f***ing useless". As a punchline, he bawled out: "Does anyone here support independence? " Not a soul spoke. You can't judge the politics of a country by its comedy, but if this had been Barcelona, that comic would have been lucky to escape unharmed.

Opinion polls confirm that Scots still just don't get independence. Joyce McMillan: Political nit-picking serves no-one. The future of Scotland must be determined in broader terms than the simple Yes-No option currently offers, writes Joyce McMillan Welcome 2013: lucky for some, perhaps, but not, it seems, for the unfortunate people of Scotland, doomed as they are to another year of fruitless, divisive and increasingly ill-tempered debate about the nation’s future, as we travel the long, long road to the promised independence referendum of autumn 2014. 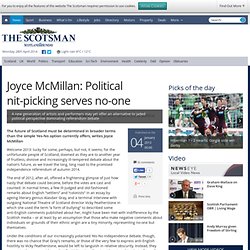 The end of 2012, after all, offered a frightening glimpse of just how nasty that debate could become, before the votes are cast and counted. Under the conditions of our increasingly polarised Yes-No independence debate, though, there was no chance that Gray’s remarks, or those of the very few to express anti-English hostility to Vicky Featherstone, would be left to languish in relative obscurity. Citizen Space - Your Scotland, Your Referendum. Your Scotland, Your Referendum. ERS backs no strings referendum. The SNP have welcomed support from the Electoral Reform Society for the principles that no strings should be attached by the UK Government to Scotland's referendum. 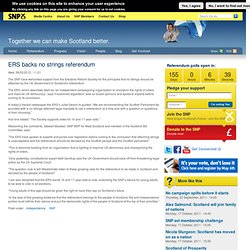 The ERS, which describes itself as “an independent campaigning organisation to champion the rights of voters and improve UK democracy”, says it examined legislation, took on board opinions and spoke to experts before coming to its conclusion. The Electoral Reform Society blog. The likelihood of Scotland voting in a referendum on independence was something most Scots had accepted would occur at some stage before the next Scottish Parliament election in 2016. We talked about it in passing, but we didn’t really know how or when it would happen. Suddenly then, in January this year, the debate became all about details. Peter Duncan: Ten Tartan Rules to win the referendum for the Union Comment. Editorial: This pluralist Yes campaign is a new kind of politics. To the untrained eye, the campaign for independence is still struggling to find its feet. Stagnant polling and Olympics mania has given the No campaign a swagger that eventually bubbled over into full-blown chauvinism with Ian Davidson’s outburst on Newsnight Scotland last week.

In the few areas of Davidson’s brain that do anything other than collect dust, the attitude is clear: Not only are Scots disallowed from making any movement towards constitutional change without the express permission of Westminster, but anybody who even ventures the possibility of an alternative arrangement must be biased. Davidson’s rant, dealt with admirably by host Isobel Fraser, illustrated a sad reality of the No campaign: Scottish Labour, and their unionist allies in the Liberal Democrats and Conservatives, have learned nothing from their shared electoral disappointments of 2011 and 2012. Two examples: firstly, the Olympics and the social union.

It’s that pluralism that is our real advantage. Alister Rutherford: Referendum Questions. The Scottish government has earlier this year announced the wording of the question it would put to the Scottish electorate in the forthcoming Independence referendum. Scots would be asked: “Do you agree that Scotland should be an independent country?” Whilst the various Unionist groups are now in favour of an independence referendum, they are not at all happy with this question.

Though at first most of them seemed to agree that it provided a clear and simple question. However now there have been repeated suggestions that the proposed question is a leading question and that voters should somehow be given two options - both of which you can vote yes to! Not immediately clear that this would provide precision and clarity.

Anyway, to help clarify matters a little, I have done a brief google search on questions used in independence referendums. Only a fool would call the Scottish independence referendum at this distance. “Scots, wha hae wi’ Wallace bled – Scots, wham Bruce has aften led – Welcome to your gory bed. Or to victorie!” Punditry is not an art that suits the modest. Anyone asking people to take time and trouble to read their writing, let alone expecting them to pay for the privilege, is usually best advised to claim some sort of special knowledge or insight that repays the time invested in reading their thoughts. In that context, I suppose I can’t be surprised at the number of confident predictions being made about the Scottish independence referendum.

Yet, as David Cameron’s intervention yesterday showed, the world is full of unknown unknowns, to use Donald Rumsfeld’s much parodied but actually sensible phrase. We are still somewhere between 2 and 4 years away from a referendum on Scottish independence. Lesley Riddoch: Choice cut not to everyone's taste. Salmond's second question strategy. Here's a little thing I learned a while ago. If outcomes conflict with your expectations, first question your expectations.

Declaration. A vote for independence, not for Salmond's policies. Cameron now "not fussy" about referendum date. Wednesday, 16 May 2012 10:13. More than one referendum needed, says Nigel Smith - Politics. We need to have a One Question Referendum. It is that simple! How to win a Scottish Referendum – ten iron laws. Moore echoes Douglas-Home's infamous 1979 promise of "something better"

Saturday, 11 February 2012 20:12 by a Newsnet reporter The SNP has accused Lib Dem Secretary of State for Scotland, Michael Moore of 'impersonating' the 1960s Tory Prime Minister Sir Alec Douglas-Home by promising things will improve if they vote against independence for Scotland. The SNP comments came after Mr Moore apparently made an unspecific offer of additional powers for the Scottish Parliament if Scots vote 'No' in the 2014 ballot. However, when pressed, Mr Moore was unable or unwilling to specify what extra powers Westminster would offer.

'Holyrood has authority over referendum' Custom byline text: Another side of Lesley Riddoch: Referendum – the missing middle way. Garve Scott-Lodge - A Sorry Excuse for a Blog. 14 January 2012.