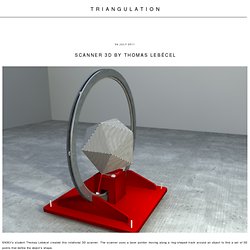 The scanner uses a laser pointer moving along a ring-shaped track around an object to find a set of 3D points that define the object’s shape. ENSCI is a product design school in Paris, I recommend check all projects from the different students, there are really great works. See more; "The realization of 3D files, is now essential for the programming of machining on all types of CNC machines. Make these 3D files can be complicated and tedious, especially when we want to achieve complex shapes. Ring-shaped 3D Scanner. 3M Pocket Projector (3M MPro160): Electronics. Swi_2006_09_konferenz_dagm.pdf (application/pdf Object) Gnome Scan #1 by tbuser.

Volume 21 - Page 54-55. Generating 3D Models of Your Face in Real-time with RGB. Toshiba's researchers can generate real time models of your face using just one camera and some red, green, and blue lights. 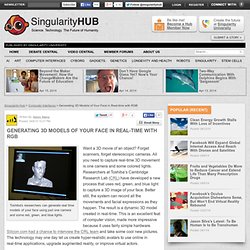 Want a 3D movie of an object? Forget scanners, forget stereoscopic cameras. All you need to capture real-time 3D movement is one camera and some colored lights. Researchers at Toshiba’s Cambridge Research Lab (CRL) have developed a new process that uses red, green, and blue light to capture a 3D image of your face. Better still, the system can record all the movements and facial expressions as they happen. MakerBot 3D Scanner. Download MeshLab software for free. The New Light in Thermal Imaging. Homemade 3d laser scanner overview. Homemade 3d laser scanner. Homemade 3d scanner - the working principle. Setup:the basic setup consists of a line laser module, a pc cam and a stepper motor controller card connected to one stepper motor. the laser is mounted on top of the stepper motor axis. the camera is placed at a well defined position with respect to the laser (the maximum detail resolution of the digitized part is determined by the resolution of the stepper motor, its gearing and the resolution of the cam). the object is placed in front of the cam in such a way that as much as possible of it is visible to the cam. at the same time the laser should be able to sweep the entire part, generating a well visible line on the object. 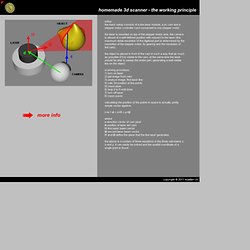 3D Scanning System. The last couple of years have seen an explosion in home fabrication, with fantastic projects like RepRap and Fab@Home really helping to bring the open source community together. 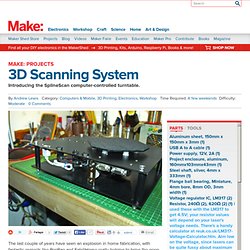 Unfortunately, 3D scanning — in many ways the flipside of the home fabrication coin — seems to have fallen by the wayside. I decided to start the 3D scanning ball rolling by creating the SplineScan computer-controlled turntable. The turntable uses a gearbox for precise positioning, and has fixings for lasers, lights, and cameras. The obvious use of the turntable is for 3D scanning, although it can be adapted very easily to rotate objects for accurate photography or interactive display. Tutorials. Tutorial videos take you step by step through the various features and capabilities of PhotoModeler and PhotoModeler Scanner. 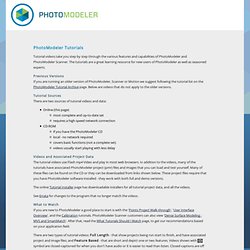 The tutorials are a great learning resource for new users of PhotoModeler as well as seasoned experts. Previous Versions If you are running an older version of PhotoModeler, Scanner or Motion we suggest following the tutorial list on the PhotoModeler Tutorial Archive page. Below are videos that do not apply to the older versions. Tutorial Sources There are two sources of tutorial videos and data:

What is NI X Series? X Series devices are the most advanced multifunction data acquisition (DAQ) devices ever designed by National Instruments. 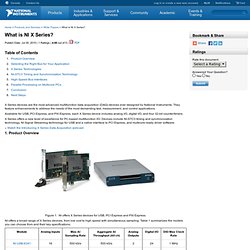 NI Vision Acquisition Software is driver software for acquiring, displaying, logging, and monitoring images from a multitude of camera types. 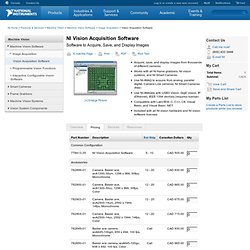 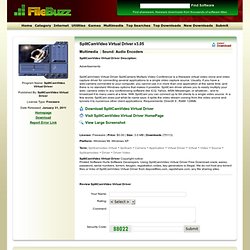 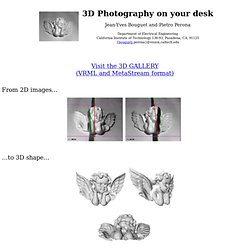 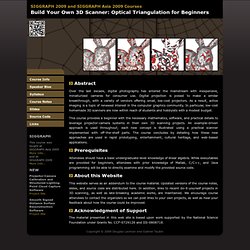 3D Scanning using Swept-Planes The goal of this project is to build an inexpensive, yet accurate, 3D scanner using household items and a camera. Specifically, we describe how to implement the "desktop scanner" originally proposed by Jean-Yves Bouguet and Pietro Perona, composed of five items: a camera, a point-like light source, a stick, two planar surfaces, and a checkerboard. By waving the stick in front of the light source, the user can cast planar shadows into the scene. Afterward, the depth at each pixel can then be recovered using simple geometric reasoning. Here we provide a complete MATLAB implementation, as well as several sample sequences for reconstruction.

3D Laser Scanner - Hacked Gadgets - DIY Tech Blog. Cornell University has just completed their ECE 4760 Designing with Microcontrollers Final Projects. There are lots of great projects, this 3D Laser Scanner by Ryan Dunn and Dale Taylor looks to be a flexible scanning system. Code and schematics are provided so that you can learn from their project. Cool DIY 3D Scanner!

Grape3D. A Simple 3D Scanner - Wikiid. There are many ways to scan a three dimensional object into the computer. The system described here is not perfect for every application - but is cheap, easy to implement and works for most small-ish objects. This is a 'HOW TO' - but it assumes that you have some basic construction skills, and that you are reasonably familiar with computer software and image editing. En.myinventions.pl - blender, arduino, processing, 3d scanning. ProFORMA: Probabilistic Feature-based On-line Rapid Model Acquisition. Cambridge University Engineering Department - Qi Pan. ProFORMA: Probabilistic Feature-based On-line Rapid Model Acquisition Qi Pan, Gerhard Reitmayr and Tom Drummond Proc. BMVC'09, September 2009, London, UK The generation of 3D models is very useful for many computer vision applications. This paper introduces ProFORMA, a system designed to enable on-line reconstruction of textured 3D objects rotated by a user's hand.