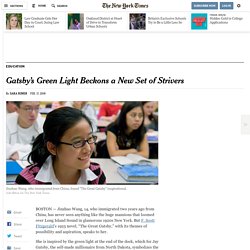 But ’s 1925 novel, “The Great Gatsby,” with its themes of possibility and aspiration, speaks to her. She is inspired by the green light at the end of the dock, which for Jay Gatsby, the self-made millionaire from North Dakota, symbolizes the upper-class woman he longs for. “Green color always represents hope,” Jinzhao said. “My green light?” Some educators say the best way to engage racially and ethnically diverse students in reading is with books that mirror their lives and culture. The novel had fallen into near obscurity by the time Fitzgerald died in 1940, said Charles Scribner III, whose great-grandfather signed the author with the family publishing company in 1919.

Its popularity soared after Robert Redford played Gatsby in the movie in 1974. Several of her classmates disagreed. Training for Oral Comprehension. "Fight for the American Dream" Say Mexican Families of Dreamers. Mexican immigration slows as ‘better life’ in US proves elusive. [vc_row][vc_column width=”1/1″][vc_tabs][vc_tab title=”English” tab_id=”1426710319-1-8″][vc_column_text] Julio Cesar Estelar packed his bags, forked over thousands of pesos and set out for the U.S. 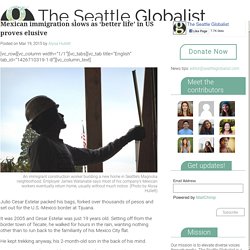 -Mexico border at Tijuana. It was 2005 and Cesar Estelar was just 19 years old. Setting off from the border town of Tecate, he walked for hours in the rain, wanting nothing other than to run back to the familiarity of his Mexico City flat. He kept trekking anyway, his 2-month-old son in the back of his mind. Everyone told him he could make a lot of money in the states; he planned to send it back to his son’s mother, in hopes of building him a better life. With the help of a “coyote,” eventually, he made it to Los Angeles. Within five months, he had reliable job with a construction company, building houses in the rain and the cold. He thought of that money while he sat, silent and alone, slurping bowls of his newfound favorite Vietnamese pho soup. He didn’t care. “Americans are lazy,” he complains. Reality of the American Dream for Mexican Immigrants in New York City - NYU Magazine. Mexican immigrants typically cross the border into the United States in pursuit of the American Dream. 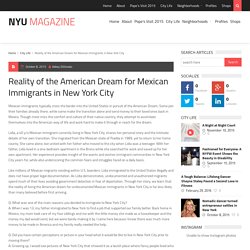 Some join their families already there, while some make the transition alone and send money to their loved ones back in Mexico. Though most miss the comfort and culture of their native country, they attempt to assimilate themselves into the American way of life and work hard to make it through in reach for the dream. Lidia, a 40 y/o Mexican immigrant currently living in New York City, shares her personal story and the intimate details of her own transition. She migrated from the Mexican state of Puebla in 1989, yet to return to her home county. She came alone, but united with her father who moved to the city when Lidia was a teenager. Like millions of Mexican migrants residing within U.S. boarders, Lidia immigrated to the United States illegally and does not have proper legal documentation.

Q: What was one of the main reasons you decided to immigrate to New York City? What is DACA and why is the Trump administration ending it? DACA: What is it? 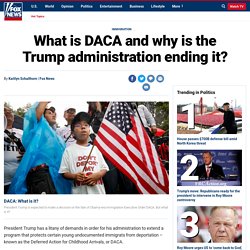 President Trump is expected to make a decision on the fate of Obama-era immigration Executive Order DACA. But what is it? President Trump has a litany of demands in order for his administration to extend a program that protects certain young undocumented immigrats from deportation – known as the Deferred Action for Childhood Arrivals, or DACA. The president’s requests include stronger crackdowns on so-called sanctuary cities, building his oft-promised border wall and overhauling the country’s green card system. “This plan will work. But the administration’s proposals have already angered key Democrats who met with Trump last month. “This proposal fails to represent any attempt at compromise,” House Minority Leader Nancy Pelosi and Senate Minority Leader Chuck Schumer said in a joint statement Sunday night. “We told the president at our meeting that we were open to reasonable border security measures … but this list goes so far beyond what is reasonable,” Pelosi added. 1930s: The Grapes of Wrath.

America in the 20th Century The Roaring Twenties.