06 Graphical Transformations on Spectrograms. Mobius 2.0 Installation Guide. April 2012 Welcome and thank you for your interest in Mobius, the world's most powerful live-looping software! 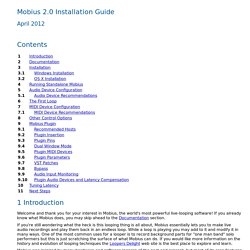 If you already know what Mobius does, you may skip ahead to the Documentation section. If you're still wondering what the heck is this looping thing is all about, Mobius essentially lets you to make live audio recordings and play them back in an endless loop. While a loop is playing you may add to it and modify it in many ways. One of the most common uses for a looper is to record background parts for "one man band" solo performers but this is just scratching the surface of what Mobius can do.

Mobius was inspired by many hardware and software loopers of the past and present, but most of its core features can be traced to the Gibson Echoplex Digital Pro (EDP) with Loop IV software. Be warned that Mobius is a complex program with an enormous number of options. Scripting Processing With MIDI: 12 Steps. This setup allows multiple devices to lay the role of grid. 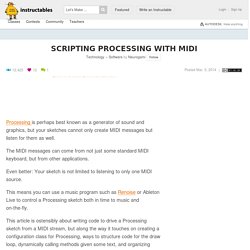 What's left is to add some final flourishes. The bulk of the graphics happens on a split screen. One more rendering structure that covered the entire screen would be nice. To this end, an new RenderArgs ArrayList instance is created. AngelCode.com - game development and more... BabylonJS - 3D engine based on WebGL/Web Audio and JavaScript. Download – ossia score. Ossia score is available for download on Github : v1 is stable, and won’t evolve much from now on: v2 is still in its alpha phase, and might encounter bugs or instabilities: Supported operating systems Windows 7, 8, 8.1, 10Mac OS X 10.11Most recent desktop Linux distributions Additional information The releases are 32-bit on Windows, and 64-bit on all the other operating systems. 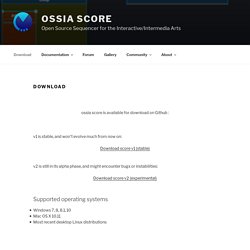 For Linux, the AppImage should work on : – CentOS >= 6.7 – Chromixium – Fedora – Kali – Ubuntu, Kubuntu, Xubuntu, etc… >= 12.04 – Debian >= Jessie – Suse >= 7.2 – ElementaryOS – Arch Linux. Cabbage Audio. Creative software can now configure itself for control, with OSC. Wouldn’t it be nice if, instead of manually assigning every knob and parameter, software was smart enough to configure itself? 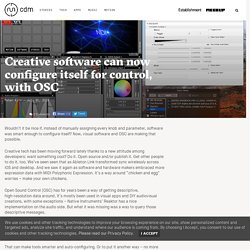 Now, visual software and OSC are making that possible. Creative tech has been moving forward lately thanks to a new attitude among developers: want something cool? Do it. Open source and/or publish it. Get other people to do it, too. Open Sound Control (OSC) has for years been a way of getting descriptive, high-resolution data around. What would that mean? That can make tools smarter and auto-configuring. OSC Queries are something I’ve heard people talk about for almost a decade now. Vidvox (makers of VDMX) have led the way, as they have with a number of open source ideas lately. Their implementation is already in a new build of VDMX, their live visuals / audiovisual media software: You can check out the proposal on their site: Plus there’s a whole dump of open source code. Here’s how it works in practice: Computational Arts - Home. Max / Gen and Juce Plug-in Export. Developing Max/MSP with JUCE. David Zicarelli Keynote, JUCE Summit 2015. Algorave. 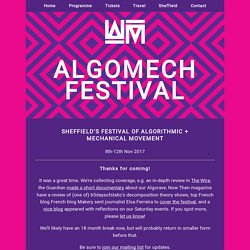 It was a great time. We're collecting coverage, e.g. an in-depth review in The Wire, the Guardian made a short documentary about our Algorave, Now Then magazine have a review of (one of) 65daysofstatic's decomposition theory shows, top French blog French blog Makery sent journalist Elsa Ferreira to cover the festival, and a nice blog appeared with reflections on our Saturday events. If you spot more, please let us know! We'll likely have an 18 month break now, but will probably return in smaller form before that. 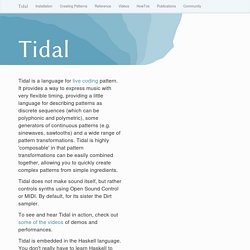 It provides a way to express music with very flexible timing, providing a little language for describing patterns as discrete sequences (which can be polyphonic and polymetric), some generators of continuous patterns (e.g. sinewaves, sawtooths) and a wide range of pattern transformations. Tidal is highly 'composable' in that pattern transformations can be easily combined together, allowing you to quickly create complex patterns from simple ingredients. Tidal does not make sound itself, but rather controls synths using Open Sound Control or MIDI. By default, for its sister the Dirt sampler. To see and hear Tidal in action, check out some of the videos of demos and performances. Tidal is embedded in the Haskell language. Get started! IanniX.