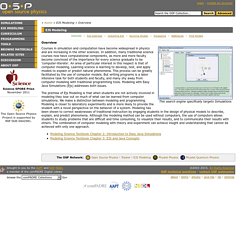 In addition, many traditional science courses now have computational components, as more and more faculty become convinced of the importance for every science graduate to be 'computer-literate'. An area of particular interest in this respect is that of computer modeling. Step. Step Description Step is an interactive physics simulator. It works like this: you place some bodies on the scene, add some forces such as gravity or springs, then click "Simulate" and Step shows you how your scene will evolve according to the laws of physics.

TCLspice is included and fully integrated into the ngspice source tree. All ngspice enhancements are accessible in tclspice as well. tclspice may be selected at compile-time, using the flag . /configure --with-tcl instead of --with-x, or --with-wingui. Ngspice then is made as a shared library (dll) ready for integration into tcl scripts. A graphics package using blt has been included. TCLspice is distributed with the core ngspice sources. Prior to year 2008 TCLspice was an independent project forked from ngspice. A crude copy and paste from TCLspice website: Home Planet Release 3.3a. Release 3.3a for Windows 95/98/Me and NT 4.0/2000/XP Release 3.3a of Home Planet, a comprehensive astronomy / space / satellite-tracking package for Microsoft Windows 95/98/Me and Windows NT 4.0/2000/XP and above, is now available; see details at the end on how to download and install the software. 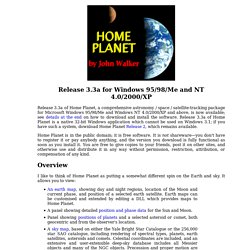 Release 3.3a of Home Planet is a native 32-bit Windows application which cannot be used on Windows 3.1; if you have such a system, download Home Planet Release 2, which remains available. Home Planet is in the public domain; it is free software. It is not shareware—you don't have to register it or pay anybody anything, and the version you download is fully functional as soon as you install it. You are free to give copies to your friends, post it on other sites, and otherwise use and distribute it in any way without permission, restriction, attribution, or compensation of any kind. Overview. Moontool for Windows. By John Walker March 16 MIM Moontool for Windows is a Microsoft Windows application which calculates the phase of the Moon at either the current time or at any user-specified time and displays a picture of the Moon at the correct phase, either as a system tray icon or in an open window. 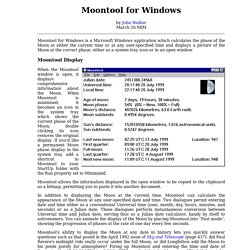 Moontool Display When the Moontool window is open, it displays comprehensive information about the Moon. When Moontool is minimised, it becomes an icon in the system tray which shows the current phase of the Moon; double clicking its icon restores the original display. Aciqra: A Virtual Sky Map. KStars. Description KStars is free, open source, cross-platform Astronomy Software.

It provides an accurate graphical simulation of the night sky, from any location on Earth, at any date and time. The display includes up to 100 million stars, 13,000 deep-sky objects,all 8 planets, the Sun and Moon, and thousands of comets, asteroids, supernovae, and satellites. Gpredict: Free, Real-Time Satellite Tracking and Orbit Prediction Software. Mars Simulation Project. Celestial Chart Generation. Orbit-Vis. StarPlot. En:start [Skychart] This program enables you to draw sky charts, making use of the data in many catalogs of stars and nebulae. 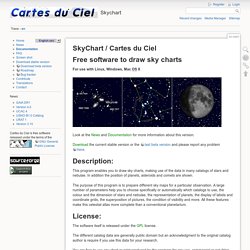 In addition the position of planets, asteroids and comets are shown. The purpose of this program is to prepare different sky maps for a particular observation. A large number of parameters help you to choose specifically or automatically which catalogs to use, the colour and the dimension of stars and nebulae, the representation of planets, the display of labels and coordinate grids, the superposition of pictures, the condition of visibility and more. All these features make this celestial atlas more complete than a conventional planetarium. The software itself is released under the GPL license. The different catalog data are generally public domain but an acknowledgment to the original catalog author is require if you use this data for your research.

[XSTAR] The XStar N-body Solver. XStar is a Unix program that simulates the movement of stars. 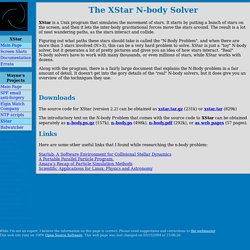 It starts by putting a bunch of stars on the screen, and then it lets the inter-body gravitational forces move the stars around. The result is a lot of neat wandering paths, as the stars interact and collide. Figuring out what paths these stars should take is called the "N-Body Problem", and when there are more than 3 stars involved (N>3), this can be a very hard problem to solve. Celestia: Home. Stellarium.