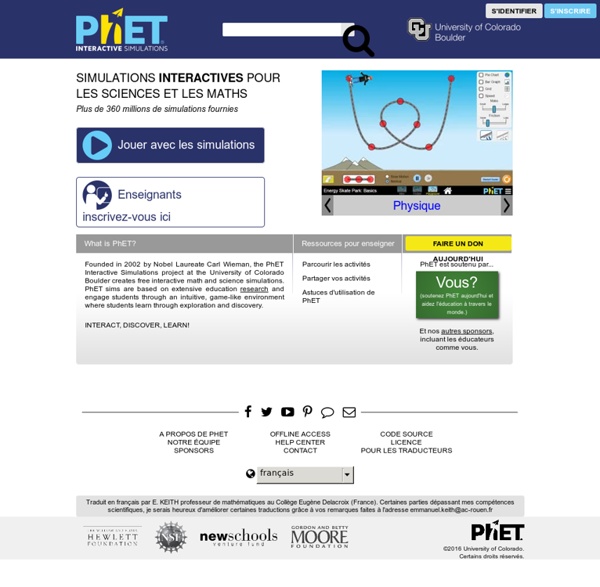 Physics Flash Animations We have been increasingly using Flash animations for illustrating Physics content. This page provides access to those animations which may be of general interest. The animations will appear in a separate window. Kalzium Kalzium Description Kalzium is an application which will show you some information about the periodic system of the elements. Therefore you could use it as an information database. Kalzium has already some nice features but there are still a lot of things to do. As Kalzium has been included in KDE 3.1 we are currently coding quite lot to bring in some new and nice features and make it as fast and usefull as possible. Magnifying the Universe Embed this infographic on your site! <iframe width="500" height="323" scrolling="no" src=" frameborder="0" allowfullscreen></iframe><br />Copyright 2012. <a href=" the Universe</a> by <a href=" Sleuth</a>. The above is an interactive infographic.

Grape Plasmas Listen Now Download as mp3 Part 1,2 from the show Fusion - The Power of the Sun What you Need What to do Take one or more grapes and almost cut them in half to leave a piece of skin between the two halves of the e grape. ghemical Introduction Ghemical is computational chemistry package, which is licensed under GNU GPL . The ghemical authors are listed here . Ghemical is implemented using the C++ programming language, and it has a graphical user interface which utilizes the OpenGL graphics interface and the GTK+ multiplatform widget library. ‪Gravity Force Lab: Basics‬ ‪Gravity Force Lab: Basics‬ is an interactive sim. It changes as you play with it. It has a Play Area and a Control Area. The Play Area has two mass spheres, a blue sphere labeled mass 1 and a red sphere labeled mass 2. A force arrow starts at the center of each sphere and points directly at the opposite sphere.

ninithi Lanka Software Foundation, a non-profit and research oriented organization in Sri Lanka initiated a project in 2009 to develop opensource software to be used in nanotechnology research work. The idea was welcome by Sri Lanka Institute of Nanotechnology and agreed to assist in the progress. The plan was to release a tool in 2010 and continue the progress in to a bigger project after the release. The inceptive project known as 'Ninithi' , was released on April,2010. It can be used to visualize and analyse widely used carbon allotropes in nanotechnology, Graphene, Carbon nanoribbons, Carbon nanotubes and Fullerenes. The software also provides 3-D views of the molecular structures of those molecules and graphs illustrating electrical properties of them.