Web Literacy Education for Educators - November Learning. 5 Innovative Mind-Mapping Tools For Education. What do you do when you have an elaborate project, assignment, or paper that needs to be quickly organized? 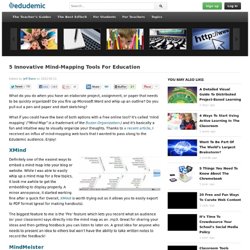 Do you fire up Microsoft Word and whip up an outline? Do you pull out a pen and paper and start sketching? What if you could have the best of both options with a free online tool? It’s called ‘mind mapping’ (“Mind Map” is a trademark of the Buzan Organization .) and it’s basically a fun and intuitive way to visually organize your thoughts. Thanks to a recent article , I received an influx of mind-mapping web tools that I wanted to pass along to the Edudemic audience. XMind Definitely one of the easiest ways to embed a mind map into your blog or website. The biggest feature to me is the ‘Pro’ feature which lets you record what an audience (or your classroom) says directly into the mind map as an .mp3.

MindMeister MindMeister is a powerful tool that is great for mind-mapping on the go. The killer tool is far and away the ability to collaborate, though. iMindMap SpiderScribe.net. The 2012 A-Z List Of Educational Twitter Hashtags. We got so many additions and updates to our 2011 list we thought it was time to bring you the most up-to-date list for 2012. So, without further ado, here’s the 2012 A-Z list of educational Twitter hashtags. We went through all the comments on the 2011 version , wrote down all the Twitter and Facebook updates, and compiled this list over the course of several months. What follows is our best effort to bring you the biggest and baddest list of hashtags.

I’m sure we still missed some as new hashtags seemingly pop up every day. In any case, let us know what we missed in the comments or on our Facebook page! First, some background to get you up to speed on what the heck a hashtag is. First, What’s A Hashtag? Whether you’re a new or seasoned Twitter user, you likely come across confusing hashtags that probably look like a bunch of nonsense. The # symbol, called a hashtag, is used to mark keyword or topic in a Tweet.

How To Hide Your Hashtag Chat From Followers Sources The Most Popular Hashtags. Twitter For Teachers: Erin Klein's Awesome 10-Minute Video Tells All. 8 Ways To Turn Students Into Storytellers 4.08K Views 0 Likes In the era of social media and always-on learning, it's hard to take a step back. So how do you effectively turn students into storytellers amid distraction? 5 Quick Visual Guides To Earth Day 2013 3.02K Views 0 Likes Want to teach about Earth Day or create an environmentally-friendly project for students? 10 Secrets To Staying Motivated 7.47K Views 0 Likes Whether you're studying, prepping a lecture, or just need to focus on something, you should know about some of these secrets to staying motivated. 100 Simple Ways To Effectively Use Twitter. Twitter is too big to ignore. You see hashtags in commercials, sponsored tweets, posts, news broken on Twitter, etc. It’s quickly become an indispensable tool for teachers, admins, parents, and students too.

Right now, there are still many (MANY) in education not using Twitter. They may think it’s tough to start using, difficult to monitor, and even a waste of time. But what if they had a categorized list of the top tips to help you use Twitter ? See Also: It’s Official: Using Twitter Makes Students More Engaged From how to follow people to asking for help to the best tools to use , it’s all here. Getting Connected With these tips and tools, you’ll be able to get connected with the people that matter most to you on Twitter. Follow experts : Get useful information from other experts in your field. Search Put Twitter’s massive amounts of information to work by using these search tips and tools. Twitority : This search engine offers results based on Twitter users with authority. Organization.