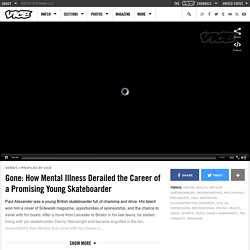 His talent won him a cover of Sidewalk magazine, opportunities of sponsorship, and the chance to travel with his board. After a move from Leicester to Bristol in his late teens, he started living with pro skateboarder Danny Wainwright and became engulfed in the fun, responsibility-free lifestyle that came with his chosen p... UI Prototyping Tool Made Beautiful - Create Interactive Wireframes & High Fidelity Prototypes. 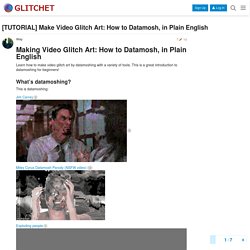 This is a great introduction to datamoshing for beginners! What’s datamoshing? Want To Talk To Fellow Poopers While You Go? There's An App For That. 5563 4ShareNew You're a good person, so you know not to talk to strangers in public restrooms while they do their business—especially if you can tell it's business of the No. 2 variety. 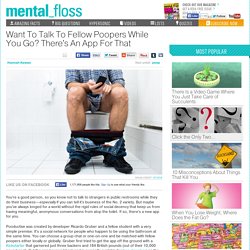 But maybe you've always longed for a world without the rigid rules of social decency that keep us from having meaningful, anonymous conversations from atop the toilet. Curation: The Next Big Thing? Animal shelter creates used 'cat' salesman ad to promote their assortment of 'pre-owned' cats. Dose. Pythagoras Cup (Greedy Cup) filled with Mercury. We Are All the Taiwanese Kid Who Punched a Hole in a $1.5 Million Painting. A 12-year-old boy in Taiwan has punched a hole in a $1.5 million painting, which on the surface level is one of the greatest flexes of all time. 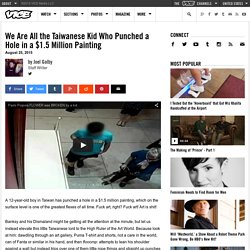 Fuck art, right? Fuck art! Art is shit! Banksy and his Dismaland might be getting all the attention at the minute, but let us instead elevate this little Taiwanese lord to the High Ruler of the Art World. Meet Shrek - The Renegade Sheep That Avoided Shearing For Six Years By Hiding In A Cave. August 20, 2015 This is Shrek, the appropriately-named renegade sheep that escaped and avoided shearing for SIX long years. modern farmer. 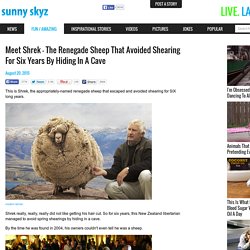 Are you SERIOUSLY 'Ready for Hillary'?! What Your Regrettable Scene Tattoo Says About You. You know those cool international stamps you get on your passport, the ones that prove you've been to a bunch of neat countries? 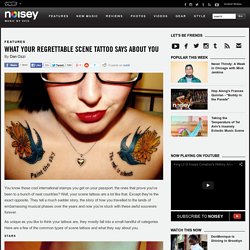 Well, your scene tattoos are a lot like that. Except they're the exact opposite. 40 Important Milestones You Can Have In Your Life Besides Getting Married. Marriage is an incredibly beautiful and special experience. 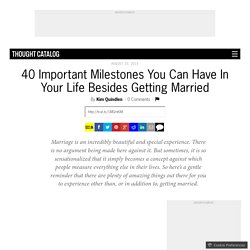 There is no argument being made here against it. But sometimes, it is so sensationalized that it simply becomes a concept against which people measure everything else in their lives. So here’s a gentle reminder that there are plenty of amazing things out there for you to experience other than, or in addition to, getting married. 1. Signing a lease for an apartment that’s completely yours – no parents, no siblings, no roommates, no boyfriend or girlfriend, just you. What Does It Feel Like to Kill Someone? It's generally thought that Western society is about as removed from death and dying as it's ever been, despite all the glorification of violence in the media. 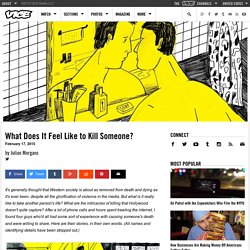 But what is it really like to take another person's life? What are the intricacies of killing that Hollywood doesn't quite capture? After a lot of phone calls and hours spent trawling the internet, I found four guys who'd all had some sort of experience with causing someone's death and were willing to share. Here are their stories, in their own words. (All names and identifying details have been stripped out.) Welcome to The Coldest Place Inhabited By Humans on Earth. Where is the coldest place on earth where humans actually live? 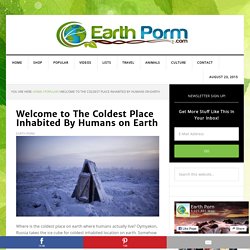 Oymyakon, Russia takes the ice cube for coldest inhabited location on earth. Somehow the people that call this small, rural town home are able to survive throughout some truly brutal winters. What are the best add-ons for Android Firefox. Art Assets – best practice guide. Scale & Units Set your system and project units for your software to work consistently with Unity e.g. 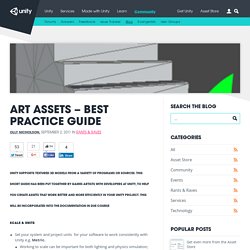 Metric. PhotoScan Guides and Tests. Create A Graph. WINDOWS93. Am I Collective's Portfolio. Trigger-Happy Cop Shot One of His Own and Kept Blasting Away. Much more could be done to end the horror stories in the Mediterranean, the Balkans, and along the Rio Grande but that requires more than emotions. Do not look closely at the photographs here. Do not look at them at all. 32 Legitimate Ways to Make Money at Home - The Penny Hoarder. Listen – we all know the internet is full of “make money at home” scams, so we’ve scoured through thousands of different ideas to find you 32 legitimate ones. These are all ideas that we’ve done before, so we know that they’re real and that you’ll get paid. Plus, I guarantee there are some in here that you’ve never heard of… 1. Give Your Opinion to Make $100+/Month Most of you know surveys aren’t our favorite way to make extra money, but we make an exception when we’re just vegging out on the couch.

It Costs $800 a Month to Live in a Box Inside a London Apartment. The shed is circled in case you cannot see the shed. Photo via Mercury Every week or so an advert for a London rental property appears that plumbs new depths of bad bastardry. Rent a bunkbed above a wardrobe, that sort of thing. Pay £1,500 a month [$2,300] to sleep in someone's shed. They got so difficult to comprehend that we decided to start cataloguing them. Collates the most creative and innovative visualisations of information. Chart Porn. Create and design your own graphs and charts online. Visual Literacy: An E-Learning Tutorial on Visualization for Communication, Engineering and Business. AS-MAP : Complexity Cartographer, Semantic cartography : Creator of ISO-MAP : 3D Isometric Resume of a Business Commando.

Code.compartmental. 6 Indispensable Free & Freemium SEO Tools. Bach in Lights: The Well-Tempered Clavier Graphically Visualized Through a Twisting Gallery of Light Bulbs. This exceedingly clever animation by artist Alan Warburton transforms two compositions from J.S. Bach’s The Well Tempered Clavier (Prelude and Fugue in C Major) into a visual interpretation of music. Warburton used a form of graphical notation manifested as thousands of fluorescent light bulbs mounted around a gallery space and parking garage. T-Mobile Will Now Punish Customers Who Abuse Unlimited Data. T-Mobile is today issuing a warning to customers: stop taking unlimited data to ridiculous extremes. In a post on T-Mobile’s blog, CEO John Legere has publicly called out “a fraction of a percent” of users who’ve been sucking down hundreds or even thousands of gigabytes of data each month.

But these customers aren’t using all of that data on their smartphones alone; instead, T-Mobile claims they’ve come up with ways to conceal mobile tethering and hotspot usage. Tethering allows customers to get other devices (PCs, tablets, etc.) online using their smartphone data plan. With its $80 unlimited data plan, T-Mobile already offers a generous 7GB limit for tethering purposes.

Once customers exceed that, their hotspot speeds are slowed down considerably. Lies You've Believed: Shampoo & Conditioner. Inside Abbey Road. Great Things About Being in Your Late Twenties. This Tattoo Artist's Surrealist Work Is So Beautiful It Belongs In A Museum. Dakota & Amy LaBounty wedding.

Man Buys 10.000 Undeveloped Negatives At a Local Auction And Discovers One of the Most Important Street Photographers of the Mid 20th Century - UpShout: Discover the Latest Internet Trends First and Share Them With Your Friends. Do It Before You Die: Hike to Havasu Falls — THISWORLDEXISTS. Watch Two 100-Year-Old BFFs Discuss Twerking, Selfies, Bieber and More. It took him 7 Years But He Finally Managed To Snap His Ultimate Dream Picture. Aziz Ansari Thinks Texting Has Ruined Dating. Film-Quality Stills Culled from Google Earth. My Secret Revealed. How I afford the travel life. - Live More Happy.