OpenBuilds V-Slot™ Corner Connectors by OpenBuilds. The concept behind the system is to simplify the building process while adding more flexibility to the V-Slot modular building system. 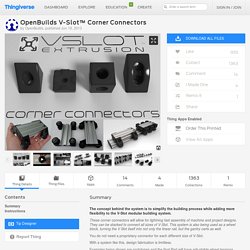 These corner connectors will allow for lightning fast assembly of machine and project designs. They can be stacked to connect all sizes of V-Slot. This system is also being used as a wheel block, turning the V Slot itself into not only the linear rail, but the gantry carts as well. You do not need a proprietary connector for each different size of V-Slot. 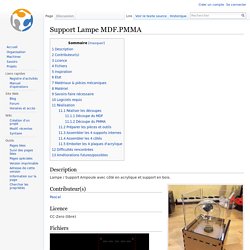 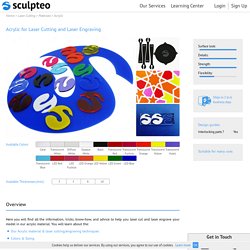 How to make interlocking acrylic designs – Ponoko Community Hub. The importance of radii We've written about using 'nodes' with 3D objects made from wood before, but suggested it may not work for acrylic because it is more brittle and less forgiving. 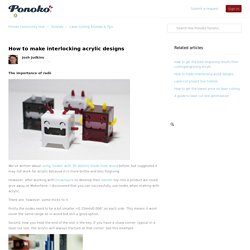 However, after working with Drownspire to develop their Vambit toy into a product we could give away at Makerfaire, I discovered that you can successfully use nodes when making with acrylic. There are, however, some tricks to it. Firstly the nodes need to be a bit smaller <0.15mm/0.006" on each side. This means it wont cover the same range as in wood but still a good option. Second, how you treat the end of the slot is the key. Effectively a sharp corner is creating a weak point in the acrylic. How to create snug fittings for your 3D products. MIT Medical Device Design. How to Build your Everything Really Really Fast. A few years ago, I wrote a short document on methods for rapidly fabricating elements of mechanical systems entitled How to Build Your Robot Really Really Fast. 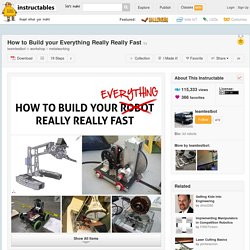 It was catered towards students in MIT's 2.007 introductory design and manufacturing class for which I was a lab assistant at the time. The basic premise of the document was ways to build the structure and framework of a robot quickly using the tools available in the class, such as basic 'garage' tools like drill presses, saws, and sanders, as well as rapid prototyping and digital fabrication tools like abrasive waterjet cutters and laser cutters, weighing the tradeoffs of 'build it now' versus 'design it now and have the machine make it later'.

At the time, it was a compilation of my own experiences with those tools up to that point, and so its scope was fairly limited. However, times have changed, and so have my experiences and views on the applicability of the methods presented in the document. Organization. How to salvage a DVD Drive For Free Parts - All. Have you ever wonder what is inside those optical drives that can be used ? 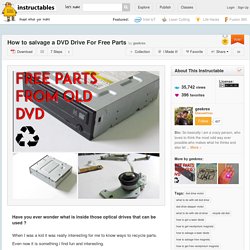 DIY & FabLab à Montpellier. Arduino. What is holographic, and what isn’t? Microsoft just announced HoloLens, which “brings high-definition holograms to life in your world.” 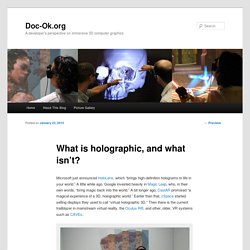 A little while ago, Google invested heavily in Magic Leap, who, in their own words, “bring magic back into the world.” A bit longer ago, CastAR promised “a magical experience of a 3D, holographic world.” Earlier than that, zSpace started selling displays they used to call “virtual holographic 3D.” Then there is the current trailblazer in mainstream virtual reality, the Oculus Rift, and other, older, VR systems such as CAVEs. Figure 1: A real person next to two “holograms,” in a CAVE holographic display. While these things are quite different from a technical point of view, from a user’s point of view, they have a large number of things in common. 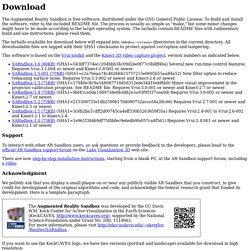 To build and install the software, refer to the included README file. The process is usually as simple as "make," but some minor changes might have to be made according to the target operating system. The tarballs contain README files with rudimentary build and use instructions; please read them. The tarballs available for download below will expand into SARndbox-<release> directories in the current directory. All downloadable files are tagged with their SHA1 checksums to protect against corruption and tampering. This software is based on the Vrui toolkit and the Kinect 3D video capture project, version numbers as indicated below. SARndbox-1.6 (80KB) (SHA1=543bf7374ecc204bbb34c09d2ee9f77c0b4ff40a) Several new run-time control features.