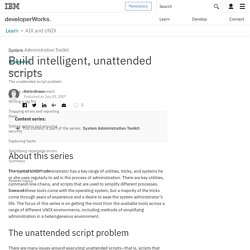 There are key utilities, command-line chains, and scripts that are used to simplify different processes. Some of these tools come with the operating system, but a majority of the tricks come through years of experience and a desire to ease the system administrator's life. Power Shell Usage: Bash Tips &amp; Tricks. Bash Tips & Tricks Simon Myers UKUUG Linux 2003 Conference • August 2003 This view lists all the slides from the talk in a continuous format. 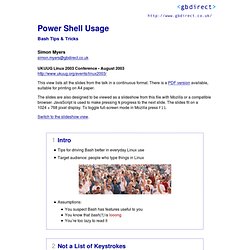 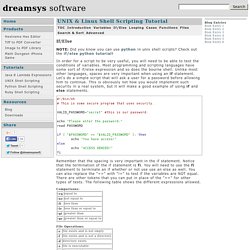 Check out the if/else python tutorial! In order for a script to be very useful, you will need to be able to test the conditions of variables. How to modify $PATH. Working with Arrays in Linux Shell Scripting – Part 8. We cannot imagine a programming language without the concept of arrays. 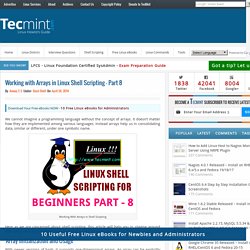 It doesn’t matter how they are implemented among various languages. Instead arrays help us in consolidating data, similar or different, under one symbolic name. Here as we are concerned about shell scripting, this article will help you in playing around with some shell scripts which make use of this concept of arrays. Array Initialization and Usage With newer versions of bash, it supports one-dimensional arrays. Bash - How to use double or single bracket, parentheses, curly braces. Working with 'Arrays' in BASH Scripting ~ Your Own Linux..! We have been dealing with some simple Bash Scripts in our recent articles on Basic Linux Shell Scripting Language. 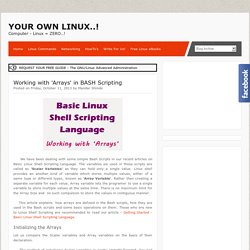 The variables we used in those scripts are called as 'Scalar Variables' as they can hold only a single value. Linux shell provides an another kind of variable which stores multiple values, either of a same type or different types, known as 'Array Variable'. Rather than creating a separate variable for each value, Array variable lets the programer to use a single variable to store multiple values at the same time. 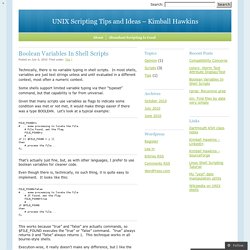 Filed under: Tips | Technically, there is no variable typing in shell scripts. In most shells, variables are just text strings unless and until evaluated in a different context, most often a numeric context. Returning Values from Bash Functions. Bash functions, unlike functions in most programming languages do not allow you to return a value to the caller. 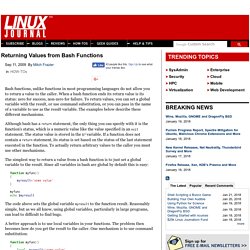 When a bash function ends its return value is its status: zero for success, non-zero for failure. To return values, you can set a global variable with the result, or use command substitution, or you can pass in the name of a variable to use as the result variable. The examples below describe these different mechanisms. Heiner's SHELLdorado. GUI scripting with Zenity. One advantage to using Linux is that there is a plethora of powerful commands available on the command-line; however, many users prefer not to use the CLI or are intimidated by it. 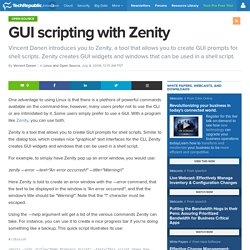 Some users simply prefer to use a GUI. With a program like Zenity, you can use both. Zenity is a tool that allows you to create GUI prompts for shell scripts. ActionScript. BASH Programming - Introduction HOW-TO: Variables. NextPreviousContents 5. 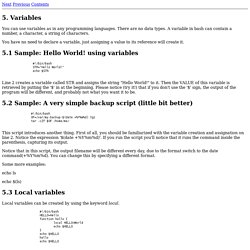 Variables You can use variables as in any programming languages. There are no data types. A variable in bash can contain a number, a character, a string of characters. BASH Programming - Introduction HOW-TO: Functions. NextPreviousContents 8. 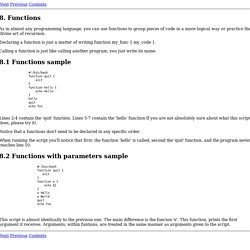 Functions As in almost any programming language, you can use functions to group pieces of code in a more logical way or practice the divine art of recursion. Declaring a function is just a matter of writing function my_func { my_code }. Bash - How to declare and use boolean variables in shell script? How do I parse command line arguments in bash?