Philosophy and Logic. STORY TELLING. Manufacturing the Illusion of Democracy – Chris Hedges. “We’ve bought into the idea that education is about training and “success,” defined monetarily, rather than learning to think critically and to challenge. 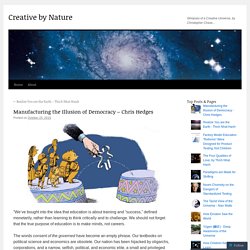 We should not forget that the true purpose of education is to make minds, not careers. The words consent of the governed have become an empty phrase. Our textbooks on political science and economics are obsolete. Our nation has been hijacked by oligarchs, corporations, and a narrow, selfish, political, and economic elite, a small and privileged group that governs, and often steals, on behalf of moneyed interests. This elite, in the name of patriotism and democracy, in the name of all the values that were once part of the American system and defined the Protestant work ethic, has systematically destroyed our manufacturing sector, looted the treasury, corrupted our democracy, and trashed the financial system.

FrazeIt in English - Write Good Sentences. History. Makerbook - The best free resources for creatives. Odyssey.js. New trends in Open Science. VUE. Exploratree - Exploratree by FutureLab. Literature and Latte - Scapple for Mac OS X and Windows. Rough It Out Scapple doesn’t force you to make connections, and it doesn’t expect you to start out with one central idea off of which everything else is branched. 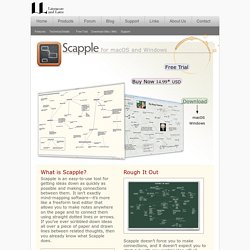 There’s no built-in hierarchy at all, in fact—in Scapple, every note is equal, so you can connect them however you like. The idea behind Scapple is simple: when you are roughing out ideas, you need complete freedom to experiment with how those ideas best fit together. It’s Scapple Simple Creating notes is as easy as double-clicking anywhere on the canvas and then typing; making connections between ideas is as painless as dragging and dropping one note onto another. What is Scapple? Scapple is an easy-to-use tool for getting ideas down as quickly as possible and making connections between them. Scapple’s nonlinear approach to the process of creative thinking is similar to what Gabriele Rico calls “clustering” in her popular book, Writing the Natural Way.

Literature and Latte - Scapple for Mac OS X and Windows. Presentation Ideas. Tools. Presentation Tools. The Harvard Classics: Download All 51 Volumes as Free eBooks. Every revolutionary age produces its own kind of nostalgia. 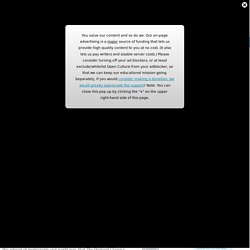 Faced with the enormous social and economic upheavals at the nineteenth century’s end, learned Victorians like Walter Pater, John Ruskin, and Matthew Arnold looked to High Church models and played the bishops of Western culture, with a monkish devotion to preserving and transmitting old texts and traditions and turning back to simpler ways of life. It was in 1909, the nadir of this milieu, before the advent of modernism and world war, that The Harvard Classics took shape. Compiled by Harvard’s president Charles W. Eliot and called at first Dr. Eliot’s Five Foot Shelf, the compendium of literature, philosophy, and the sciences, writes Adam Kirsch in Harvard Magazine, served as a “monument from a more humane and confident time” (or so its upper classes believed), and a “time capsule….

What does the massive collection preserve? Collier asked Eliot to “pick the titles” and they would publish them as a series. Related Content: W.H. Academia.edu. Google Scholar.