When Christ conquered Caesar. The women who came to tend the tomb in the garden had no doubt that their Lord was dead. 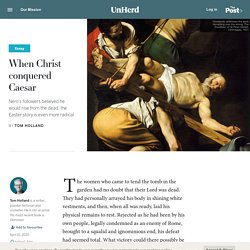 They had personally arrayed his body in shining white vestments, and then, when all was ready, laid his physical remains to rest. Rejected as he had been by his own people, legally condemned as an enemy of Rome, brought to a squalid and ignominious end, his defeat had seemed total. What victory could there possibly be in the wake of such a death? Yet then something miraculous happened. Spreading from east to west across the Mediterranean, travelling along the great network of roads and shipping lanes that constituted the arteries of the Roman Empire, news began to spread that this man whose mortal remains supposedly lay entombed in the grave had been seen alive. In the event, Nero did not come again. Plague and the comforts of history By Tom Holland His sex games were notorious.

Examine the views of Rudolf Bultmann on Jesus. The Resurrection of the Son of God by N. T. Wright. By N. 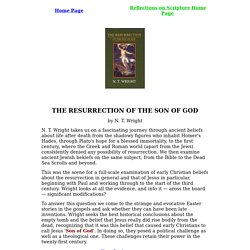 T. Wright N. T. Wright takes us on a fascinating journey through ancient beliefs about life after death from the shadowy figures who inhabit Homer's Hades, through Plato's hope for a blessed immortality, to the first century, where the Greek and Roman world (apart from the Jews) consistently denied any possibility of resurrection. AO1 and AO2 Resurrection. C1T1 Resurrection Overview. LP3 Bultmann. LP2 NTWright. 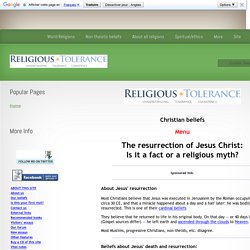 About Jesus' resurrection Most Christians believe that Jesus was executed in Jerusalem by the Roman occupying army circa 30 CE, and that a miracle happened about a day and a half later: he was bodily resurrected. This is one of their cardinal beliefs. They believe that he returned to life in his original body. Most Muslims, progressive Christians, non-theists, etc. disagree. Beliefs about Jesus' death and resurrection: Sponsored link: References used: The following information sources were used to prepare and update the above essay.

J.S. The Amazon.com bookstore lists the following books on "Resurrection:" Most, but not all, refer to Jesus' resurrection. Site navigation: Copyright © 1998 to 2015 by Ontario Consultants on Religious Tolerance Menu last updated: 2015-JAN-01 Written by. Sponsored link Christian beliefs Menu Sponsored link. About Jesus' resurrection They believe that he returned to life in his original body. Why Easter is so important to Christians. Sign Up for Our free email newsletters Today's Easter celebration marks the end of Holy Week, in which we Christians commemorate the crucifixion, death, and resurrection of Jesus Christ. 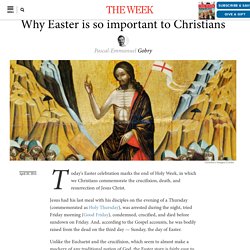 Jesus had his last meal with his disciples on the evening of a Thursday (commemorated as Holy Thursday), was arrested during the night, tried Friday morning (Good Friday), condemned, crucified, and died before sundown on Friday. The ‘literal flesh-and-blood’ resurrection is the heart of my faith. There has been a great deal of discussion about a provocative Easter Sunday column by Nicholas Kristof in The New York Times, in which he interviewed my friend, Serene Jones, the president of Union Theological Seminary and a distinguished professor of theology. 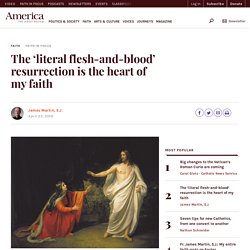 At the start of the interview, Mr. Kristof asks Professor Jones several questions about the resurrection. Is it necessary to believe in a “literal flesh-and-blood resurrection”? Accounting for the Empty Tomb: The quest for the risen, historical Jesus. Editor’s Note: William Lane Craig is an influential Christian thinker. 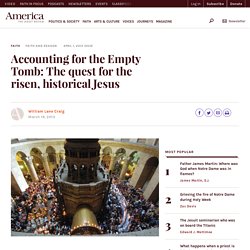 10 Reasons we know Christ rose from the dead. This Sunday is Easter Sunday, the day we celebrate the Resurrection of the Lord. 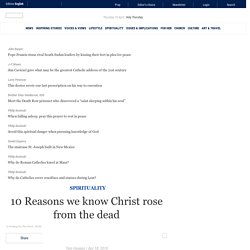 It’s important to understand what the Church claims. The Canadian psychologist Jordan Peterson, famous on YouTube, speaks of psychological and symbolic ways he appreciates the resurrection as a great freeing principle, but he says the question of the actual rising of Jesus from the dead is “murky and complicated.” He’s wrong. Richard Rohr incarnation and resurrection. Bultmann article. St. Paul and the Resurrection. Whether we think of the first century or the 21st century, the resurrection is both a central and a controversial part of Christian theology and experience. 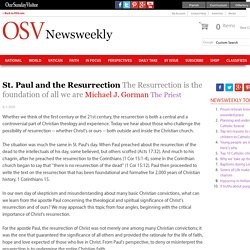 Today we hear about those who challenge the possibility of resurrection -- whether Christ's or ours -- both outside and inside the Christian church. The situation was much the same in St. Paul's day. Article: A Critique of Hick. Source A Critique of Hick by an evangelical pastor Hick shows some inconsistencies and ambiguities in his method. 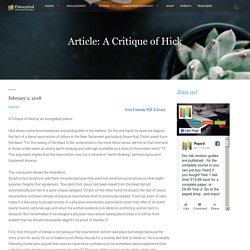 On the one hand, he does not dispute the fact of a literal resurrection of others in the New Testament particularly those that Christ raised from the dead. “For the raising of the dead to life, understood in the most literal sense, did not at that time and in those circles seem so utterly earth-shaking and well nigh incredible as it does to the modern mind.”19 This argument implies that the resurrection was not a miracle or “earth-shaking,” perhaps because it happened anyway. This conclusion denies the miracles in Scripture but Scripture calls them miracles because they were not common occurrences as Hick might assume. First, that the point of denial is not because the resurrection did not take place but simply because the story is too far away for us to believe is too flimsy excuse for a scholar like Hick to dwell on.

See the Site in Jerusalem That May Be Jesus’ Tomb.