Pope: Society is “civil” if it fights against a “culture of waste” Natural Law AO2 Essay Plans. Examine how one might apply Natural Law to the ethical dilemma of voluntary euthanasia. Euthanasia applying NL. Sex is for married heterosexual couples only, says Church of England. The Church of England has stated that sex belongs only within heterosexual marriage, and that Christians in gay or straight civil partnerships should be sexually abstinent.

Bishops have issued pastoral guidance in response to the recent introduction to mixed-sex civil partnerships, which says: “For Christians, marriage – that is, the lifelong union between a man and a woman, contracted with the making of vows – remains the proper context for sexual activity.” The church “seeks to uphold that standard” in its approach to civil partnerships, and “to affirm the value of committed, sexually abstinent friendships” within such partnerships. It adds: “Sexual relationships outside heterosexual marriage are regarded as falling short of God’s purpose for human beings.”

The natural law theory of ethics has existed in many forms. 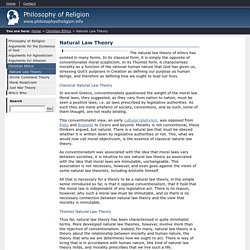 In its classical form, it is simply the opposite of conventionalist moral scepticism. In its Thomist form, it characterises morality as a function of the rational human nature that God has given us, stressing God’s purposes in Creation as defining our purpose as human beings, and therefore as defining how we ought to lead our lives. Classical Natural Law Theory In ancient Greece, conventionalists questioned the weight of the moral law. Moral laws, they suggested, as they vary from nation to nation, must be seen a positive laws, i.e. as laws prescribed by legislative authorities.

This conventionalist view, an early cultural relativism, was opposed from Plato and Aristotle to Cicero and beyond. As conventionalism was associated with the idea that moral laws vary between societies, it is intuitive to see natural law theory as associated with the idea that moral laws are immutable, unchangeable. Aquinas2 PrimSec. Thomas Aquinas, part 6: natural law. Thomas Aquinas's Aristotelian interpretation of natural law has shaped western law and politics, although it is a minor section in the Summa Theologiae (ST II.I.94). 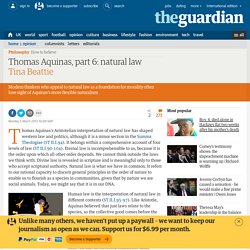 It belongs within a comprehensive account of four levels of law (ST II.I.90-104). Eternal law is incomprehensible to us, because it is the order upon which all other order depends. We cannot think outside the laws we think with. Aquinas: Moral Philosophy. The moral philosophy of St. 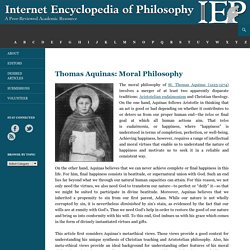 Thomas Aquinas (1225-1274) involves a merger of at least two apparently disparate traditions: Aristotelian eudaimonism and Christian theology. On the one hand, Aquinas follows Aristotle in thinking that an act is good or bad depending on whether it contributes to or deters us from our proper human end—the telos or final goal at which all human actions aim.

That telos is eudaimonia, or happiness, where “happiness” is understood in terms of completion, perfection, or well-being. Achieving happiness, however, requires a range of intellectual and moral virtues that enable us to understand the nature of happiness and motivate us to seek it in a reliable and consistent way. On the other hand, Aquinas believes that we can never achieve complete or final happiness in this life. This article first considers Aquinas’s metaethical views. Table of Contents 1. According to Augustine, “things that exist are good” (Confessions VII.12). 2. 3. A. ‘Amoris Laetitia’ is built on traditional Thomist morality, Pope says. 'In order to understand 'Amoris Laetitia,' you must read it from the beginning to the end' Seeing, understanding and engaging with people’s real lives does not “bastardise” theology, rather it is what is needed to guide people toward God, Pope Francis told Jesuits in Colombia. 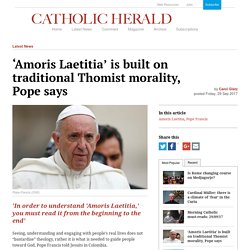 “The theology of Jesus was the most real thing of all; it began with reality and rose up to the Father,” he said during a private audience Sept. 10 in Cartagena, Colombia. Meeting privately with a group of Jesuits and laypeople associated with Jesuit-run institutions in Colombia, the pope told them, “I am here for you,” not to make a speech, but to hear their questions or comments. A Jesuit philosophy teacher asked what the pope hoped to see in philosophical and theological reflection today, not just in Colombia, but also in the Catholic Church in general. Philosophy, like theology, the pope said, cannot be done in “a laboratory,” but must be done “in life, in dialogue with reality.” “St. Virtue — Frederick Buechner. NEXT TO THE Seven Deadly Sins, the Seven Cardinal Virtues are apt to look pale and unenterprising, but appearances are notoriously untrustworthy. 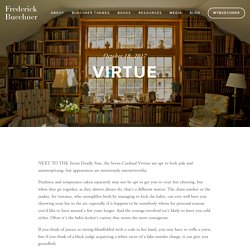 Prudence and temperance taken separately may not be apt to get you to your feet cheering, but when they go together, as they almost always do, that's a different matter. The chain smoker or the junkie, for instance, who exemplifies both by managing to kick the habit, can very well have you throwing your hat in the air, especially if it happens to be somebody whom for personal reasons you'd like to have around a few years longer. And the courage involved isn't likely to leave you cold either. Often it's the habit-kicker's variety that seems the most courageous. Weblinks and reading. Note: throughout the site further reading will be taken from a limited number of books (refer to the fuller bibliography for titles), so that the students can buy one or two additonal books and use them throughout the course. 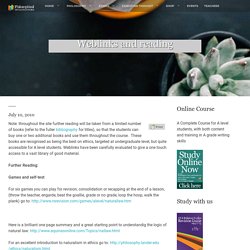 These books are recognised as being the best on ethics, targeted at undergraduate level, but quite accessible for A level students. Weblinks have been carefully evaluated to give a one touch access to a vast library of good material. Further Reading: Games and self-test For six games you can play for revision, consolidation or recapping at the end of a lesson, (throw the teacher, engarde, beat the goallie, grade or no grade, loop the hoop, walk the plank) go to: Natural Law - Philosophical Investigations. Natural Law – OCR Religious Studies A Level. Image: Sir James Thornhill, St. 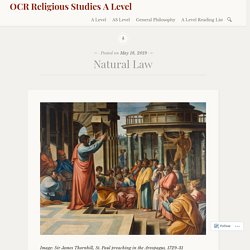 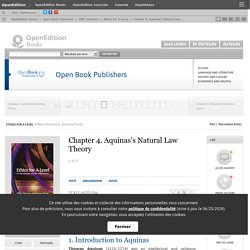 Aquinas, Romans, 2:15. They show that the requirements of the law are written on their hearts, their consciences also bearing witness, and their thoughts sometimes accusing them and at other times even defending them. 1 2 T. Applying Natural Law. BBC Two - Matters of Life and Death, What are the rights and wrongs of abortion? Natural Law and Abortion questions. Abortion answers. Ethics: Abortion. Abortion. A question of choice, or a question of life? 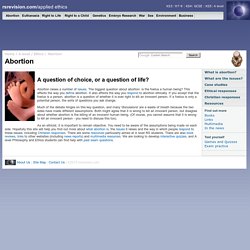 Abortion raises a number of issues. The biggest question about abortion: is the foetus a human being? This affects the way you define abortion. It also affects the way you respond to abortion ethically. If you accept that the foetus is a person, abortion is a question of whether it is ever right to kill an innocent person. Much of the debate hinges on this key question, and many 'discussions' are a waste of breath because the two sides have made different assumptions. Pro-choicers think the abortion debate is over. They’re out of touch with the public.

Pro-choice protesters mark out the number of women who have travelled from Northern Ireland to England for abortions (Getty) The 'no-platformers' are trying to silence a conversation which, as polling shows, is far from over Is it still possible to discuss moral issues like abortion in the modern British university, or are they simply “not up for debate”?

Ohio abortion law would require doctors to attempt impossible procedure of re-implanting ectopic pregnancies in uterus. Anti-abortion politicians in Ohio want doctors to attempt to re-implant ectopic pregnancies – a procedure derided by one doctor as “pure science fiction”. Members of the state’s Republican Party proposed a law this month that would force physicians to attempt an operation for which experts say technology does not currently exist. An ectopic pregnancy is one in which a fertilised egg implants somewhere other than a woman’s uterus, which in most cases ends up being inside a fallopian tube.

The situation can be fatal if left untreated. Download the new Indpendent Premium app Sharing the full story, not just the headlines Experts say re-implanting an ectopic pregnancy cannot currently be done. BBC Radio 4 - Woman's Hour, Abortion stories - today we hear from Amanda. Doctor sues US government for seizing abortion drugs she sent to patients. A Dutch doctor who has devoted her career to helping women safely terminate pregnancies in countries where it is illegal or difficult to access abortion has sued the US government for allegedly blocking her American patients from getting abortions by seizing their prescriptions. Dr Rebecca Gomperts, who prescribes abortion drugs to patients around the world, filed a lawsuit in federal court in Idaho on Monday.

The lawsuit asked a judge to stop the Food and Drug Administration (FDA) from taking any steps that would prevent her patients from accessing abortion-inducing drugs. Court lets man sue abortion clinic on behalf of aborted fetus. A court in Alabama is allowing a lawyer to represent an unborn foetus to sue an abortion in a first of its kind case in the US. As reported by Vice News, in February Ryan Magers sued the Alabama Women's Centre for Reproductive Alternatives in Madison County for giving his girlfriend an abortion two years ago.

Magers had reportedly pleaded with his girlfriend not to get an abortion, but she made the choice to go through with the procedure just six weeks after the child was conceived. Earlier this week, Magers' petition to have Madison County's probate court represent 'Baby Roe' was granted, which would allow him to sue to the clinic on behalf of the unborn foetus. Speaking to the local news outlet WAAY, Magers' attorney, Brent Helms, hailed the decision as a 'victory': We have already had a victory, and it was the first one of its kind, ever. It's time to change the abortion debate in America. For the last 40 years, the abortion debate, as currently framed, has raised huge sums of money for non-profits and political organizations, especially those on the right. Euthanasia - Philosophical Investigations. Euthanasia. Terry Pratchett: Choosing To Die. BBC Two - Class Clips, RE, Christian views on euthanasia or assisted dying.

Isaiah Haastrup: 'God should decide' when baby dies. Image copyright PA. Archbishop hits out at 'political aims' of some Alfie Evans campaigners. The Catholic archbishop of Westminster has suggested that some people who campaigned in the case of Alfie Evans, the child who died last week after a protracted legal battle over his treatment, “used the situation for political aims”. Belgium’s euthanasia nightmare. Death on demand: has euthanasia gone too far? Doctors at children’s hospital lay out plans for child euthanasia. Dutch doctor faces trial over ‘illegal’ euthanasia. Children-euthanasia-belgium-youngest-killed-terminally-ill. Two children, aged nine and 11, have become the youngest ever to be euthanised, according to a report.