A: Jesus - his birth

Christianity Birth Narratives Flashcards. What Does the Christian Tradition Mean by the Word “Mystery?” - Community in Mission. In the secular world, a “mystery” is something that baffles or eludes understanding, something that lies undisclosed. 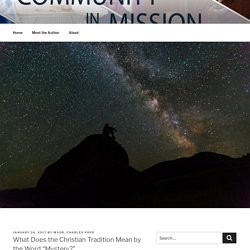 And the usual attitude of the world toward mystery is to solve it, get to the bottom of, or uncover it. Mysteries must be overcome! The riddle, or “who-done-it” must be solved! In the Christian and especially the Catholic world, “mystery” is something a bit different. Here, mystery refers to the fact that there are hidden dimensions in things, people, and situations that extend beyond their visible, physical dimensions. The Incarnation. The Nativity Stories Harmonized. Printed from Video version! 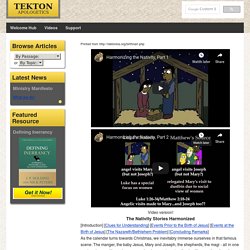 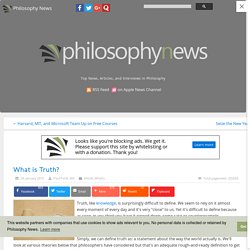 We seem to rely on it almost every moment of every day and it's very "close" to us. Yet it's difficult to define because as soon as you think you have it pinned down, some case or counterexample immediately shows deficiencies. Ironically, every definition of truth that philosophers have developed falls prey to the question, "Is it true? " Simply, we can define truth as: a statement about the way the world actually is. We'll look at various theories below that philosophers have considered but that's an adequate rough-and-ready definition to get us started. The Birth of Jesus in the Gospels. The Birth of Jesus: Comparing the Gospel Infancy Narratives by Felix Just, S.J., Ph.D. 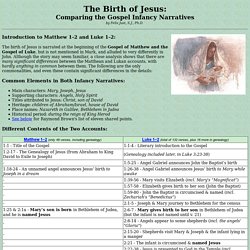 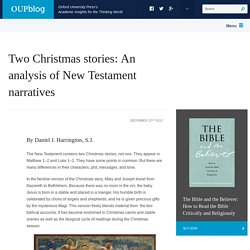 Harrington, S.J. The New Testament contains two Christmas stories, not one. They appear in Matthew 1–2 and Luke 1–2. They have some points in common. But there are many differences in their characters, plot, messages, and tone. SAMs Harmonisation and Incarnation questions. LP1 InfancyNarrativesTexts. ClassNotes InfancyNarratives. A Level Theme 1A Redaction Criticism by phallen (from TES Resources) Infancy narratives - Oxford Biblical Studies Online. 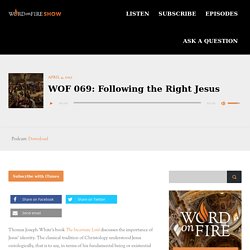 The classical tradition of Christology understood Jesus ontologically, that is to say, in terms of his fundamental being or existential identity; whereas modern and contemporary Christology tends to understand Jesus psychologically or relationally. The transition from an ontological Christology to a consciousness Christology has conduced toward all manner of relativism, subjectivism, indifferentism, and the attenuation of evangelical zeal. In this episode, Bishop Robert Barron unpacks these theological concepts and explains their consequences in familiar terms. The Word Became Flesh. The Incarnation in the Biblical Infancy Narratives grid. 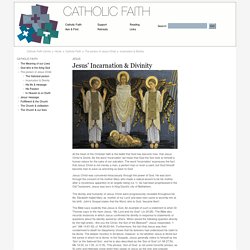 By the word ‘Incarnation’ we mean that God the Son took to himself a human nature for the sake of our salvation. The word ‘Incarnation’ expresses the fact that Jesus Christ is not merely a man, a perfect man or even a saint, but God himself become man to save us and bring us back to God. Jesus human and divine Richard Rohr. Mapping the Incarnation: How the Christian Narrative Makes Sense of our World – Opinion – ABC Religion & Ethics. Alister McGrath is Andreas Idreos Professor of Science and Religion at the University of Oxford. 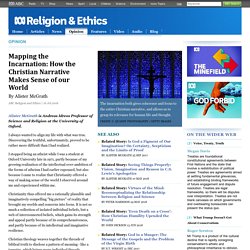 I always wanted to align my life with what was true. Discovering the truthful, unfortunately, proved to be rather more difficult than I had realized. I stopped being an atheist while I was a student at Oxford University late in 1971, partly because of my growing realization of the intellectual over-ambition of the forms of atheism I had earlier espoused, but also because I came to realize that Christianity offered a way of making sense of the world I observed around me and experienced within me.

Christianity thus offered me a rationally plausible and imaginatively compelling "big picture" of reality that brought my worlds and concerns into focus. It is not so much a collection of isolated individual beliefs, but a web of interconnected beliefs, which gains its strength and appeal partly because of its comprehensiveness, and partly because of its intellectual and imaginative resilience. Incarnation eduqas. Kenosis. Help support New Advent and get the full contents of this website as an instant download. 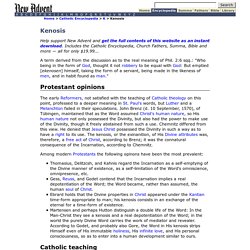 Includes the Catholic Encyclopedia, Church Fathers, Summa, Bible and more — all for only $19.99... St Cassian and the four senses. How should learners be taught to find sense in biblical text? 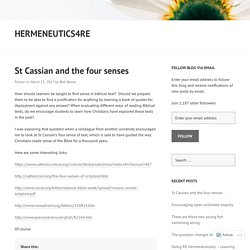 Should we prepare them to be able to find a justification for anything by learning a bank of quotes for deployment against any answer? When evaluating different ways of reading Biblical texts, do we encourage students to learn how Christians have explored those texts in the past? I was exploring that question when a colleague from another university encouraged me to look at St Cassian’s four sense of text, which is said to have guided the way Christians made sense of the Bible for a thousand years. Here are some interesting links: Of course Like this: Like Loading... The Incarnation. Help support New Advent and get the full contents of this website as an instant download. Includes the Catholic Encyclopedia, Church Fathers, Summa, Bible and more — all for only $19.99... I. ARC- Aquinas Resources & Conferencing : Incarnation.

Christmas can provide a perfect opportunity to revisit the story of the Nativity. It’s also a great opportunity to look at the scripture linked to the Incarnation.Andy Lewis wrote an article in 2014 about different ways to teach the Nativity story. Read it <here>and <here> You can download his lesson PowerPoint <here> Read a guest blog post entitled “The Greatest Story Ever Told?” Survey: Perceptions of Jesus English Adults.