2A Can God suffer?

BBC Radio 4 - Sunday, The Bones of Saint Eanswythe; Christ Church College Dispute; Coronavirus and the Vatican. C1T2abc. Can God suffer. What was crucifixion like? Can God Suffer? The Crucified God. The Scandal of the Cross. Posted by Ravi Zacharias on March 14, 2013 There is a striking verse in the New Testament, in which the apostle Paul refers to the cross of Jesus Christ as foolishness to the Greek and a stumbling block to the Jew. 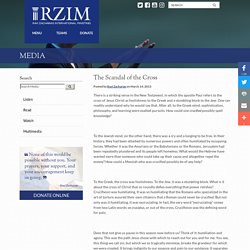 One can readily understand why he would say that. After all, to the Greek mind, sophistication, philosophy, and learning were exalted pursuits. How could one crucified possibly spell knowledge? To the Jewish mind, on the other hand, there was a cry and a longing to be free. To the Greek, the cross was foolishness. Does that not give us pause in this season now before us?

You will then discover that it is sin that is foolishness. I don’t believe in the God that Stephen Fry doesn’t believe in either. Someone once told me that, when he was a young man, Stephen Fry thought about becoming a priest. 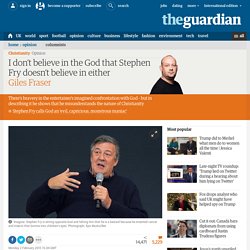 Now I don’t know if this is true, but it wouldn’t surprise me one bit. Because the way he expressed himself in a recent interview – calling God an “evil, capricious, monstrous maniac” – was almost biblical in its theological intensity. And though I think there is a whopper of a mistaken assumption at the heart of his answer, I nonetheless think it was an admirable one. Why? Because what Fry was asked was what he would say to God if he met him face to face. What greater example of speaking truth to power could there be than this? Too many religious people actually worship power. The Impassibility of God. By Prof. 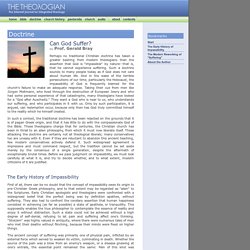 Gerald Bray Perhaps no traditional Christian doctrine has taken a greater bashing from modern theologians than the assertion that God is "impassible" by nature--that is, that he cannot experience suffering. Such a doctrine sounds to many people today as if God does not care about human life. And in the wake of the terrible persecutions of our time, particularly the Holocaust, the impassibility of God is frequently blamed for the church's failure to make an adequate response.

Taking their cue from men like Jürgen Moltmann, who lived through the destruction of European Jewry and who had some personal experience of that catastrophe, many theologians have looked for a "God after Auschwitz. " How does the suffering God give us hope? - The Moltmanniac. This week I’ve been expanding on how Moltmann’s book The Crucified God calls us to rethink everything in light of the revelation of God we see in the cross of Christ. 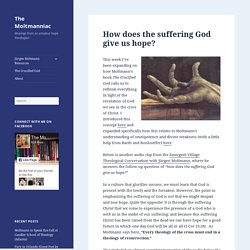 I introduced this concept here and expanded specifically how this relates to Moltmann’s understanding of omnipotence and divine weakness (with a little help from Barth and Bonhoeffer) here. Below is another audio clip from the Emergent Village Theological Conversation with Jürgen Moltmann, where he answers the follow up question of “how does the suffering God give us hope?” Does God Suffer? by Thomas Weinandy, O.F.M. Cap. Some readers may think this an odd article to be published by “a journal of religion and public life.” 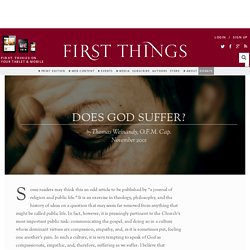 It is an exercise in theology, philosophy, and the history of ideas on a question that may seem far removed from anything that might be called public life. In fact, however, it is pressingly pertinent to the Church’s most important public task: communicating the gospel, and doing so in a culture whose dominant virtues are compassion, empathy, and, as it is sometimes put, feeling one another’s pain.

In such a culture, it is very tempting to speak of God as compassionate, empathic, and, therefore, suffering as we suffer. I believe that temptation should be resisted. Understanding why it should calls for a careful examination of relevant considerations in theology, philosophy, and the history of ideas. Schmemann on Death and the Afterlife. Now we understand why God desires that death, why the Father gives His Only-Begotten Son to it. 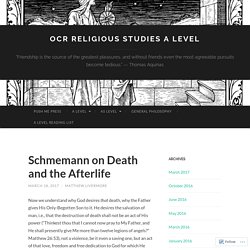 He desires the salvation of man, i.e., that the destruction of death shall not be an act of His power (“Thinkest thou that I cannot now pray to My Father, and He shall presently give Me more than twelve legions of angels?” Matthew 26:53), not a violence, be it even a saving one, but an act of that love, freedom and free dedication to God for which He created man.