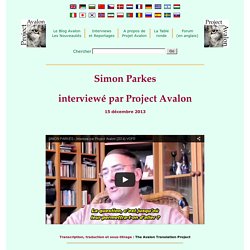 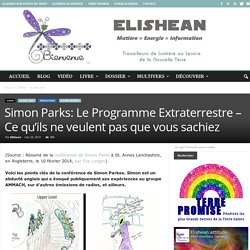 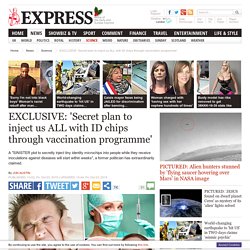 Yesterday, Express.co.uk exclusively revealed Mr Parkes, who stood down as a Whitby Town Councillor in April after claiming his mother was an alien, had claimed to have stopped scientists at the Large Hadron Collider (LCH) in Geneva from opening a portal to another dimension that would have destroyed mankind.

The conspiracy theorist claims an evil elite group called the Illuminati secretly control the world and were behind the LCH plot. However, Mr Parkes claims we was able to stop the portal from opening by getting hundreds of people to meditate across the globe at the same time, so the evil group has had to come up with a plan B - chipping the entire human race so they can be monitored,controlled and even punished. Politicien britannique: Poutine est soutenu par des extraterrestres. 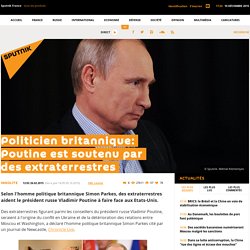 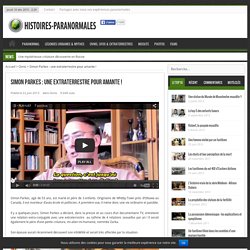 Originaire de Whitby Town près d’Ottawa au Canada, il est moniteur d’auto-école et politicien. A première vue, il mène donc une vie ordinaire et paisible. Labour Councillor Simon Parkes On Being Brought Up By Aliens. When Labour councillor Simon Parkes, of Whitby Town Council, made headlines last year it certainly had people talking after he detailed about his strange encounters, including having ‘sex’ with an other-worldly entity and even having an alien upbringing. 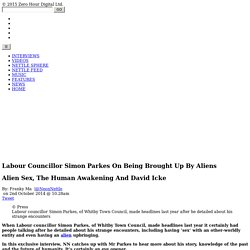 In this exclusive interview, NN catches up with Mr Parkes to hear more about his story, knowledge of the past and the future of humanity. It’s certainly an eye opener. NN: Where would you say your story begins? SP: It’ll begin before this life time. If people can understand that your life on the planet isn’t your first or only time, in my case I’ve been here before, reincarnated – something that Western religions or Western society finds very hard to understand. NN: And how far do you remember back? SP: Well in this lifetime, I actually have a sort of photographic memory which is quite handy; probably my earliest memory would be about the age of three months, something like that, sort of three-month-old baby. 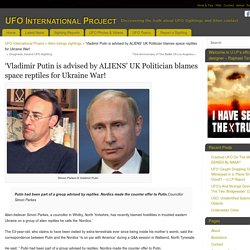 Nordics made the counter offer to Putin.Councillor Simon Parkes Alien-believer Simon Parkes, a councillor in Whitby, North Yorkshire, has recently blamed hostilities in troubled eastern Ukraine on a group of alien reptiles he calls the ‘Nordics.’ The 53-year-old, who claims to have been visited by extra-terrestrials ever since being inside his mother’s womb, said the correspondence between Putin and the Nordics “is on par with America” during a Q&A session in Wallsend, North Tyneside. He said: ” Putin had been part of a group advised by reptiles. Nordics made the counter offer to Putin. “The technology the Nordics are giving to Putin is on par with America.” Speaking to an audience of around 30 listeners at The Vault, the father-of-three continued: “The Nordics have told Putin he no longer has to toe the American line, hence his resistance.”

U.I.P Summary. ‘I Stopped Illuminati Plan To Use CERN’s Large Hadron Collider To Destroy The World,’ Says Former U.K. Politician Simon Parkes. Simon Parkes, a former U.K. town councilor, has made the astounding claim that he thwarted a sinister plan by the evil Illuminati to use CERN’s Large Hadron Collider (LHC) to destroy all life on Earth and possibly in the universe. 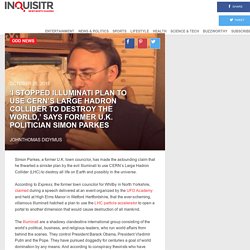 According to Express, the former town councilor for Whitby in North Yorkshire, claimed during a speech delivered at an event organized by the UFO Academy and held at High Elms Manor in Watford Hertfordshire, that the ever-scheming, villainous Illuminati hatched a plan to use the LHC particle accelerator to open a portal to another dimension that would cause destruction of all mankind. The Illuminati are a shadowy clandestine international group consisting of the world’s political, business, and religious leaders, who run world affairs from behind the scenes.

They control President Barack Obama, President Vladimir Putin and the Pope. They have pursued doggedly for centuries a goal of world domination by any means. <img src=" Simon Parkes, 53, has stepped down from Whitby Town Council. Opponents of Simon Parkes accused the 53-year-old of turning Whitby Town Council in North Yorks into a laughing stock with his outlandish beliefs and conspiracy theories about Government cover-ups, UFOs, non-humans and the IIluminati. 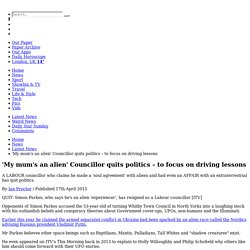 Earlier this year he claimed the armed separatist conflict in Ukraine had been sparked by an alien race called the Nordics advising Russian president Vladimir Putin. Mr Parkes believes other space beings such as Reptilians, Mantis, Palladians, Tall Whites and "shadow creatures" exist. He even appeared on ITV's This Morning back in 2013 to explain to Holly Willoughby and Philip Schofield why others like him should come forward with their UFO stories. On Channel 4 documentary Confessions Of An Alien Abductee the same year he said his real mother was a 9ft alien with eight fingers.

He said he fathered an extraterrestrial lovechild called Zarka and added that making love with an alien up to four times a year has put a strain on his marriage to his human wife.