Credo Mutwa & the Alien Agenda: UFOs & Alien Abduction in the Eyes of a Zulu Shaman. By LOUIS PROUD— The Zulu sangoma (a shaman or healer) and high sanusi (clairvoyant and lore-master) Vusamazulu Credo Mutwa is recognised by many as one of the most distinguished African traditional healers around today. 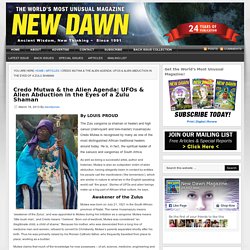 He is, in fact, the spiritual leader of the sanusis and sangomas of South Africa. As well as being a successful artist, author and historian, Mutwa is also an outspoken victim of alien abduction, having allegedly been in contact by entities his people call the mantindane (‘the tormentors’), which are similar in nature to what we in the English speaking world call ‘the grays’. Stories of UFOs and alien beings make up a big part of African tribal culture, he says. The Torture of Credo Mutwa and The Theft of The Necklace of Mysteries.

23 August 2010 from ProjectAvalon Website After spending the last two weeks very productively in the US, I am now in South Africa with David Icke, visiting Credo Mutwa, the great Zulu shaman, healer, and keeper of African tradition. 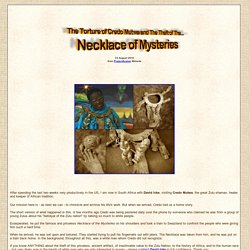 Our mission here is - as best we can - to chronicle and archive his life's work. But when we arrived, Credo told us a horror story. The short version of what happened is this. Exasperated, he put the famous and priceless Necklace of the Mysteries on his shoulders and took a train to Swaziland to confront the people who were giving him such a hard time. When he arrived, he was set upon and tortured. If you know ANYTHING about the theft of this priceless, ancient artifact, of inestimable value to the Zulu Nation, to the history of Africa, and to the human race - but very likely now in the hands of white men who are only interested in money - please contact David Icke in full confidence. Reptilian Revelations Out of Africa. By Uri Dowbenko November 10, 2012 from NewDawnMagazine Website Spanish version. 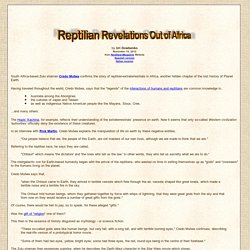 Great Zulu Shaman and Elder Credo Mutwa - On Alien Abduction & Reptilians - A Rare, Astonishing Conversation. It has often been said that the Native Elders of any given tribe hold the keys to knowledge. 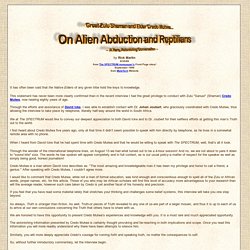 This statement has never been more clearly confirmed than in the recent interview I had the great privilege to conduct with Zulu "Sanusi" (Shaman) Credo Mutwa, now nearing eighty years of age. Through the efforts and assistance of David Icke, I was able to establish contact with Dr. Johan Joubert, who graciously coordinated with Credo Mutwa, thus allowing the interview to take place by telephone, literally half-way around the world in South Africa. We at The SPECTRUM would like to convey our deepest appreciation to both David Icke and to Dr. Joubert for their selfless efforts at getting this man’s Truth out to the world.

Credo Mutwa reveals AIDS Treatment. The following is a transcription of a conversation between Credo Mutwa and Steve, who is helping him to communicate his information through this website. 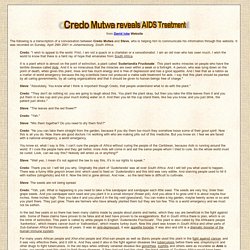 It was recorded on Sunday, April 29th 2001 in Johannesburg, South Africa. Credo: "I wish to appeal to the world. First, I am not a quack or a charlatan or a sensationalist. I am an old man who has seen much. Credo Mutwa in Plea to Save Africa from Illuminati Genocide. RICK MARTIN: The weekend of April 28 you may have noticed that all the major prostituted print and broadcast media outlets announced yet another AIDS conference of "goodwill" had just ended in Africa. 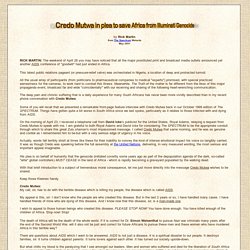 This latest public relations pageant (or pressure-relief valve) was orchestrated in Nigeria, a location of deep and protracted turmoil.All the usual array of participants (from politicians to pharmaceutical companies to medical "experts") promised, with special practiced earnestness for the cameras, to work hard to combat this illness. Meanwhile, The Truth of the matter is far different from the likes of this major propaganda event, broadcast far and wide "coincidentally" with our receiving and sharing of the following heart-wrenching communication. The deep pain and chronic suffering that is a daily experience for many South Africans has never been more vividly described than in my recent phone conversation with Credo Mutwa. [Editor’s note: See Dr.

Credo Mutwa - Biography. From CredoMutwa Website Contents Part 1: Introduction I was born in Zululand on the 21st July 1921 according to my father. 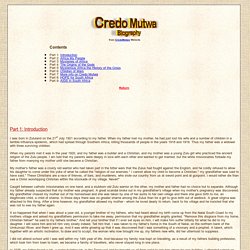 When my father met my mother, he had just lost his wife and a number of children in a terrible influenza epidemic, which had spread through Southern Africa, killing thousands of people in the years 1918 and 1919. Thus my father was a widower with three surviving children. When my parents met it was in the year 1920, and my father was a builder and a Christian, and my mother was a young Zulu girl who practiced the ancient religion of the Zulu people. My mother’s father was a crusty old warrior who had taken part in the bitter wars that the Zulus had fought against the English, and he coldly refused to allow his daughter to come under the yoke of what he called the "religion of our enemies.

" Caught between catholic missionaries on one hand, and a stubborn old Zulu warrior on the other, my mother and father had no choice but to separate. Back to Contents Back to Contents. Credo Mutwa and Ancient Crop Circles of Africa. By Andreas Muller 31 August 2013 from Earth-Heal Website "The world in which we live is more miraculous than we know. 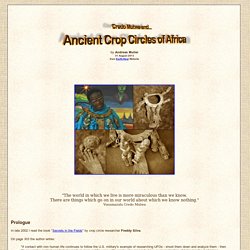 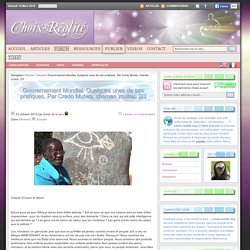 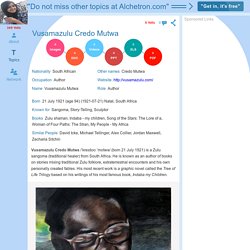 He is known as an author of books on stories mixing traditional Zulu folklore, extraterrestrial encounters and his own personally created fables. His most recent work is a graphic novel called the Tree of Life Trilogy based on his writings of his most famous book, Indaba my Children. Credo calls himself a sanusi (common spelling isanuse) which is a type of Zulu diviner or sangoma. The term stems from a more historic time and is not widely used today, even in a traditional setting. Credo currently lives with his wife, Virginia, in Kuruman where they run a hospice clinic. His father was a widower with three surviving children when he met his mother. He was subsequently raised by his father's brother and was taken to the South Coast of Natal (present day KwaZulu-Natal), near the northern bank of the Mkomazi River.

Credo Mutwa Painting/Figurines. Dr Vusamazulu Credo Mutwa, the great Zulu Shaman and who is the highest living Sanusi (oldest form of traditional healer and uplifter), Sangoma (healer), and the spiritual leader of all Sanusis, n’yangas (diviners or priests) and Sangomas throughout the sub-continent. Dr Mutwa is the keeper of the world’s history according to African Folklore.

About Credo Mutwa Official Website. This website is the UNOFFICIAL website for Vusamazulu Credo Mutwa. Please take your time to read through this website, especially the biography section which is very detailed, and published in baba Credo’s own words. We established this website in 2004 without anyone’s permission. Donations made via this website went directly to his own Paypal account we helped to set-up in 2010 in Plettenberg Bay. Credo Mutwa's Treasures. Credo Mutwa's TreasuresBy R. D. Flavin. Linda Smith Inspiration. The book of Genesis chapter six in the Bible reveals that in the mists of antiquity the sons of the gods came down to Earth and bred with the daughters of Man.

Basically Adam and Eve’s offspring were imposed upon by aliens, and here I am tossing in the possibility that perhaps they were a race of reptilian beings from another planet who were sexually compatible with human women. We have the Reptilian portion in the back of our brain – the R complex which explains why we tend to have repetitive behaviour. Reptilian beings are parasitic of nature. They also love pomp and ceremony, being lauded over and worshipped. Vusamazulu Credo Mutwa. Un article de Wikipédia, l'encyclopédie libre. Vusamazulu Credo Mutwa est un des derniers chamans du peuple zoulou .