Example 11.4 – Simple Agent to Agent Interaction. The last few examples with agents were looking at fixed steering points to influence the agent’s behavior. 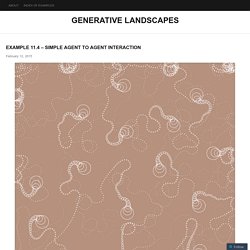 In this example, the agents themselves can influence the behavior of others. We will start with some very simple behaviors, and in future examples we will add a few more behaviors and play around with them. Bear in mind though, even changing the parameters of one simple behavior without completely rewriting the code can have a big effect on the resulting form. Digital Fabrication in Architecture Group. Folded Shell Structure by Liane Ee Making Sheet Architecture Folding turns flat sheet into doubly curved shell Folding adds structural stiffness to a surface and can be a potential construction system for large span structures with complex geometry. 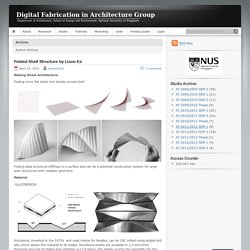 Material Alucobond, invented in the 1970s and used mainly for facades, can be CNC milled using angled drill bits, which allows the material to be folded. Space Symmetry Structure. New technologies get really interesting once we move beyond just recreating and incrementally improving what was possible with previous methods, and start exploring the qualitatively new things they enable . 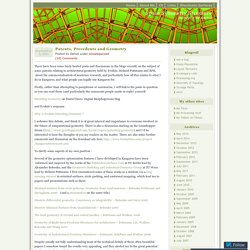 The initial impetus for Kangaro­o was to embed in the digital modelling environment the kind of form-finding methods previously explored through real physical models – hanging chains, stretched fabrics and so on. While this simulation of real physical material properties is still something I will be developing (and there is still much more work to be done here), the direction I find most exciting at the moment, and what I want to talk about today, is digital material behaviour which does not directly simulate anything from the real world, yet is nonetheless highly relevant to the design of buildable structures.

When we form-find and design through physical model making, we interact with the behaviour of the material. I believe the term ‘freeform’ is often rather a misnomer. Introduction to Grasshopper. This workshop introduces participants to Grasshopper, a node-based algorithmic editor that functions as a plug-in within the Rhinoceros environment. 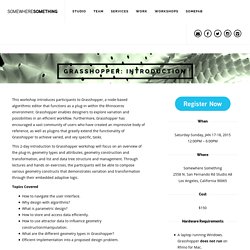 Grasshopper enables designers to explore variation and possibilities in an efficient workflow. Furthermore, Grasshopper has encouraged a vast community of users who have created an impressive body of reference, as well as plugins that greatly extend the functionality of Grasshopper to achieve varied, and vey specific, tasks. Daniel Piker. February 2, 2010 § Mind boggling animations by Daniel Piker. 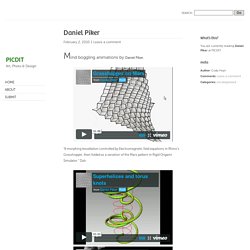 “A morphing tessellation controlled by Electromagnetic field equations in Rhino’s Grasshopper, then folded as a variation of the Mars pattern in Rigid Origami Simulator.” Duh. See more of Daniels projects on his Blog, Flickr, and Vimeo. … kinds of ways … » Grasshopper. Grasshopper At times, (especially when producing animations) it may be useful to link several controlling variables to a single slider. 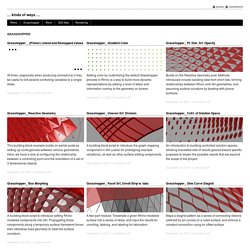 Adding color by customizing the default Grasshopper preview in Rhino is a way to build more dynamic representations by adding a level of detail and information overlay to the geometry on screen. Builds on the Reactive Geometry post. Grasshopper: Attractors. Attractor. This was the initial example of image processing at our Parametric Modeling class. 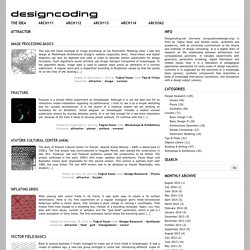 JellyFish for Rhino. Video: JellyFish is a new tool that works with Grasshopper and Rhino to enable various ways of modeling with attractive and repulsive forces. 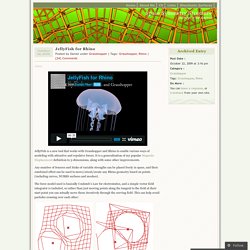 It is a generalisation of my popular Magnetic Displacement definition to 3-dimensions, along with some other improvements. Any number of Sources and Sinks of variable strengths can be placed freely in space, and their combined effect can be used to move/orient/create any Rhino geometry based on points (including curves, NURBS surfaces and meshes).

The force model used is basically Coulomb’s Law for electrostatics, and a simple vector field integrator is included, so rather than just moving points along the tangent to the field at their start point you can actually move them iteratively through the curving field. Mesh+Surface Deformation Tools. Surface Deformation! Mode Lab. [FORMul[a]RCH] Geometrydepth.com. Pattern Redux. Hexagonal paneling oriented by 1-column excel. 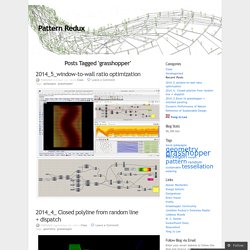 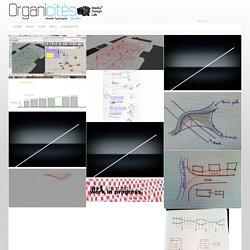 Looking for Threads/ Wooly paths definition. Custom vortex. Grasshopper. This component implements a mixed approach to creating curves of constant width for regular polygons of odd segment count. This series of components access the sun system in Rhino and allow for control and returning of sun parameters. These two components allow for two means of list organization. Shear List takes a list of data and creates two lists, one with the last item removed and a second with the first item removed creating a staggered pair of lists making value comparisons simple. Pair takes a list and creates a datatree with pairs of sequential values from the list. Returns the character from an integer index value, 1=A, 2=B, etc. This collection of preset value list components contain the RGB values for the RAL color scheme. Mode Lab. Grasshopper. For designers who are exploring new shapes using generative algorithms, Grasshopper is a graphical algorithm editor tightly integrated with Rhino’s 3-D modeling tools.

Unlike RhinoScript, Grasshopper requires no knowledge of programming or scripting, but still allows designers to build form generators from the simple to the awe-inspiring. Algorithmic Modelling with Grasshopper by Mohamad Khabazi by Pablo C. Herrera. Computational Design Italy. Architecture +Design + Computation. Interwoven landscape. The concept this test is to create a flow of data that cross the laptop. Architecture,... Shrink Wrap with Grasshopper and Kangaroo.