Prince Charles just turned 72 — here are the best photos from every year of his royal career so far. 1974: Charles made his maiden speech in the House of Lords this year, becoming the first royal to do so since his great-great-grandfather Edward VII in 1884. 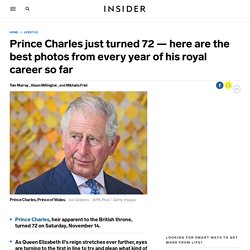 "The personality of Prince Charles, who has generally been regarded as rather shy, has been gradually emerging," The New York Times wrote after his speech. AP Photo Source: The New York Times. 1976: Prince Charles took command of his first ship, the coastal minehunter HMS Bronington. It was also his last year of active military service and the year he started The Prince's Trust — a charity to help vulnerable young people get their lives on track, which today has over 1,100 staff and around 9,000 volunteers and secondees. Source: The Prince's Trust. 1997: Princess Diana is killed in a car crash in Paris. AP Photo / John Gaps III. □□ Wishing The Prince of Wales a very happy birthday today! #HappyBirthdayHRH. 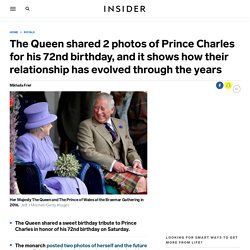 The monarch posted two photos of herself and the future king on Twitter — a formal photo taken shortly after his birth, and another of the pair laughing together at the Braemar Gathering in 2016.The photos show how the mother and son's relationship has evolved over the years. Her Majesty was reported to have a strained relationship with Charles throughout his childhood, and he was mainly looked after by nursery staff.The later photo of the pair laughing could be seen as a reflection of their close relationship today.This year, Charles publicly celebrated his relationship with his mother with a Mother's Day post on social media.Visit Insider's homepage for more stories. Prince Charles just turned 72 — here are the best photos from every year of his royal career so far. 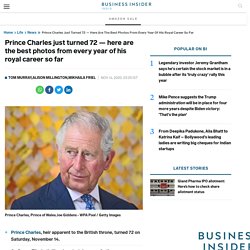 <span itemprop="caption">1971: Having become the first heir to the throne to graduate with a university degree (a 2:2 from Trinity College Cambridge), the prince flew himself to RAF Cranwell in Lincolnshire to train as a jet pilot. Charles at 72: a year in the life of the birthday prince – Royal Central. Photo: Charlie Proctor / Royal Central The Prince of Wales celebrates his 72nd birthday on November 14th 2020 and will look back on an eventful year which has seen change in his family and a challenge to alter the Royal Family in a moment unprecedented in its recent history. 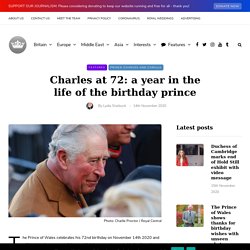 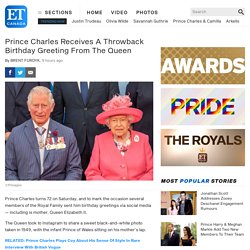 The Queen took to Instagram to share a sweet black-and-white photo taken in 1949, with the infant Prince of Wales sitting on his mother’s lap. Instagram. Instagram. Instagram. Clarence House on Instagram: “Thank you for all the well wishes on The Prince of Wales’s 72nd Birthday! Kate Middleton Celebrates The End Of ‘Powerful’ Hold Still Community Exhibition. By Jamie Samhan. 4 hours ago Kate Middleton is marking the end of the highly successful Hold Still community exhibition. 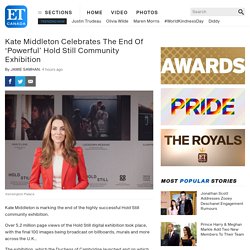 Over 5.2 million page views of the Hold Still digital exhibition took place, with the final 100 images being broadcast on billboards, murals and more across the U.K.. The exhibition, which the Duchess of Cambridge launched and on which she also served as a judge, had more than 31,000 photography submissions that focused on such pandemic-related themes as Helpers and Heroes, Your New Normal and Acts of Kindness. RELATED: Kate Middleton Marks Remembrance Day With Special Video Call, Comforts 11-Year-Old Boy Who Lost His Father In Afghanistan In a video message, Kate thanked everyone who submitted images, adding, “It has been fantastic to see these portraits on billboards and outdoor poster sites across the country as part of our community exhibition, and I’m hugely grateful to all our partners for helping us take the images back to the people and communities who took them.”

14 Unlikely Royal Friendships That Will Surprise You. American musician Will.i.am, who’s also a judge on The Voice UK, has gotten tight with the York branch of the royal family. 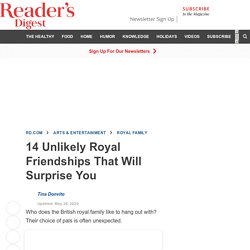 He first teamed up with Prince Andrew on a music charity, Inspired Digital Enterprise Award (iDEA), which helps young people developing digital businesses. The Prince told CNBC he met the rapper through his ex-wife, Sarah Ferguson. The connection is even funnier because Will.i.am’s Black Eyed Peas bandmate, Fergie, whose real name is Stacy Ferguson, took her nickname from the royal Fergie—and even named her solo album The Dutchess.

Of his first meeting with Sarah, Will.i.am says, “She was like, ‘Hello, Will.i.am, I don’t know if you know me but I am the original Fergie.'” Recently, when Black Eyed Peas’ Fergie couldn’t make their upcoming reunion tour, he joked to The Sun, “I was gonna call Princess Beatrice and take her mom’s offer up—we’re going to bring the Duchess in. Kate Middleton Marks Remembrance Day With Special Video Call, Comforts 11-Year-Old Boy Who Lost His Father In Afghanistan. By Becca Longmire. 11 Nov 2020 8:56 AM Kate Middleton and Prince William marked Remembrance Day with some special video calls. 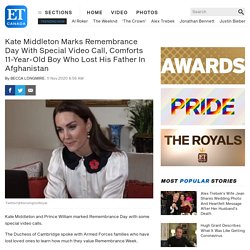 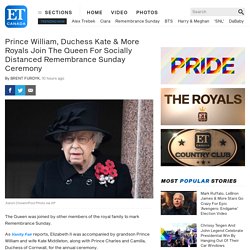 As Vanity Fair reports, Elizabeth II was accompanied by grandson Prince William and wife Kate Middleton, along with Prince Charles and Camilla, Duchess of Cornwall, for the annual ceremony. With the U.K. in lockdown due to a second wave of COVID-19, this year’s Remembrance Sunday ceremony was not attended by members of the public. RELATED: Queen Elizabeth Marks Remembrance Sunday With Small, Private Ceremony William, attired in a military uniform, laid a wreath at Whitehall, where just 26 veterans were in attendance. His father, Prince Charles, also laid a wreath, as did Prince Edward and Princess Anne; Prince Andrew, who stepped away from all royal duties in the wake of the Jeffrey Epstein scandal, did not attend. 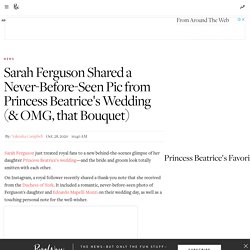 On Instagram, a royal follower recently shared a thank-you note that she received from the Duchess of York. It included a romantic, never-before-seen photo of Ferguson's daughter and Edoardo Mapelli Mozzi on their wedding day, as well as a touching personal note for the well-wisher. In the black-and-white pic, the bride and groom look so in love as they gaze into each other's eyes and hold hands. Beatrice is also seen holding her gorgeous bouquet, which features an arrangement of pale pink and cream sweet peas, jasmine, royal porcelain ivory spray roses and pink o’hara garden roses.

The personal note reads, "Thank you so much for your amazingly caring and supportive messages for Beatrice and Edo's future happiness. Mail (38) Prince Charles ‘Sad’ He Hasn’t Seen Prince Harry And Meghan Markle’s Son Archie In A Year. By Jamie Samhan. 1 Nov 2020 7:57 PM Prince Harry and Meghan Markle have been living outside the United Kingdom for nearly a year now. Late November 2019, the couple headed to Vancouver Island with son Archie for Christmas.

After departing their working royal roles, the family moved down to Los Angeles in March. The couple have returned to London twice near the start of 2020 but both times left Archie in Canada. Prince Charles Plays Coy About His Sense Of Style In Rare Interview With British Vogue. By Aynslee Darmon. 11 hours ago Prince Charles is opening up about his sense of style. In a rare interview with British Vogue, the Prince Of Wales played coy about being dubbed a fashion icon. “I thought I was like a stopped clock – I’m right twice every 24 hours.

But… I’m very glad you think it has style,” he says. Spanish court takes over new investigation of ex-king. MADRID — Spanish Supreme Court prosecutors have taken over a new investigation into the financial activities of ex-King Juan Carlos, who recently left Spain to live in an unspecified country following the opening of probes against him in Spain and Switzerland. © Provided by The Canadian Press The State Prosecutor's office Tuesday confirmed the court had taken charge of a new investigation after Spanish online daily elDiario.es reported that anti-corruption prosecutors were probing the alleged use by the former king, ex-Queen Sofia and some family members of credit cards linked to foreign accounts not in their names. Spanish government spokeswoman María Jesús Montero declined to comment on the case, but said the government hoped it would be clarified as soon as possible. The prosecutor's office gave no details of the probe, but private news agency Europa Press said prosecutors confirmed it concerned the case mentioned by elDiario.es.

Princess Diana’s Brother Wants BBC To Launch Inquiry Into Infamous 1995 Panorama Interview. By Corey Atad. 3 Nov 2020 11:19 AM Charles Spencer wants justice for his sister Princess Diana. In a letter to the director-general of the BBC, Spencer accused the network of “sheer dishonesty” in its bid to secure a now-infamous Martin Bashir interview with Diana in 1995. RELATED: New Princess Diana Documentary Set For Theatrical Release In 2022 The late royal’s brother called on the BBC to launch an inquiry over doctored bank statements, which he says helped get Diana’s participation in the Panorama interview. Recently, the BBC has apologized for the statements but said that Diana herself had never seen them anyway.

“They had played no part in her decision to take part in the interview,” the network said. New Princess Diana Documentary Set for 2022 Theatrical Release. There are few cultural figures that have captured the public’s imagination more than the late Diana, Princess of Wales. The universally beloved royal died in 1997, yet our fascination with the ups and downs of her short life – and high-profile falling out with the Royal Family – continues to garner headlines across international publications. Even sons, princes William and Harry, can’t escape her shadow, facing constant reminders via a barrage of news outlets that continue to harken back their mother’s tragic demise and tabloid-famous split from Prince Charles. Now, U.K. The search for the first winners of Prince William's Earthshot Prize has begun. 5 Things Prince George Will Inherit. Here's How Much the British Royal Family is Worth.

Whether you admire them for their established birthrights or myriad of leadership qualities, the esteemed British family is revered throughout countless nations. Royals seem to have it all—power, prestige, and perhaps most importantly, money. This is Why Prince William and Kate Middleton Never Show PDA. When it comes to beloved couples, Prince William and Kate Middleton are in a league of their own.