The Funniest Canadian Jokes of All Time. Who is the most hilarious of them all? 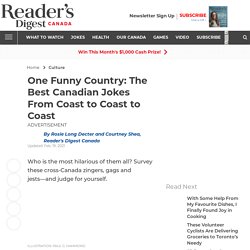 Survey these cross-Canada zingers, gags and jests—and judge for yourself. Illustration: Paul G. Hammond Yukon Prospecting for gold and guffaws I’m so sorry if you’re single in March in the Yukon. Ghost in the North On October 30 last year in Whitehorse, residents were disturbed by a spooky noise ringing throughout town. New Northerners We all want to be part of the Yukon. Frisbee for One A popular summer activity in the Yukon is disc golf, or Frisbee golf. Learn about Keno City, the weirdest place in the Yukon! British Columbia Welcome to the playful Pacific. These smiling animals will brighten your day. These smiling animals will brighten your day Microsoft and partners may be compensated if you purchase something through recommended links in this article. 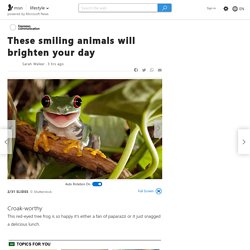 Croak-worthy Early riser What a hoot Winky, wonky donkeys. Earth - The 17 most ridiculous things on Earth. The monkey with the enormous hooter Proboscis monkeys are aptly-named. 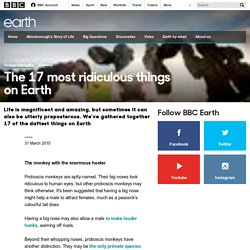 Their big noses look ridiculous to human eyes, but other proboscis monkeys may think otherwise. Look closely, bird's breath is visible in the frigid Calgary air. Can a banana become a hammer when it's this cold out? Woman Installs A Doorbell Camera And Keeps Getting Trolled By Her Cat. When Norma Maikovich installed a new doorbell camera last weekend, she thought it would give her peace of mind. 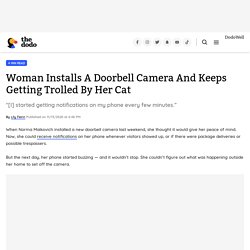 Now, she could receive notifications on her phone whenever visitors showed up, or if there were package deliveries or possible trespassers. But the next day, her phone started buzzing — and it wouldn’t stop. She couldn’t figure out what was happening outside her home to set off the camera. Turns out, she didn’t have to worry. Category: Animals - Give It Love. Dogs & Puppies videos. Bear in truck is too busy to care about humans.

35 weird things you only see in your grandma's kitchen. Guy Modifies The Ceiling Of His Shop So His Cats Can Keep An Eye On Him. Plenty of stores have security cameras, but one shop in New Taipei City, Taiwan, is taking a slightly different approach — by employing some watchful cats. 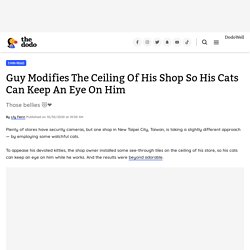 To appease his devoted kitties, the shop owner installed some see-through tiles on the ceiling of his store, so his cats can keep an eye on him while he works. And the results were beyond adorable. Twitter user SCMcrocodile posted photos of the store, where his friend sells stamps and local specialties, and they quickly went viral. “My friend modified the attic of his shop to accommodate his cats. Now he is under constant observation,” SCMcrocodile wrote on Twitter.

According to Yahoo News, the idea came about after the cats found a way to get between the first and second floor, and customers could hear them playing through the ceiling. (53) Funniest Animals □ - Awesome Funny Animals' Life Videos □ - Cutest Animals Ever. Golden Retriever puppy fights off "evil" ice cube. 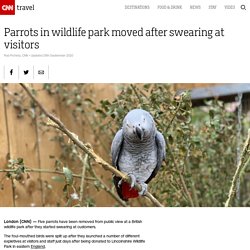 The foul-mouthed birds were split up after they launched a number of different expletives at visitors and staff just days after being donated to Lincolnshire Wildlife Park in eastern England. Untitled. Percy was adopted from the RSPCA just under a year ago, and his family has fallen absolutely in love with him. 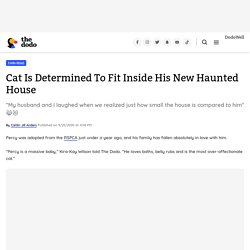 “Percy is a massive baby,” Kira-Kay Wilson told The Dodo. “He loves baths, belly rubs and is the most over-affectionate cat.” Every time Wilson goes out shopping, she likes to come home with a gift for Percy. His favorite kind of gift is definitely anything he can sit in. Feisty felines show dogs who's REALLY boss in hilarious photos. Untitled. Untitled. Hungry goat headbutts Georgia deputy after invading her car. Funny Animal Pictures That You Need In Your Life. 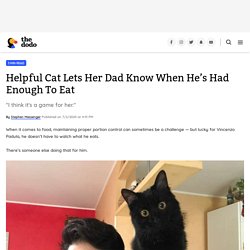 There’s someone else doing that for him. Untitled. Untitled. Untitled. Untitled. The Feeling After The Global Pandemic Ends GIF. Give that snoot a BOOP!□ □: mr.bestbuddy (IG) #snootaboop. This is Lotta□ Lotta loves to play fetch □□□ Home / Twitter. Here's a @WorldsFunniest clip of the day! Be sure to tune in Friday on FOX! Listen to the sound this cat makes every time it gets pet. (120) ANIMALS that will MAKE YOU LAUGH EXTREMELY HARD - Funny RACCOONS SQUIRRELS and ANIMALS compilation. To catch a squirrel, you must become the squirrel. Stop doing that! Hurry pleaaaaaaaaase #animalscare #nature #ifb #animalsrights #animals #SaturdayMotivation. Puppet is not amused with being put on naughty step□□□□ Engineer builds ‘revenge’ obstacle course for seed-stealing squirrels. Bored during coronavirus quarantine? 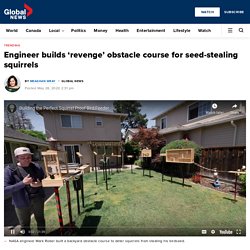 Here’s your next project to fight off pesky squirrels. To keep himself entertained, former NASA and Apple engineer Mark Rober built a genius obstacle course to deter his backyard squirrels from stealing his birdseed — or, at least, make them work for it. For weeks, Rober watched as his neighbourhood squirrels — which he named Rick, Marty, Frank and Phat Gus — attempted to navigate the course, making their way through his labyrinth to reach the bird feeder. Story continues below advertisement Rober has been sharing his progress over YouTube, where users can follow along as he collects supplies and builds the course, fit with rope bridges, a fake bikini-clad squirrel, jumps and even a photo opportunity to throw the animals off. “This course is extremely challenging,” he says in the video. 1:46 Aw Nuts!

Small as they are, the furry animals quickly adapted to the different challenges, with some of them nearly making it to the coveted collection of seeds. Squirrelly story lifting spirits amidst COVID-19 outbreak. SIMCOE, ONT. -- Some local squirrels, literally working for peanuts, have become a social media sensation. 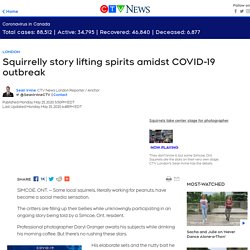 The critters are filling up their bellies while unknowingly participating in an ongoing story being told by a Simcoe, Ont. resident. Professional photographer Daryl Granger awaits his subjects while drinking his morning coffee. But there’s no rushing these stars. RoseLe Studio - We managed to sift through some... Denali or Mr. Bubbles? Keeper Susan caught our grizzly boy in some deep bear bubble business. Have you ever seen a more adorable bubbler? □□□ (You have not.) #tuesdaymood. Does this have #K9Kato all over it @DeputyDuvall? Also I forgives @LeighTerry7722 would find this funny. □□ Baby twins can't stop laughing and it's totally contagious. Mutual grooming session between doggy and owner will crack you up. Gigi’s begging technique was too aggressive. So big sister @K9Mascot Blue stepped in for some guidance.

We Could All Use This Video Of Panda Enjoying A Bath. Video Affectionate nurse shark follows scuba diver like a lost puppy Nito, known in the scuba diving world as "Big Sexy" was swimming on the reef in his home in Belize. San Pedro is one of the most beautiful islands in the Caribbean and it has some of the most abundant and beautiful life, above and below the waves.

I always feel like somebody’s watchin meeee... Video courtesy of K9_grimm TT. I’m on the edge of my seat! : Image. Funny Cat Video Compilation 2017. Turtle tries to bait giant manatee into a fight. This playful dog truly thinks he's one of the horses. Message in a bottle: Neighbours in isolation stay connected via carrier-cat. Like a lonely castaway on an island far at sea, Sam Cramer is waiting for her next message in a bottle to arrive. But Cramer's messages don't arrive on the crashing waves. Instead, they're delivered by her pet cat Bella. During the lonely days of isolation, Cramer has been exchanging notes with her neighbours every day via feline messenger. "I truly am getting messages in a bottle," Cramer said. "I'm checking the mail every day. Guy Discovers Just What His Cat Is Up To While He's Sleeping. Brad Pitt riffs on Trump’s disinfectant remarks in SNL’s second at-home episode. Saturday Night Live‘s second at-home episode featured Brad Pitt playing Dr.

Anthony Fauci, a member of the White House coronavirus task force and the U.S. government’s top infectious disease expert. “There’s been a lot of misinformation out there about the virus,” Pitt says while in character as Fauci. “And yes, the president has taken some liberties with our guidelines. So tonight I would like to explain what the president was trying to say.” 50 Funny Animal Pictures - Cute Photos of Wild Animals. (20) Home / Twitter. C Dot A.K.A Dottie □ on Instagram: “□□□□” 16 Animals Who Want To Get Behind The Camera. #9 Is Ridiculously Cute.

Funny Cat Video Compilation 2017. In A Bid To Keep His Cat Off The Counter, This Guy Used Tin Foil... Mission Accomplished. Cat Opens Tupperware Full Of Cookies And Takes A Bite Of Every Single One. On her quest for snacks, Nellie often gets herself stuck or into places she’s not supposed to be — and even when her parents think that something is safe from her antics, Nellie is always quick to prove them wrong. Riebel is a veterinary student, and recently she decided to bake some cookies for her fellow volunteers at the Wildlife Medical Clinic through the University of Illinois. She put some of the cookies in a sealed Tupperware container, figuring they’d be safe in there — but unfortunately, they weren’t safe at all. “Nellie somehow opened the container and took all the cookies out and onto the floor,” Riebel said. “The funny thing is I know she took them all out separately because if she had just knocked them out of the container, the cookies would have broken. Mail (1080)

Facebook. French Bulldog totally loses it after getting a brand new pool. (26) Baby and Cat Fun and Fails - Funny Baby Video. Elephant carefully clambers over 5ft wall in attempt to steal mangoes. Watch - Discover. Best Viral Videos Of 2019. Gangster Cats. (93) Jennifer Anderson Lepko. Cat Funny Reaction. 15 Cats That Are Too Pure For This World. Toby The Golden Retriever Takes A Dip In The Muddiest Pond Ever And Won't Get Out. Man And Cat Locked In Tense Battle Over Who Runs The Household. □□□