What the new UN report warning of climate impacts means for Canadians. The United Nations Intergovernmental Panel on Climate Change (IPCC) once again issued a dire report warning that without a radical reduction of our greenhouse gas emissions, we are on a course for global warming that will have grave consequences. 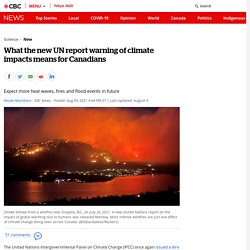 Monday's report, which examined several scenarios including one of low carbon emissions and one of high carbon emissions, or a business-as-usual approach, said the planet has already warmed almost 1.2 C. The IPCC is calling on world governments to reduce CO2 emissions to limit that warming to 1.5 C, though it appears we may hit that threshold within the next two decades unless drastic reductions are made. We are already seeing the effects of climate change across Canada, including more intense wildfires, heat waves and drought.

There is nowhere — and no one — that will not be affected. A "wobble" in the moon's orbit may lead to record floods on Earth. 1.Moftakhari, H. 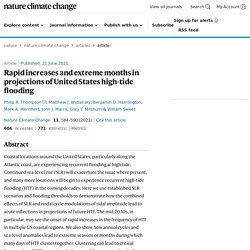 R., AghaKouchak, A., Sanders, B. F. & Matthew, R. A. Cumulative hazard: the case of nuisance flooding. Earth’s Future 5, 214–223 (2017).Article Google Scholar 2.Moftakhari, H. A "wobble" in the moon's orbit may lead to record floods on Earth. Every coast in the U.S. is facing rapidly increasing high tide floods thanks to a "wobble" in the moon's orbit working in tandem with climate change-fueled rising sea levels. 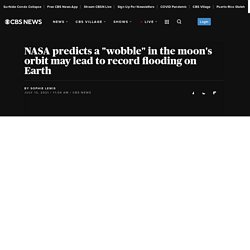 A new study from NASA and the University of Hawaii, published recently in the journal Nature Climate Change, warns that upcoming changes in the moon's orbit could lead to record flooding on Earth in the next decade. Through mapping the National Oceanic and Atmospheric Administration's (NOAA) sea-level rise scenarios, flooding thresholds and astronomical cycles, researchers found flooding in American coastal cities could be several multiples worse in the 2030s, when the next moon "wobble" is expected to begin.

The Real Reason Experts Had To Seal Up The Deepest Hole On The Planet. There is a remote peninsula in northwestern Russia that has always been the source of great mystery. 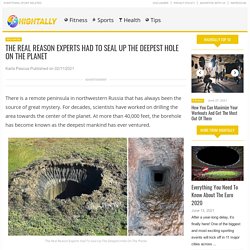 For decades, scientists have worked on drilling the area towards the center of the planet. At more than 40,000 feet, the borehole has become known as the deepest mankind has ever ventured. The Real Reason Experts Had To Seal Up The Deepest Hole On The Planet The Unexpected And then something unusual happened, and their strategies were thrown off. The Unexpected Above And Below We are not surprised to hear that mankind has a fascination with whatever is lying below the surface.

Above And Below. Coal companies hope to move forward with mines in Alberta despite roadblocks. Two coal companies planning to develop mines in Alberta's Rocky Mountains say they hope to move forward despite new regulatory and political roadblocks. © Provided by The Canadian Press "We feel that our mine plan that we are going to present is unique to the situation we're in," said Peter Doyle, head of Montem Resources, which hopes to build a new open-pit mine in southern Alberta on a previously worked deposit. 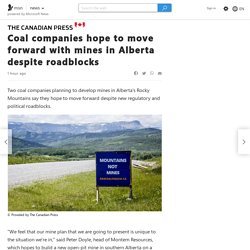 Load Error. Panel says Grassy Mountain coal mine in Alberta Rockies not in public interest. A joint federal-provincial review has denied an application for an open-pit coal mine in Alberta's Rocky Mountains, saying its impacts on the environment and Indigenous rights aren't worth the economic benefits it would bring. © Provided by The Canadian Press In its 680-page report released Thursday, the panel questioned the ability of Benga Mining, owned by Riversdale Resources, to control the release of selenium from its proposed Grassy Mountain mine. 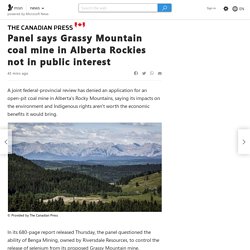 Load Error "In some cases the claimed effectiveness of the proposed measures was overly optimistic and not supported by the evidence," the report says. "As a result, we are not confident about the technical and economic feasibility of some proposed mitigation measures. 'Climate change is borderless crisis' Protecting ecosystems is one of the best ways to fight climate change. Rights for nature: How granting a river 'personhood' could help protect it. The Muteshekau Shipu (Magpie River) runs nearly 300 kilometres in Québec’s Côte-Nord region. 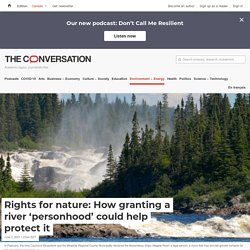 The river is culturally significant for the Innu and it is popular with white water paddlers and rafters. Despite efforts to protect the river, Muteshekau Shipu continues to be threatened by potential new hydroelectric dam development. But, in February, the Innu Council of Ekuanitshit and the Minganie Regional County Municipality declared the Muteshekau Shipu (Magpie River) a legal person, a move that may provide greater certainty for this majestic river’s future.

While a first in Canada, granting legal personhood to natural entities is part of a global movement to recognize the rights of nature in law. This 230-year-old oak gave its life for the new Notre Dame spire. Article content In what was once a royal forest, 250 kilometres southwest of Paris, grows a tract of centuries-old trees. 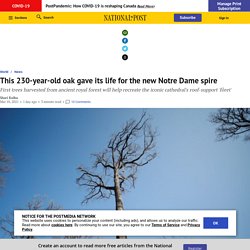 They’re straight, they’re solid and they’re going to go down — or, rather, up — in history. They’ll soon become the new roof and spire elements of the parts of the Notre Dame cathedral that went up in flames in 2019. In La Fôret de Bercé this week, tree surgeons began felling a handful of its best white oaks. Step by step, a woodsman would spike his way up a trunk, cut off each tree’s unwanted branches, then spike his way back down so the crew could cut down the remaining trunk. Forest research makes UBC professor a Hollywood star. Things That May Be Gone From Earth By 2050 - The Delite. Once said to be the most abundant amphibian in Southern California’s Sierra Nevada and Transverse mountain ranges, the mountain yellow-legged frog has become endangered. 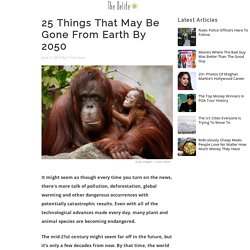 Even though they can survive freezing, high-elevation winters, these frogs have largely succumbed to other dangers. They are extinct in more than 93 percent of their former homes and scientists predict they could be completely extinct within decades. The U.S. Fish and Wildlife Service created a recovery plan in 2018 aimed at helping save this species. Say it isn’t so! Researchers estimate there are only about 450 of these Atlantic Ocean-dwelling whales in existence. We’ll admit, being stung is no fun, but bees are important little critters. This B.C. ecosystem came back from ecological disaster — now climate change could undo it. RCMP lay charge after woman's body found along highway west of Calgary. The past year has taught us important lessons about the consequences of the harm humans are inflicting on the natural world. 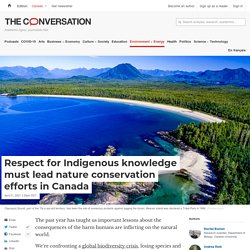 We’re confronting a global biodiversity crisis, losing species and natural places at an unprecedented rate. We’ve also experienced the repercussions of nature’s decline through COVID-19, whose jump from animals to humans may be linked to habitat destruction. And yet the international community failed to achieve a single Aichi Biodiversity Target to curb environmental destruction by 2020.

Earth Hour 2021 - Take part. Earth Hour 2021: Here's what you need to know. Earth Hour is an annual tradition in which people switch off their lights to spread awareness about sustainability and climate change. Started by the World Wildlife Fund, it takes place on March 27 from 8:30 p.m. to 9:30 p.m. local time. (And it's not to be confused with Earth Day) The symbolic effort started in 2007 in Sydney, Australia, when the WWF encouraged 2.2 million people to turn off their lights for one hour to support action on climate change.

Since then, millions of people around the world have taken part. Landmarks such as the Eiffel Tower, Big Ben, Sydney Opera House, the Empire State Building, Buckingham Palace, the Colosseum and Edinburgh Castle also have gone dark for an hour. What is it intended to do? It's meant to bring together people who share one common goal: an ecofriendly future. The home of Canada's energy sector is set to outpace the country in renewables growth: forecast. 'We got rid of it:' Canada, U.S. mark 30th anniversary of acid rain treaty. Tens of thousands of lakes were dying, their lifeless waters clear to the depths. Public statues were eroding, their features eaten away by acid falling from the skies. © Provided by The Canadian Press No more.

Load Error Thirty years after Canada and the United States signed a treaty on reducing acid rain, the deal has become a landmark — and a guidebook — on how nations can work together to solve environmental problems. 'It starts at home:' Former PM Brian Mulroney reflects on lessons from acid rain. The 30th anniversary of one of the most successful environmental treaties ever reached holds lessons for today's fight against climate change, says the man who negotiated the deal. © Provided by The Canadian Press "It starts at home," said former prime minister Brian Mulroney, who signed the Canada-United States Air Quality Agreement with U.S.

U of A researcher pitches mineral carbonation as solution to climate change to U.S. policy makers. In December, Sasha Wilson sat in front of U.S. policy-makers to lend her expertise in the battle against climate change by suggesting it's possible to remove gigatonnes of carbon from the atmosphere and turning it into rock. Scientists have warned that all countries must reach net zero carbon emissions by 2050 or sooner to avoid the worst consequences of climate change. The Canadian government pledged to do so as part of the 2015 Paris Agreement. Wilson, a biogeochemist and an associate professor in the Faculty of Science, is studying how mineral carbonation can suck carbon dioxide, a heat-trapping gas, from the atmosphere. Wilson and her colleagues with the American non-profit Energy Futures Initiative recommended the United States scale up research and development of mineral carbonation by setting up a large network of test sites. Mineral carbonation is a natural process where carbon dioxide reacts with minerals to form harmless carbonates.

In ‘How to Avoid a Climate Disaster,’ Bill Gates charts a difficult course that might just be doable. The "15-Minute City" is a new environmental vision gaining ground. From Paris to Portland, a number of cities around the world are working towards creating neighborhoods where residents have everything they need just a short walk or bike ride from their home. It’s called the “15-Minute City” since, if designed properly, anyone who lives there should be able to access all their basic needs in a 15-minute walk, bike, or transit ride. According to city planners, designers, architects, and mayors across the globe, it is the “it” thing right now. Prince Charles Says He Thinks People Thought He Was ‘Completely Dotty’ When He Began Talking About Environmental Issues In The 1970s.

Earth's ocean levels are rising due to climate change. NASA, the ESA, and SpaceX have just launched the next satellite to track these changes and help us better protect our vulnerable coastlines as the world continues to warm. On Saturday, November 21, at 12:17 p.m. Whales to trout: Ottawa announces $50M for research into fisheries ecosystems. The federal government has announced more than $50 million for research into marine and freshwater ecosystems across Canada. © Provided by The Canadian Press. Quebec to ban sale of new gasoline-powered cars from 2035. Instagram. Trudeau government close to unveiling plan to hit net-zero emissions by 2050.

The federal government is set to introduce climate accountability legislation as early as next week to formally commit Canada to its target of net-zero greenhouse gas emissions by 2050. Universities in Western Canada are going all-in on climate change research. Putin orders Russian government to try to meet Paris climate goals. Why the youth climate court case failed, and what's next for Canadian climate policy.

COP21 - Paris Climate Conference 2015. (VIDEOS) Royals Arrive in Paris for the Opening of the COP21. These Five Videos Explain What You Need to Know About COP21. 3 Key Ingredients for the COP21 Paris Agreement. Climate Strike: Protesters March Around The World Demanding Climate Change Action.