Current Issues in the news 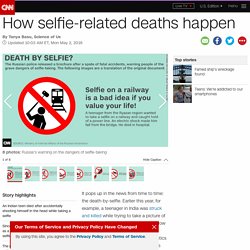 (And this is likely an underestimate, as not every selfie-related death was probably reported in the media.) More than a quarter of selfie-related deaths, perhaps unsurprisingly, are concentrated among 21-year-olds, and 75 percent are male. The most dangerous places to take a self-portrait seem to be high places or in water: 16 people died from falling off a cliff or a tall building, while 14 drowned. 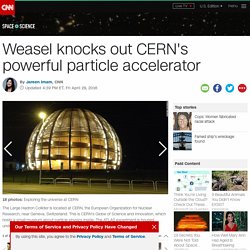 Engineers who were investigating the outage made a grisly discovery -- the charred remains of a weasel, CERN spokesman Arnaud Marsollier told CNN. The little critter gnawed through a 66-kilovolt transformer inside an electrical facility outside the main building. Just for perspective, one kilovolt is 1,000 volts of energy. Chewing the wiring ended up frying the creature into oblivion and causing a wide power outage around CERN, the European Organization for Nuclear Research. The unexpected power loss has shut down the Large Hadron Collider for at least a week as engineers work to make repairs and address other issues, Marsollier said. 50% of teens feel addicted to their phones, poll says. A new poll that confirms just how much teens depend on their phones gives me even more to worry about. 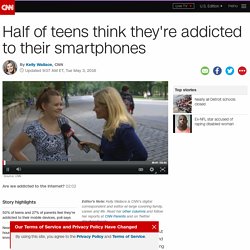 "If your teens would prefer gaming indoors, alone, as opposed to going out to the movies, meeting friends for burgers or any of the other ways that teens build camaraderie, you may have a problem. " How many teens are truly addicted to their devices and the Internet? It is difficult to say. A 2011 review of 18 research studies found that Internet addiction might affect between zero and 26% of adolescents and college students in the United States, according to Common Sense Media. Teens create device to protect from football concussions.

Football programs in the area are reporting a sudden decline of interest in playing the sport in high school as more and more parents learn the concern of concussions. 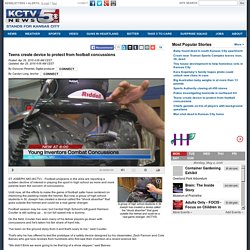 Until now, all the efforts to make the game of football safer have centered on improving the padding inside the helmet. But now, a group of high school students in St. Joseph has created a device called the "shock absorber" that goes outside the helmet and could be a real game changer. China denies U.S. aircraft carrier port visit. "We were recently informed that a request for a port visit by a U.S. carrier strike group, including the USS John C. 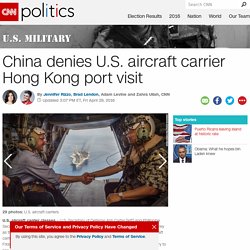 Stennis and accompanying vessels, to Hong Kong was denied," he said. "We have a long track record of successful port visits to Hong Kong, including with the current visit of the (command ship) USS Blue Ridge, and we expect that will continue. " It was not immediately clear why the Stennis was denied port access. A spokesman for the Hong Kong Security Bureau declined to comment on the decision, saying the Hong Kong Special Administrative Region government wouldn't comment on the individual visit application of foreign warships.

The port access denial comes just two weeks after Defense Secretary Ash Carter visited the Stennis while the carrier was operating in the South China Sea. Indian teen dies after taking gun selfie. Fifteen-year-old Ramandeep Singh was posing with his father's .32 caliber pistol on Friday evening when he accidentally pulled the trigger, according Manoj Kumar, Deputy Superintendent of Police in Pathankot, Punjab state. 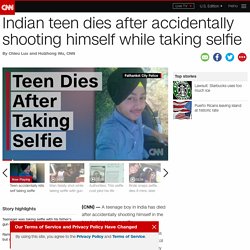 The safety catch wasn't on, police said. Singh was taken to hospital where he underwent surgery but died of his injuries on Sunday afternoon. Bong video drops NFL prospect down draft board. AT&T offering $5 internet to low-income families - Apr. 22, 2016. Any home where at least one person receives food stamps will be eligible for the new program, called Access from AT&T. 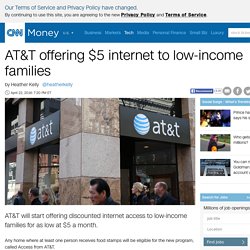 The offering is part of an agreement AT&T (T, Tech30) made with the FCC as part of last year's DirectTV merger and will be available until 2020. The company is the latest to offer discounted internet to low-income households in the United States, joining Comcast (CCV), Google Fiber, and some local government and nonprofit.

Related: Lifeline vote could help millions of poor families get online. Georgia governor to veto LGBT bill. House Bill 757 would have given faith-based organizations in Georgia the option to deny services and jobs to gay, lesbian, bisexual and transgender people. 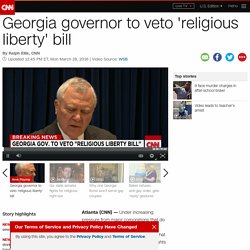 Supporters said the measure was meant to protect religious freedom, while opponents have described it as "anti-LGBT" and "appalling. " Speaking to reporters Monday morning, Deal, a Republican, said he didn't think the bill was necessary. "I do not think we have to discriminate against anyone to protect the faith-based community in Georgia, of which I and my family have been a part of for all of our lives," he said. He said he was not reacting to pressure from the faith-based community or responding to the business community, which warned Georgia could lose jobs if he signed the bill.

His decision, he said, was "about the character of our state and the character of our people. Fidel Castro blasts Obama's Cuba trip. In a full page column titled "Brother Obama," published in the Cuban communist-party newspaper Granma, the former Cuban president rejected Obama's visit and words of reconciliation. 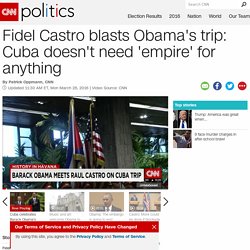 "We don't need the empire to give us anything," Castro wrote, referring to the United States, in his acidly critical and rambling column. In 2008, Fidel Castro turned power over to his brother Raul following a mystery intestinal illness that nearly killed him. While officially retired, Fidel Castro, 89, still wields enormous influence in Cuba and observers study his sporadic columns and appearances for insights into Cuba's opaque political system. Time Warner latest to take stand on Georgia's 'anti-LGBT' bill - Mar. 24, 2016. "We urge Governor Deal to exercise his veto," the company said in a statement Thursday. 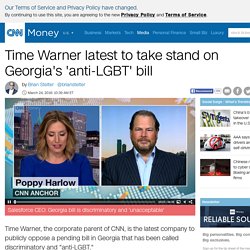 The three divisions of Time Warner (TWX) -- HBO, Turner and Warner Bros. -- all do business in Georgia. Turner, the division that houses CNN, is based in Atlanta and has thousands of employees in Georgia. Several other major media companies -- Disney (DIS), Viacom (VIA) and AMC Networks (AMCX) -- have also publicly opposed the bill.

Other firms like Apple (AAPL, Tech30), Dell, Hilton (HLT) and Marriott (MAR) have also spoken out. Newtown High School students charged in 'sexting' ring. Last May, students began transmitting sexually explicit images and videos on cell-phone text messaging apps such as Snapchat, Facetime, iMessage, KiK and others, according to a press release from the Newtown Police Department. Three male juveniles were arrested Tuesday night and charged with obscenity, transmitting or possession of child pornography by a minor as well as felony counts of possession of child pornography and obscenities as to minors, according to Sgt.

Aaron Bahamonde of the Newtown Police Department. It's unclear whether the juveniles have attorneys. Another 20 students have been referred to a community-based Juvenile Review Board, which delivers a "consequence on the juvenile-aged offender, yet keeps the juvenile offender out of the State of Connecticut Criminal Justice System," according to the press release. New 'Superman' crystals can store data for billions of years - Feb. 17, 2016. Researchers in the U.K. have developed a way of storing digital data inside tiny structures contained in glass. The storage technology is so stable and safe that it can survive for billions of years, scientists at the University of Southampton said this week. That's a lot longer than your average computer hard drive. Sadly, the human inventions don't look like the glittering crystals that Superman uses to generate holograms of people from his home planet.

Instead, they take the form of small glass discs that have already been used to store historic documents, like the Universal Declaration of Human Rights and the Bible. "This technology can secure the last evidence of our civilization: all we've learned will not be forgotten," said Peter Kazansky, a professor at the university. Peyton Manning cited in Title IX suit against University of Tenn. Filed on behalf of six unidentified accusers, the lawsuit alleges that the university violated federal Title IX regulations against sex discrimination and fostered "a hostile sexual environment and culture.

" The university denies permitting a culture of sexual assault to thrive. The lawsuit was filed in federal court in Nashville last week, two days after Manning led the Denver Broncos to victory in Super Bowl 50. It centers on five alleged rapes of female students reported between 2013 and 2015. "We came together to change what is done about sexual assault," one of the accusers, identified in the lawsuit as Jane Doe 1, said in a phone interview. Alphabet, aka Google, is now the world's most valuable company. - Feb. 2, 2016. Shares of Alphabet, the parent company of Google, rose nearly 4% Tuesday morning thanks to its strong earnings report. As a result, Alphabet (GOOGL, Tech30) started the day with a market valuation of about $551 billion.

Apple's (AAPL, Tech30) stock fell 1%, pushing its market value down to $531 billion. Alphabet -- can I just call it Google in the way the Arsenio Hall barber character in "Coming To America" refused to refer to Cassius Clay as Muhammad Ali? Zika virus a 'public health emergency,' WHO says. The agency said the emergency is warranted because of how fast the mosquito-borne virus is spreading and its suspected link to an alarming spike in babies born with abnormally small heads -- a condition called microcephaly -- in Brazil and French Polynesia.

Reports of a serious neurological condition, called Guillame-Barre Syndrome, that can lead to paralysis, have also risen in areas where the virus has been reported. Health officials have specifically seen clusters of this in El Salvador, Brazil and French Polynesia, according to WHO's Dr. Bruce Aylward. Your politics don't translate to your kids. Students using standing desks to learn. NASA: Liquid water exists on Mars.