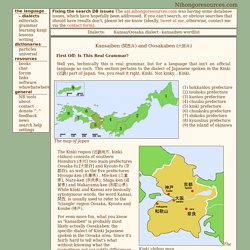 Well yes, technically this is real grammar, but for a language that isn't an official language as such. This section pertains to the dialect of Japanese spoken in the Kinki (近畿) part of Japan. Yes, you read it right, Kinki. Not kinky... Before we continue, I would like to recommend everyone who's interested in this dialect to purchace "Colloquial Kansai Japanese" by DC Palter and Kaoru Slotsve (isbn 0804837236, Tuttle publishing, roughly US$15). The Differences There are three differences between standard Japanse (hyoujungen, 標準語) and Oosaka dialect. We start with the syntax differences: compared to standard Japanese, words are pronounced differently, according to a few 'rules' (of which the most important one is: If you hear it used by someone in the kansai region, then that's how you use it). 1. 2. 3. 4. 5. 6. 7. To make matters even worse (or not!)

The grammar Negation (mizenkei + nai) examples of the izenkei negation. Japanese Tips. I set about learning Japanese the hard way--with a stack of manga and novels and two dictionaries. 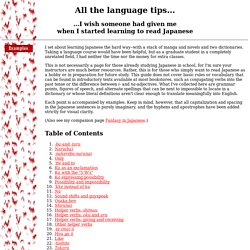 Taking a language course would have been helpful, but as a graduate student in a completely unrelated field, I had neither the time nor the money for extra classes. This is not necessarily a page for those already studying Japanese in school, for I'm sure your instructors are much better resources. Rather, this is for those who simply want to read Japanese as a hobby or in preparation for future study. This guide does not cover basic rules or vocabulary that can be found in introductory texts available at most bookstores, such as conjugating verbs into the past tense or the difference between i- and na-adjectives. What I've collected here are grammar points, figures of speech, and alternate spellings that can be next to impossible to locate in a dictionary or whose literal definitions aren't clear enough to translate meaningfully into English. 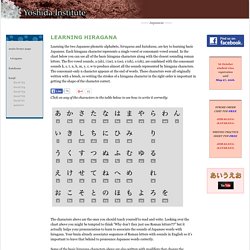 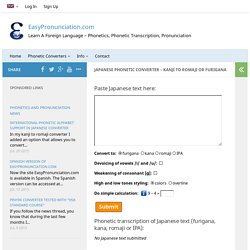 Japanese language has only five vowels; consonant sounds are also not very difficult to learn. First of all, what is pitch accent? He has a perfect [ˈpərfɪkt] pronunciation.I want to perfect [pərˈfekt] my pronunciation. In the above example, if you put stress on the right syllable and pronounce the words correctly, you are better understood and sound natural. Before I go any further I would like to describe different types of phonetic transcription in Japanese, or ways to visually represent the pronunciation of Japanese words. Romaji that uses Latin alphabet,Furigana that uses Japanese alphabet kana near kanji (Japanese characters),Internation Phonetic Alphabet (IPA). Do you like this converter? HTML link code. Multi-lingual language learning and language exchange.

『「The Art Of、 Japanese Punctuation〜」。』！？ - Tofugu. Rikaichan. About Rikaichan is a popup Japanese-English/German/French/Russian dictionary tool for Firefox, Thunderbird and Seamonkey. 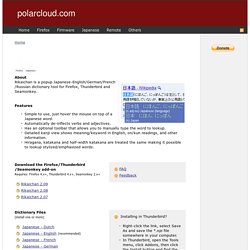 Features Simple to use, just hover the mouse on top of a Japanese word. Automatically de-inflects verbs and adjectives. Has an optional toolbar that allows you to manually type the word to lookup. Rikaichan 2.09 Rikaichan 2.08 Rikaichan 2.07 Installing in Thunderbird? Dictionary Files(install one or more)