GcMAF: Another Suppressed Cancer Treatment? Reports have been circulating around the natural health community of a compound known as Gc-protein derived macrophage activating factor, or GcMAF, and its remarkable effects on cancer. 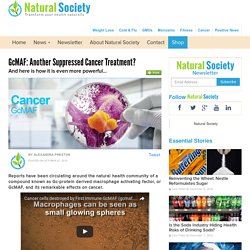 One of these is a video clip (above) of an in vitro attack of macrophages, a type of immune cell, which have been treated with GcMAF against human breast cancer cells. This can be best described by the common internet meme caption of “nom nom nom,” as the clusters of cancer cells are mercilessly devoured. Fortunately for humans, research on real patients has shown that its effects are not confined to a laboratory. In human patients, however, GcMAF is not administered alone. In this study, GcMAF is described as being complexed with oleic acid (OA), which is found in olive oil. Although these patients all suffered from advanced cancers, within a few weeks, their tumor volume had decreased by an average of 25%. Related: Cancer-Fighting Foods – 4 Anti-Cancer Edibles. This Simple Leaf Prevents Stroke, Hypertension, Diabetes, Alzheimer’s, and More – REALfarmacy.com. By PAUL FASSA [box]“Based on my research, I am convinced that olive leaf extract is destined to become the most useful, wide spectrum herbal ingredient of the 21st century.” – Morton Walker, medical journalist, 92 published books including: Nature’s Antibiotic: Olive Leaf Extract. 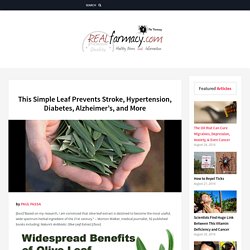 [/box] Olive leaf is derived from the olive tree (Olea europaea), which is native to the Mediterranean. Olives and olive leaf are the first botanicals prominently noted in the Bible, in Ezekiel 47:12, “The fruit thereof shall be for meat, and the leaf thereof for medicine” – thus its nickname, “Tree of Life.” In Ancient Egypt the olive leaf was a symbol of heavenly power. In ancient Greek mythology the olive tree was a gift from the goddess Athena. Olive leaf was first mentioned officially in Europe as medicine about 150 years ago. The bitter substance is a molecule called oleuropein (pronounced O-lee-u-ro-peen). Oleuropein is also in olive oil.

Olive Leaf is a Broad Spectrum Healer According to Dr. Dr. 1. 2. . [1] Ingredient in olive oil kills cancer cells with their own enzymes. A Rutgers nutritional scientist and two cancer biologists at New York City's Hunter College have found that an ingredient in extra-virgin olive oil kills a variety of human cancer cells without harming healthy cells. 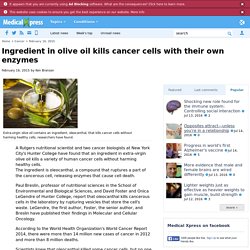 The ingredient is oleocanthal, a compound that ruptures a part of the cancerous cell, releasing enzymes that cause cell death. Paul Breslin, professor of nutritional sciences in the School of Environmental and Biological Sciences, and David Foster and Onica LeGendre of Hunter College, report that oleocanthal kills cancerous cells in the laboratory by rupturing vesicles that store the cell's waste. LeGendre, the first author, Foster, the senior author, and Breslin have published their findings in Molecular and Cellular Oncology. According to the World Health Organization's World Cancer Report 2014, there were more than 14 million new cases of cancer in 2012 and more than 8 million deaths. 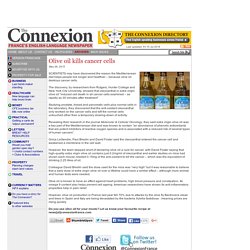 The discovery, by researchers from Rutgers, Hunter College and New York City University, showed that oleocanthal in extra virgin olive oil “induced cell death in all cancer cells examined – as rapidly as 30 minutes after treatment”. Studying prostate, breast and pancreatic cells plus normal cells in the laboratory, they discovered that the anti-oxidant oleocanthal only worked on the cancer cells and left the normal cells untouched other than a temporary slowing-down of activity. Revealing their research in the journal Molecular & Cellular Oncology, they said extra virgin olive oil was a key part of the Mediterranean diet and was known to contain “an abundance of phenolic antioxidants that are potent inhibitors of reactive oxygen species and is associated with a reduced risk of several types of human cancers”. 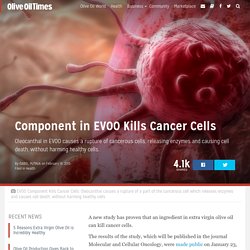 The results of the study, which will be published in the journal Molecular and Cellular Oncology, were made public on January 23, 2015. The researchers, nutritional scientist Paul Breslin (Rutgers University), biologist David Foster (Hunter College) and chemist Onica LeGendre (Hunter College) discovered in a lab study that the ingredient, called oleocanthal, causes a rupture of a part of the cancerous cell which releases enzymes and causes cell death, without harming healthy cells. In this way, cancer cells are killed by their own enzymes. “Oleocanthal is a name for a chemical in extra virgin olive oil (EVOO) that means ‘Stinging Oil Aldehyde’,” Paul Breslin told Olive Oil Times.

“It is made by the olive when it is crushed to make the pulp from which the oil is pressed.”