Breaking: Burzynski Cancer Cure Finally Released By The Feds. Houston doctor, Stanislaw Burzynski has won yet another huge victory against the medical establishment. 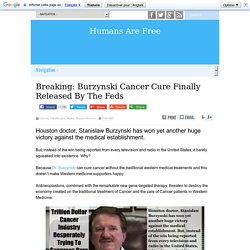 But, instead of the win being rep... Houston doctor, Stanislaw Burzynski has won yet another huge victory against the medical establishment. But, instead of the win being reported from every television and radio in the United States, it barely squeaked into existence. Why? Because Dr. Antineoplastons, combined with the remarkable new gene-targeted therapy, threaten to destroy the economy created on the traditional treatment of Cancer and the care of Cancer patients in Western Medicine. By curing the cancers, there no longer needs to be excessively costly treatments and support given the patient. GetSharedSiteSession?rc=4&redirect= Burzynski Cancer Cure Finally Released By The Feds. 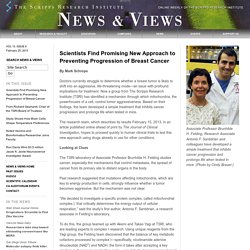 Now a group from The Scripps Research Institute (TSRI) has identified a mechanism through which mitochondria, the powerhouses of a cell, control tumor aggressiveness. Based on their findings, the team developed a simple treatment that inhibits cancer progression and prolongs life when tested in mice. The research team, which describes its results February 15, 2013, in an article published online ahead of print by The Journal of Clinical Investigation, hopes to proceed quickly to human clinical trials to test this new approach using drugs already in use for other conditions.

Looking at Clues The TSRI laboratory of Associate Professor Brunhilde H. To do this, the group teamed up with Akemi and Takao Yagi at TSRI, who are leading experts in complex I research. Exciting Results. Scientists in Amsterdam just destroyed breast cancer tumors in 11 days without chemo : The Hearty Soul. Any day where a new study shows a potential cure for cancer is a good day, and scientists in Europe may have found a breakthrough for breast cancer. 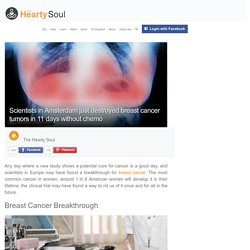 The most common cancer in women, around 1 in 8 American women will develop it in their lifetime; the clinical trial may have found a way to rid us of it once and for all in the future. Breast Cancer Breakthrough Research presented by Professor Nigel Bundred at the European Breast Cancer Conference in Amsterdam revealed that they had tested the effectiveness of a pair of drugs known as Herceptin (a.k.a trastuzumab) and Lapatinib. The two drugs are commonly used in breast cancer treatment already, but this is the first time they had been combined together and used before surgery and chemotherapy. Human Cells Have Electric Fields as Powerful as Lightning Bolts. Via DailyGalaxy.com Using newly developed voltage-sensitive nanoparticles, researchers have found that the previously unknown electric fields inside of cells are as strong, or stronger, as those produced in lightning bolts. 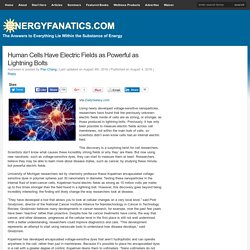 Previously, it has only been possible to measure electric fields across cell membranes, not within the main bulk of cells, so scientists didn’t even know cells had an internal electric field. This discovery is a surprising twist for cell researchers. Scientists don’t know what causes these incredibly strong fields or why they’ are there. But now using new nanotools, such as voltage-sensitive dyes, they can start to measure them at least. Cancer Immunotherapy - CRI. The Next Great Advance in Cancer Treatment is Here Cancer immunotherapy—treatments that harness and enhance the innate powers of the immune system to fight cancer—represents the most promising new cancer treatment approach since the development of the first chemotherapies in the late 1940s. 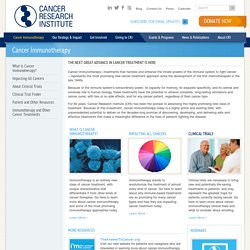 Because of the immune system’s extraordinary power, its capacity for memory, its exquisite specificity, and its central and universal role in human biology, these treatments have the potential to achieve complete, long-lasting remissions and cancer cures, with few or no side effects, and for any cancer patient, regardless of their cancer type. Harnessing the Immune System to Fight Cancer. “Immunotherapy represents a hugely important new tool, but chemotherapy can work too and has been the backbone of the way we’ve treated patients with lung cancer,” he said. 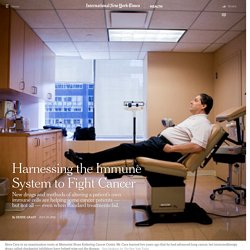 “Immunotherapy is not a replacement for that. The ‘Quantum Theory’ of Cancer Treatment — NOVA Next. In April 2011, Christopher Barker, a radiation oncologist at Memorial Sloan Kettering Cancer Center in New York, received some unusual news about a participant in a clinical trial. 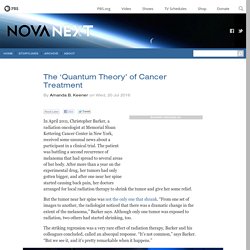 The patient was battling a second recurrence of melanoma that had spread to several areas of her body. After more than a year on the experimental drug, her tumors had only gotten bigger, and after one near her spine started causing back pain, her doctors arranged for local radiation therapy to shrink the tumor and give her some relief. But the tumor near her spine was not the only one that shrank. Health Article: blocking cancer growth with L-Lysine. Nutrients Found May Block Cancer Growth (L-Lysine) Matthias Rath, the international research company founded by the scientist of the same name, has discovered that a number of specific nutrients may be used to prevent the invasion of cancer. 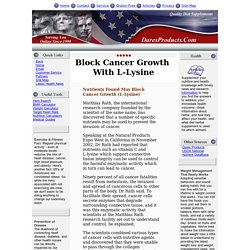 Speaking at the Natural Products Expo West in California in November 2002, Dr Rath had reported that nutrients such as vitamin C and L-lysine which support connective tissue integrity can be used to control the harmful enzymatic activity which in turn can lead to cancer. Ninety percent of all cancer fatalities result from metastasis, the invasion and spread of cancerous cells to other parts of the body, Dr Rath said. 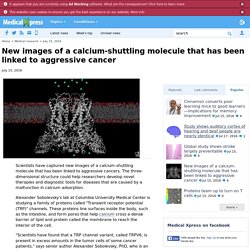 The three-dimensional structure could help researchers develop novel therapies and diagnostic tools for diseases that are caused by a malfunction in calcium adsorption. Alexander Sobolevsky's lab at Columbia University Medical Center is studying a family of proteins called "Transient receptor potential (TRP)" channels. These proteins line surfaces inside the body, such as the intestine, and form pores that help calcium cross a dense barrier of lipid and protein called the membrane to reach the interior of the cell. Beyond Resveratrol: The Anti-Aging NAD Fad - Scientific American Blog Network. Aging cells. Old human fibroblasts showing their mitochondria in large branched networks (red), their nuclear DNA (blue) and sites of DNA damage (green).

(Image: Glyn Nelson/Flickr) Whenever I see my 10-year-old daughter brimming over with so much energy that she jumps up in the middle of supper to run around the table, I think to myself, "those young mitochondria. " Mitochondria are our cells' energy dynamos. Descended from bacteria that colonized other cells about 2 billion years, they get flaky as we age. Inhibition of de novo NAD(+) synthesis by oncogenic URI causes liver tumorigenesis through DNA damage. 'Cancer cells simply melt away': Miracle drug amazes Australian researchers after lengthy trials.

Cancer patients are finally catching a break, as Australian researchers have tested a miracle drug that leads to big improvement in a majority of cases, and total recovery in some. 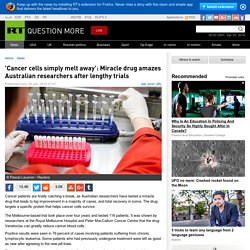 The drug targets a specific protein that helps cancer cells survive. The Melbourne-based trial took place over four years and tested 116 patients. It was shown by researchers at the Royal Melbourne Hospital and Peter MacCallum Cancer Centre that the drug Venetoclax can greatly reduce cancer blood cells. Positive results were seen in 79 percent of cases involving patients suffering from chronic lymphocytic leukemia.

This New Metabolic Theory of Cancer May Change the World of Cancer Prevention and Recovery. Video Source: Mercola By Dr. Mercola | mercola.com Each day, some 1,600 people die of cancer in the United States. That number goes up 10-fold, up to 21,000 if you include the global population. While conventional medicine has little to offer outside the standard “cut, poison, burn” approach, new evidence suggests simple dietary modifications could effectively both treat and prevent the majority of these cancers. Turning cancer back into healthy tissue. Image copyright STEVE GSCHMEISSNER/SCIENCE PHOTO LIBRARY Scientists believe they may have found a way to turn cancerous cells back into healthy tissue.

Their lab-based work suggests there is a biological step that can restore normality and stop cells replicating out of control. When the US researchers added molecules called microRNAs, it put the brakes on cancer, Nature Cell Biology reports. Although the early tests in a dish look promising, it is unclear whether it will help treat people with cancer. Scientists discover electrical control of cancer cell growth. The molecular switches regulating human cell growth do a great job of replacing cells that die during the course of a lifetime. But when they misfire, life-threatening cancers can occur. Research led by scientists at The University of Texas Health Science Center at Houston (UTHealth) has revealed a new electrical mechanism that can control these switches.

This information is seen as critical in developing treatments for some of the most lethal types of cancer including pancreatic, colon and lung, which are characterized by uncontrolled cell growth caused by breakdowns in cell signaling cascades. The research focused on a molecular switch called K-Ras. Mutated versions of K-Ras are found in about 20 percent of all human cancers in the United States and these mutations lock the K-Ras switch in the on position. Findings appear in Science, a journal of the American Association for the Advancement of Science.

"This has huge implications for biology," Hancock said. Demethylation effect of the antineoplaston AS2-1 on genes in colon cancer cells. Dr. Burzynski's Cancer Treatment. This 19-Year-Old May Have Discovered The Cure For Colon Cancer… This brilliant teen created tests with an experimental colon cancer vaccine that proved 100 percent effective in tests on young mice. As the third leading cause of cancer-related deaths in the world, colorectal cancer is a concern not to be taken lightly. It is estimated that 1.4 million cases were diagnosed in 2012, and without proper dietary and lifestyle modifications, will only increase in the near future. And while a pescetarian diet (vegetarian that includes fish) is estimated to. Melanoma Tumor 'Dissolves' After 1 Dose of New Drug Combo. Cannabinoids and gliomas. [Mol Neurobiol. 2007] Cancer roundhouse - Evidence mounts that a single antibody could knock out many cancers - 2012 SUMMER - Stanford Medicine Magazine - Stanford University School of Medicine.

“It’s no fun to manage a patient’s death,” says Stanford physician and researcher Ravi Majeti, MD, PhD, with grim and deliberate understatement. As a physician specializing in treating leukemia and lymphoma, Majeti is often required to perform that task with as much compassion and empathy as possible.