Observation Status Infographic. Dr. Mercola Says Annual Physicals May Do More Harm Than Good (Video) By Dr Mercola Mercola.com America spends more per capita on health care than any other developed nation, yet Americans are among the sickest citizens of the developed world, ranking only 50th worldwide for life expectancy.Americans also rank near the bottom for everything from infant mortality to obesity, heart disease, and disability.1 A growing number of studies suggest that part of the problem is actually excessive medical intervention.Americans are receiving — and paying for — an enormous amount of unnecessary and/or ineffective medical tests and treatments.According to a report by the Institute of Medicine, approximately 30 percent of all medical procedures, tests, and medications may be unnecessary, at a cost of more than $750 billion a year.2The worst part is that this overtreatment is making Americans sicker rather than healthier. 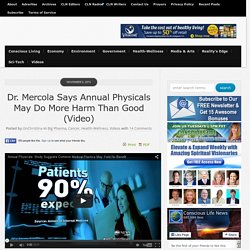 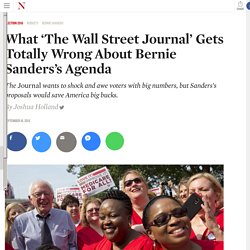 AOL's Million-Dollar Distressed-Baby Claim: Could It Possibly Be True? Business One human-resources expert says it's hard to imagine how company structured like AOL could ever pay $2 million for two pregnancies gone wrong. 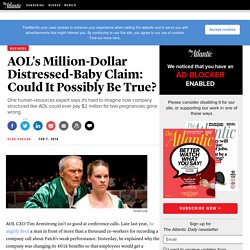 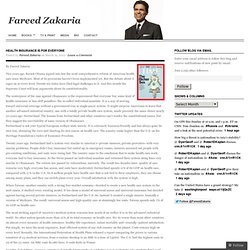 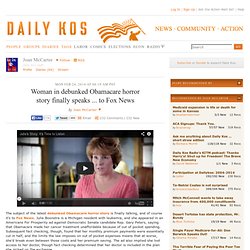 Julie Boonstra is a Michigan resident with leukemia, and she appeared in an Americans For Prosperity ad against Democratic Senate candidate Rep. Gary Peters, saying that Obamacare made her cancer treatment unaffordable because of out of pocket spending. Subsequent fact checking, though, found that her monthly premium payments were essentially cut in half, and the limits the law imposes on out of pocket expenses means that at worse, she'd break even between those costs and her premium saving. No, Obamacare Doesn’t Deserve Credit for Slowing the Growth of Health Spending. Whitehouse.govFor the fourth year in a row, Medicare’s actuaries reported that total national health spending—encompassing public and private payers—grew modestly. 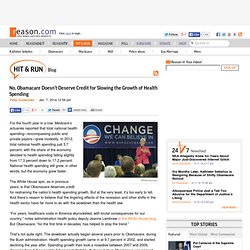 In 2012, total national health spending just 3.7 percent, with the share of the economy devoted to health spending falling slightly from 17.3 percent down to 17.2 percent. National health spending still grew, in other words, but the economy grew faster. The White House spin, as in previous years, is that Obamacare deserves credit for restraining the nation's health spending growth. Why the U.S. should treat health care like a utility, not a market. Reprinted from dailykos.com by Jon Perr (image by see image) On January 1, 2014, the Affordable Care Act went fully into effect. 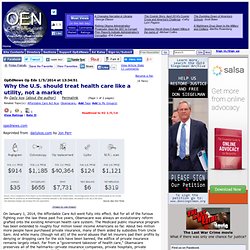 But for all of the furious fighting over the law these past five years, Obamacare was always an evolutionary reform grafted onto the existing American health care system. The Medicaid public insurance program has been extended to roughly four million lower income Americans so far. No, Obamacare Won’t Reduce Emergency Room Usage. Stockvault.netSupporters of Obamacare have long pitched the law as a way to address emergency room crowding caused by lack of health coverage. 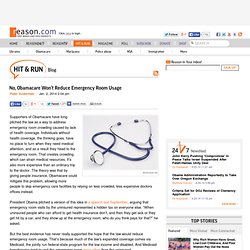 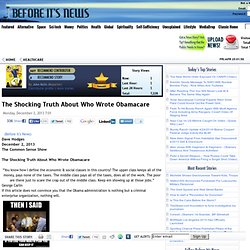 Obama administration knew millions could not keep their health insurance. Larry Downing / Reuters President Barack Obama walks out to deliver remarks about the Affordable Care Act in the Rose Garden of the White House in Washington on Oct. 1, 2013. By Lisa Myers and Hannah Rappleye, NBC News President Obama repeatedly assured Americans that after the Affordable Care Act became law, people who liked their health insurance would be able to keep it. But millions of Americans are getting or are about to get cancellation letters for their health insurance under Obamacare, say experts, and the Obama administration has known that for at least three years. Four sources deeply involved in the Affordable Care Act tell NBC News that 50 to 75 percent of the 14 million consumers who buy their insurance individually can expect to receive a “cancellation” letter or the equivalent over the next year because their existing policies don’t meet the standards mandated by the new health care law.

None of this should come as a shock to the Obama administration. 12 Facts About The Epic Obamacare Launch Train Wreck That Every American Should Know. Micheal Snyder | Activistpost | Oct 11th 2013. 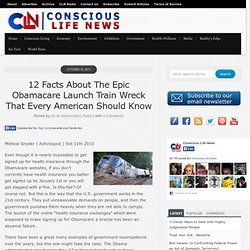