How Five Web Design Principles Boost Student Learning in an Online Course. “Our team realized quickly that we needed to do a better job cross referencing material on our course site. 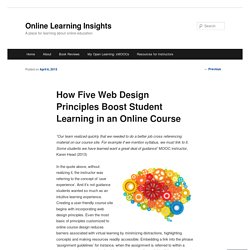 For example if we mention syllabus, we must link to it. Some students we have learned want a great deal of guidance” MOOC instructor, Karen Head (2013) In the quote above, without realizing it, the instructor was referring to the concept of ‘user experience’. Introduction to Information Design. Differences between Information Architecture and Information Design I believe I got this originally from Jesse James Garrett some time ago. 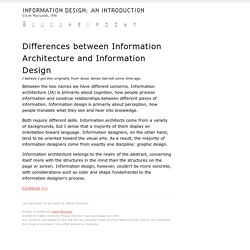 Between the two names we have different concerns. The Difference Between Information Architecture and UX Design. Newsletter Sign Up Original UX articles Curated Resources Never miss an issue! 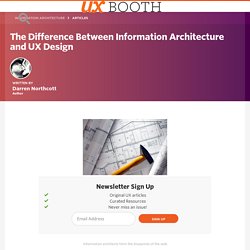 Uxpin web ui design best practices. 6 Interface Design Principles and Tips Every Web Designer Should Know. Good interface design is like the air we breathe - it's there when you need it and you use it without thinking. 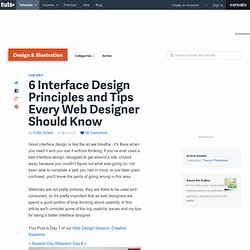 If you've ever used a bad interface design, struggled to get around a site, clicked away because you couldn't figure out what was going on, not been able to complete a task you had in mind, or just been plain confused, you'll know the perils of going wrong in this area. Websites are not pretty pictures, they are there to be used and consumed, so it's pretty important that as web designers we spend a good portion of time thinking about usability. In this article we'll consider some of the big usability issues and my tips for being a better interface designer. UX is not UI. Design Better And Faster With Rapid Prototyping. Advertisement The old adage, “a picture speaks a thousand words” captures what user interface prototyping is all about: using visuals to describe thousands of words’ worth of design and development specifications that detail how a system should behave and look. 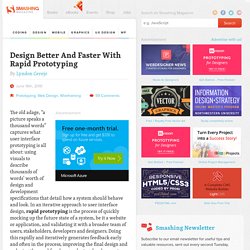 In an iterative approach to user interface design, rapid prototyping is the process of quickly mocking up the future state of a system, be it a website or application, and validating it with a broader team of users, stakeholders, developers and designers. Doing this rapidly and iteratively generates feedback early and often in the process, improving the final design and reducing the need for changes during development. Prototypes range from rough paper sketches to interactive simulations that look and function like the final product.

The keys to successful rapid prototyping are revising quickly based on feedback and using the appropriate prototyping approach. The Rapid Prototyping Process Scoping A Prototype Find the Story Do… Applying the Pareto Principle to the User Experience: MeasuringU. Jeff Sauro • September 12, 2012 In 1906 Vilfredo Pareto, an Italian economist, observed that wealth was unequally distributed in Italy. 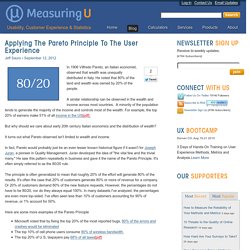 He noted that 80% of the land and wealth was owned by 20% of the people. A similar relationship can be observed in the wealth and income across most countries. A minority of the population tends to generate the majority of the income and controls most of the wealth. For example, the top 20% of earners make 51% of all income in the US[pdf]. But why should we care about early 20th century Italian economics and the distribution of wealth? The Anatomy of an Experience Map.

Experience maps have become more prominent over the past few years, largely because companies are realizing the interconnectedness of the cross-channel experience. 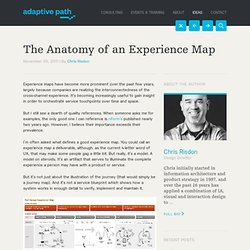 It’s becoming increasingly useful to gain insight in order to orchestrate service touchpoints over time and space. But I still see a dearth of quality references. When someone asks me for examples, the only good one I can reference is nForm’s published nearly two years ago. A step by step guide to scenario mapping. 6 minutes read. 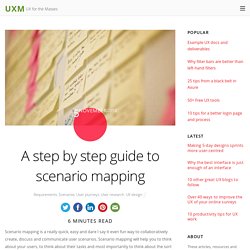 10 Heuristics for User Interface Design: Article by Jakob Nielsen. #1: Visibility of system status The system should always keep users informed about what is going on, through appropriate feedback within reasonable time. 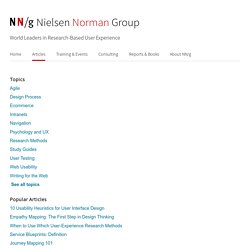 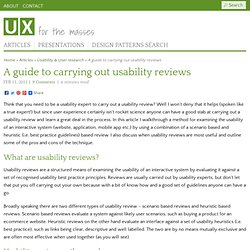 Well I won’t deny that it helps (spoken like a true expert!) But since user experience certainly isn’t rocket science anyone can have a good stab at carrying out a usability review and learn a great deal in the process. In this article I walkthrough a method for examining the usability of an interactive system (website, application, mobile app etc.) by using a combination of a scenario based and heuristic (i.e. best practice guidelines) based review. Kick Ass Kickoff Meetings. During project-based work, every freelancer, agency, or internal department has “the kickoff meeting.”

In theory, this meeting should have all the energy, excitement, and potential of the opening salvo of the Superbowl. Project team members should be inspired coming out of that meeting, full of ideas, and a desire to begin exploring solutions. Agencies and freelancers should begin to see their clients as friends and collaborators with unique insights that can only come from frank, open discussion of the design challenge at hand. 6.10 ‘Agile’ Design: flexible designs for learning. Lovely ui. Redirecting.

Signify 2 - Icon Font. Five Factors for Successful Persona Projects. By Jared M. Spool Originally published: Jul 06, 2011. How We Redesigned Our Product in Less Than a Week. Step 1: Patterns and intent Before the design sprint, the sprint leader (me, in our case) was responsible for finding websites and products we might seek to emulate, “patterns.” These patterns could be as high-level as the “personality of website X” or as granular as a typeface or other visual style. UX_DecisionFlow.png (PNG Image, 1855 × 1200 pixels) - Scaled (55%) 6 principles of visual hierarchy for designers. First there were stone tablets, papyrus scrolls and paper.

Then came computer screens and electronic tablets. As the technology to display a page evolves, it remains the designer’s job to arrange the content clearly. But what’s the best way? It’s an increasingly important question, as responsive frameworks force designers to think about many different pages at once. Faced with dense text and short attention spans, designers developed 6 principles to guide the reader’s eyes to the most important information.

These 6 principles of visual hierarchy will help you design everything from brochures to apps, guaranteeing a positive reading experience for the end-user. Clay tablet: Wikipedia (left); iPad: apple.com (right) 1. Scenarios. Scenarios describe the stories and context behind why a specific user or user group comes to your site. They note the goals and questions to be achieved and sometimes define the possibilities of how the user(s) can achieve them on the site. Scenarios are critical both for designing an interface and for usability testing. What to Consider When Writing Scenarios. Bad UI/UX Design. iOS UI Animations. Use Your Interface. Lovely ui. Use Your Interface.