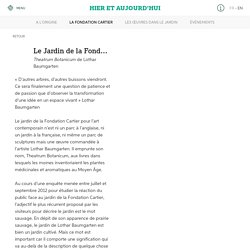 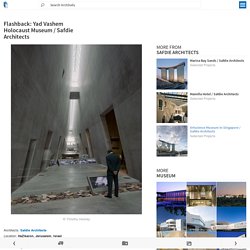 Flashback: One of Archdaily’s goals is to bring you up to date information about projects that are being designed and constructed around the world. We’ve created a new category to cover inspiring projects that were constructed between the 1990′s and the early 2000′s. The rebuilding of the Yad Vashem Holocaust Museum includes a new visitors’ center (Mevoah), a new history museum replacing the existing museum constructed in 1953, a Hall of Names, a synagogue, galleries for Holocaust art, an exhibitions pavilion and a learning and visual center. 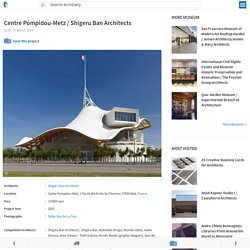 The first trend, which has become widely known as the “Bilbao Effect”, was born from the Guggenheim Museum in Bilbao, Spain, designed by Frank O. Gehry and completed in 1998. The strategy was to create sculptural architecture in an internationally unknown city to draw tourism, and it was ultimately a success. But there is an opinion that this kind of architecture spoils its functionality by disregarding the concerns of artists and staff, to produce a personal monument resulting in poor conditions for displaying and viewing art.

As an example at the other extreme, there is a method of renovating old industrial architecture to produce an optimal space for the exhibition of works, however neutral the architecture may be. BIG Designs Spiralling Museum for Swiss Watchmaker. Swiss luxury watchmaker Audemars Piguet have announced BIG as the designers for an extension to their headquarters in Le Brassus, near Le Chenit. 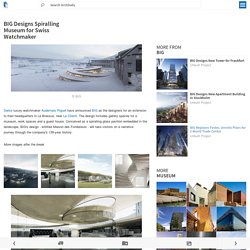 The design includes gallery spaces for a museum, work spaces and a guest house. Conceived as a spiralling glass pavilion embedded in the landscape, BIG's design - entilted Maison des Fondateurs - will take visitors on a narrative journey through the company's 139-year history. More images after the break The spiralling form was conceived as a response to a programmatic requirement, which called for a succession of galleries and workshops, however the logistics of the workshops required them to be connected.

The spiral shape allows the workshops to be spread along the narrative path through the building, while being physically adjacent. The roof of the structure is a continuous sheet of steel clad in brass. AD Classics: São Paulo Museum of Art (MASP) / Lina Bo Bardi. When Lina Bo Bardi received the commission to build a new museum of art on São Paulo’s Terraço do Trianon, she was given the job under one condition: under no circumstances could the building block the site’s panoramic vistas of the lower-lying parts of the city. 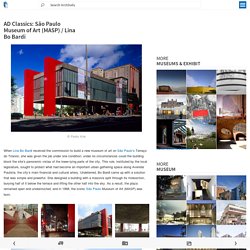 This rule, instituted by the local legislature, sought to protect what had become an important urban gathering space along Avenida Paulista, the city’s main financial and cultural artery. Undeterred, Bo Bardi came up with a solution that was simple and powerful. She designed a building with a massive split through its midsection, burying half of it below the terrace and lifting the other half into the sky. Aspen Art Museum / Shigeru Ban Architects. Architects: Shigeru Ban Architects Location: 637 East Hyman Avenue, Aspen, CO 81611, USA Area: 33000.0 ft2 Project Year: 2014 Photographs: Michael Moran / OTTO, Derek Skalko From the architect. 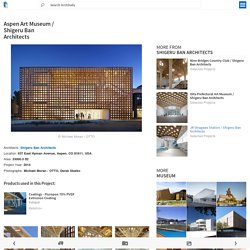 Located on the corner of South Spring Street and East Hyman Avenue in Aspen’s downtown core, the new AAM is Shigeru Ban’s first permanent U.S. museum to be constructed. Ban’s vision for the new AAM is based on transparency and open view planes—inviting those outside to engage with the building’s interior, and providing those inside the opportunity to see their exterior surroundings. The main entrance is located on the north side of the building along East Hyman Avenue, which allows access to the reception area and two ground-floor galleries. 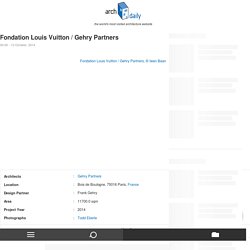 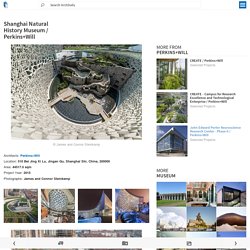 The much anticipated Shanghai Natural History Museum, designed by Perkins+Will’s Global Design Director Ralph Johnson, has opened in Shanghai. The 44,517 square meter (479,180 square foot) museum offers visitors the opportunity to explore the natural world through the display of more than 10,000 artifacts from all seven continents. The building includes exhibit spaces, a 4D theater, an outdoor exhibit garden, and a 30-meter tall atrium that welcomes visitors with an abundance of natural light filtered through a striking glass wall inspired by the cellular structure of plants and animals. 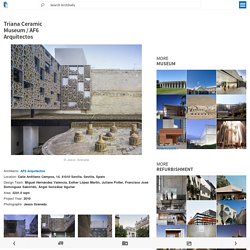 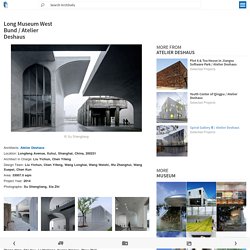