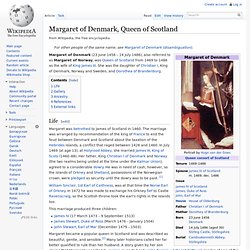 She was the daughter of Christian I, King of Denmark, Norway and Sweden, and Dorothea of Brandenburg. Life[edit] William Sinclair, 1st Earl of Caithness, was at that time the Norse Earl of Orkney. In 1472 he was made to exchange his Orkney fief to Castle Ravenscraig, so the Scottish throne took the earl's rights in the islands too. This marriage produced three children: Margaret became a popular queen in Scotland and was described as beautiful, gentle, and sensible.[2] Many later historians called her far better qualified to rule than her husband. She died at Stirling Castle on 14 July 1486, and is buried in Cambuskenneth Abbey. Gallery[edit] King James III and Queen Margaret on the 1562 Froman ArmorialStained Glass Window, Great Hall, Stirling Castle. 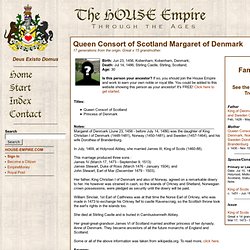 In July, 1469, at Holyrood Abbey, she married James III, King of Scots (1460-88). This marriage produced three sons : James IV (March 17, 1473 - September 9, 1513) James Stewart, Duke of Ross (March 1476 - January 1504), and John Stewart, Earl of Mar (December 1479 - 1503). Her father, King Christian I of Denmark and also of Norway, agreed on a remarkable dowry to her. He however was strained in cash, so the islands of Orkney and Shetland, Norwegian crown possessions, were pledged as security until the dowry will be paid. She died at Stirling Castle and is buried in Cambuskenneth Abbey. Margaret af Danmark og Norge von Oldenburg, Queen consort of Scotland (1456 - 1486. 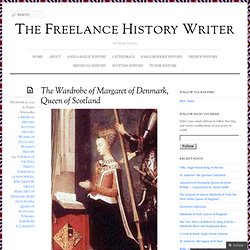 King James III of Scotland was very good at collecting revenues. He was also very good at holding on to his revenues. However there was one item in the royal budget he didn’t skimp on and that was his wife’s wardrobe. Margaret of Denmark dressed at the height of fashion in mid-15th century Scotland. King James’ mother, Mary of Guelders began a project of building the Church of the Holy Trinity in Edinburgh. Altarpiece from the Church of the Holy Trinity in Edinburgh, Scotland Margaret’s jointure, settled on her with her marriage to the King, was the highest allowed under the law of Scotland. 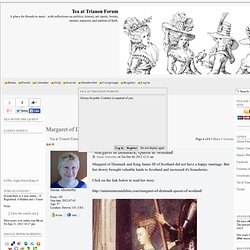 But her dowry brought valuable lands to Scotland and increased it's bounderies. Click on the link below to read her story: Margaret-of-denmark-queen-of-scotland. James III.