Meditation.. Chakra's.. Kundalini.. Yoga.. Be Here Now: Open Your Mind to Spirituality PDF ( Free. 221 Pages ·2006 ·39.25 MB ·8,222 Downloads·English “ Just as there is no loss of basic energy in the universe, so no thought or action is without its effects, present or ultimate, seen or unseen, felt or unfelt. ” ― Norman Cousins Similar Free eBooks. 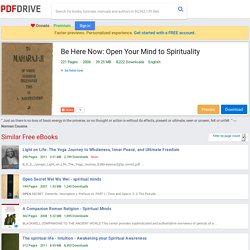 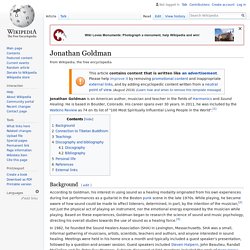 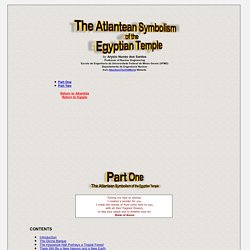 Inicio. Fair Use Notice This site contains copyrighted material encountered in the Internet, the use of which has not always been specifically authorized by the copyright owner. 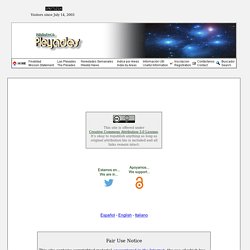 We are making such material available in an effort to advance understanding of environmental, political, human rights, economy, democracy, scientific and social justice issues, etc... We believe this constitutes a "fair use" of any such copyrighted material as provided for in Section 107 of the US Copyright Law. In accordance with Title 17 U.S.C. Section 107, the material on this Site is distributed without profit to those who have expressed a prior interest in receiving the included information for research and educational purposes. For more information please visit: Aviso de Uso Equitativo. On Hidden History, Ayahuasca & Consciousness: Graham Hancock Cuts The Crap - Eluxe Magazine. By Chere Di Boscio and Candice Litchfield British writer and historian Graham Hancock likes to shake things up. 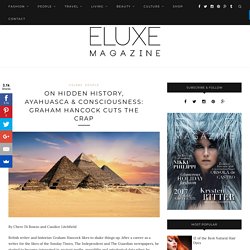 After a career as a writer for the likes of the Sunday Times, The Independent and The Guardian newspapers, he started to become interested in ancient myths, megaliths and astrological data when he served as the East Africa correspondent of The Economist in the 1980s. After decades of extensive investigations, he posited global connection with a very ancient, highly sophisticated “mother culture” that goes tens or even hundreds of thousands of years back further than most archeologists will admit, and which was wiped out by a major catastrophe. It is from this most ancient civilisation that he believes all subsequent ancient historical civilisations sprang. 10 Songs to Set you on a Meditative Journey. Sometimes, we have trouble settling into a calm, or meditative state. 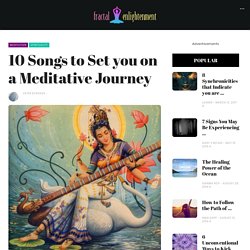 Most of the time, what I need is music that will not push me into a certain mood or mindset, but that will wash over and let me have my own meditative thoughts, without infringing their messages on me. Here are some songs that let me do exactly that. Whether you use them for: reading, writing, meditating, working, or painting etc, I hope these songs and instrumentals put you into a relaxed and meditative state. 1) “Re: Stacks” by Bon Iver Bon Iver’s lyrics are typically indecipherable, and nonsensical when you do decipher them.

His music settles over you like a blanket and shapes itself to whatever mood you find yourself in. How The Universe Is Sending You Signs And Why. The universe works in mysterious ways. 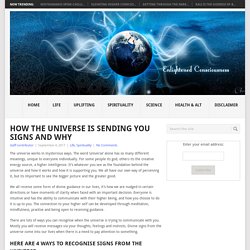 The word ‘universe’ alone has so many different meanings, unique to everyone individually. For some people its god, others its the creative energy source, a higher intelligence. How To Detox The Pineal Gland – Astral Travel, Explore Other Dimensions, Foresee The Future And More… Cleaning up the Pineal Gland is useful for those wishing to develop their multidimensional perception. 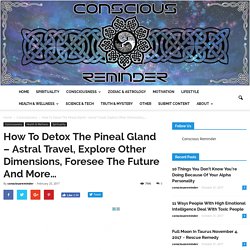 The Pineal gland will naturally make its own DMT when fully operational and we will be able to remain in a visionary state most of the time. An awakened Pineal gland brings the ability to consciously astral travel, explore other dimensions, foresee the future and receive communications from loving dimensional beings. DMT is a component of Ayahuasca – a plant medicine from the Amazon that brings profound physical and heart healing through its purgative effects and the perception of other dimensions. 7 Steps to Become More Spiritual Every Single Day! (The first 2 are enough) To live a highly spiritual existence is not as complicated as you might think. 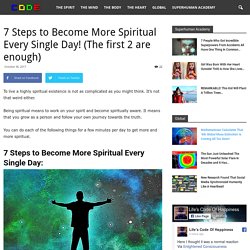 It’s not that weird either. Being spiritual means to work on your spirit and become spiritually aware. It means that you grow as a person and follow your own journey towards the truth. Who Am I?: The First Step to Being Seen is Seeing Yourself. The Mystery of the Self: A Spectacularly Useful Illusion ~ Fractal Enlightenment. “Trying to define yourself is like trying to bite your own teeth.” ~ Alan Watts My advice, here at the outset of this article about the self, is to take less into consideration Descartes’ dictum cogito ergo sum (I think, therefore I am) and take more into consideration the dictum dubito ergo sum (I doubt, therefore I am). 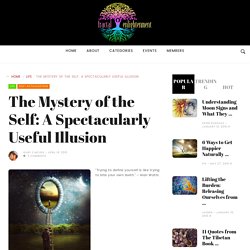 All we are ever doing in our pursuit of higher knowledge, of enlightenment, of understanding the self, is expanding the horizon of the unknown anyway. We are merely elevating ourselves to a “higher” level of not knowing, to a more erudite level of ignorance. Secret Teachings of All Ages: The Tree of the Sephiroth. Sacred Texts Esoteric Index Previous Next p. 121. The Wisdom of Insecurity. There is a contradiction in wanting to be perfectly secure in a universe whose very nature is momentariness and fluidity. Wisdom is the direct understanding of the fluidity of life. But the contradiction lies a little deeper than the mere conflict between the desire for security and the fact of change.

If I want to be secure, that is, protected from the flux of life, I am wanting to be separate from life. Yet it is this very sense of separateness which makes me feel insecure. To be secure means to isolate and fortify the “I,” but it is just the feeling of being an isolated “I” which makes me feel lonely and afraid. Understanding Aloneness And Isolation During Spiritual Shifts - In5D Esoteric, Metaphysical, and Spiritual Database. By Zoe Davenport,Guest writer, In5D.com It’s ok where you are at, it’s okay you need space, it’s ok to gift yourself what you need. Aloneness is something we HAVE to gift ourselves without question along our spiritual paths — even when we are with people — we have to continuously show up for our own personal and emotional needs.

This state of being connects us to a new timeline, one that steers us away from collective disaster. This state of being connects us to Source and helps us transcend old negative programs. In this transmission you are held in a powerful/transformative grid of light created by angelic forces using the ascending light of the earth and the heavens. Ayahuasca Science: What You Need to Know. Ayahuasca in the Age of Neuroscience. Does The Secret To How The Universe Works Lie Within This Geometrical Pattern? The Flower Of Life – Collective Evolution.

Welcome to 11:11 The Correcting Time. The Presence of Shiva – On the Trail of the First Yogi. Google. 11.11 Portal – High Magick, Manifestation, And The Mandela Effect. Alan Watts Debunks The POINTLESS 'Rat Race' That Wastes Our Lives In THIS Beyond Powerful Video! Opening Your 7 Chakras – Explained In a Children’s Show. Lao Tzu’s Four Rules for Living. The Wisdom of a Silent Mind. When your sense perception contacts sense objects and you experience physical pleasure, enjoy that feeling as much as you can. But if the experience of your sense perception’s contact with the sense world ties you, if the more you look at the sense world the more difficult it becomes, instead of getting anxious—“I can’t control this”—it’s better to close your senses off and with a silent mind observe the sense perception itself. Similarly, if you’re bound by the problems that ideas create, instead of trying to stop those problems by grasping at some other idea, which is impossible, diligently investigate how ideas cause you trouble.