Getting Started With Raspberry Pi Archives - fossBytes. Evancohen/smart-mirror. HannahMitt/HomeMirror. Michael Teeuw. Being a guy while visiting a shopping city with your girlfriend may cause your mind to drift away while walking thru Macy’s. 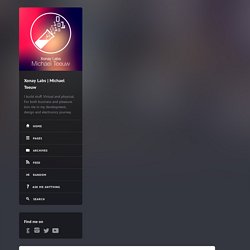 Or at least, this happened to me while i was visiting New York last january. Long story short: while wandering around I noticed a mirror with an illuminated sing on it. This is something i could built myself. Only better. I wanted my own Magic Mirror! (Ok, a mirror like this would be awesome. This Raspberry Pi powered voice controlled smart mirror is mind blowing. A Seattle web developer has created a smart mirror that runs on voice commands. 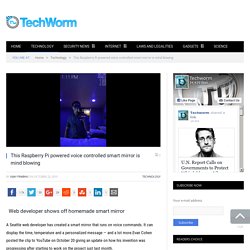 It can display the time, temperature and a personalized message — and a lot more.Evan Cohen posted the clip to YouTube on October 20 giving an update on how his invention was progressing after starting to work on the project just last month. Cohen’s mirror operates by turning it on with his voice commands, before getting it to display maps of Seattle and Berkley in California before he gets it to adjust the lights and the colour they emit in his room. “I started this project back in September and have been hacking things together in some of my spare time,” Mr Cohen wrote. Cohen says he first got inspired to build his smart mirror when he saw the work of Hannah Mitt, who built an Android application that powers her mirror. Cohen also took some inspiration from Michael Teeuw’s “Magic Mirror” concept, but Cohen built his own project from scratch.

RS Components. From cables and cases to cameras and cards, click below to find everything you need for your Raspberry Pi. 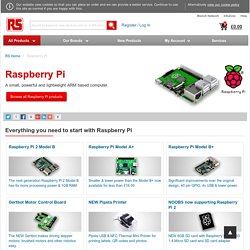 Five kits for building drones, gadgets and robots with your Raspberry Pi. While the Raspberry Pi already has a range of add-ons to make it simpler to get started on making robots and other neat gizmos - there are always new kits around the corner. 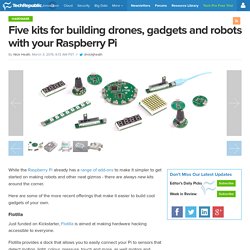 Here are some of the more recent offerings that make it easier to build cool gadgets of your own. Flotilla Just funded on Kickstarter, Flotilla is aimed at making hardware hacking accessible to everyone. Flotilla provides a dock that allows you to easily connect your Pi to sensors that detect motion, light, colour, pressure, touch and more, as well motors and simple screens. Controlling these electronics and linking them together can be done by dragging and dropping commands using a simple graphical interface. Buy Raspberry Pi B+ Starter Kit - Embedded (includes Raspberry Pi B+) Online at Low Prices in India. 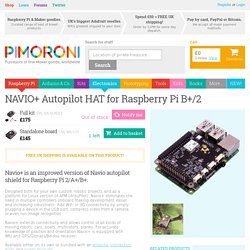 Designed both for your own custom robotic projects and as a platform for Linux version of APM (ArduPilot). Navio+ eliminates the need in multiple controllers onboard making development easier and increasing robustness. Add WiFi or 3G connectivity by simply plugging a device in the USB port, compress video from a camera or even run image recognition. Navio+ extends connectivity and allows control of all kinds of moving robots: cars, boats, multirotors, planes. For accurate knowledge of position and orientation Navio+ is equipped with IMU and GPS/Glonass/Beidou receiver. Available either on its own or bundled with an antenna, connection wires and power module! Navio+ - new version of Raspberry Pi autopilot [+ copter video] We are happy to announce the new version of our Raspberry Pi autopilot - Navio+, that was developed to run APM under Linux. 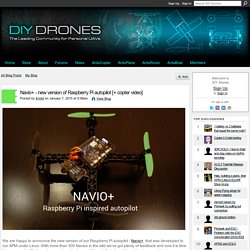 With more than 300 Navios in the wild we’ve got plenty of feedback and now it is time for an upgrade. We have been so busy testing and flying it, that almost forgot to share our latest progress. For those who never heard of Navio - Navio is a sensor and connectivity shield that allows to run APM’s Linux port directly on Raspberry Pi. Compared to the classic autopilot hardware it is more flexible and provides higher performance for additional tasks as well as for scientific and research purposes. Make an open source Raspberry Pi drone with Navio+ #piday #raspberrypi @Raspberrypi. January 16, 2015 AT 12:00 am Navio+ Raspberry Pi inspired autopilot! 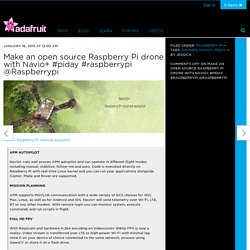 APM AUTOPILOTNavio+ runs well proven APM autopilot and can operate in different flight modes including manual, stabilize, follow-me and auto. Code is executed directly on Raspberry Pi with real-time Linux kernel and you can run your applications alongside. Copter, Plane and Rover are supported.MISSION PLANNINGAPM supports MAVLink communication with a wide variety of GCS choices for Win, Mac, Linux, as well as for Android and IOS. Navio+ will send telemetry over Wi-Fi, LTE, BT or any other modem. Read more and pick one up here! Each Friday is PiDay here at Adafruit! 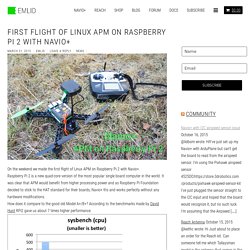 Raspberry Pi 2 is a new quad-core version of the most popular single board computer in the world. It was clear that APM would benefit from higher processing power and as Raspberry Pi Foundation decided to stick to the HAT standard for their boards, Navio+ fits and works perfectly without any hardware modifications. How does it compare to the good old Model A+/B+? According to the benchmarks made by David Hunt RPi2 gave us about 7 times higher performance. For real-time performance we fly on PREEMPT_RT patched kernel only. Raspberry pi. Raspberry Pi Quadcopter – DIY Drones. Raspberry Pi is a superpowerful and popular new computer board, like Arduino but with a much faster processor and built-in video. 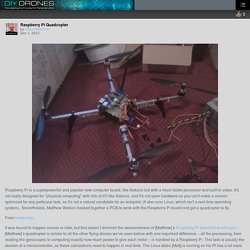 It's not really designed for "physical computing" with lots of I/O like Arduino, and it's not open hardware so you can't make a version optimized for any particular task, so it's not a natural candidate for an autopilot. (It also runs Linux, which isn't a real-time operating system). Nevertheless, Matthew Watson hacked together a PCB to work with the Raspberry Pi board and got a quadcopter to fly. From Hackaday: It was bound to happen sooner or later, but that doesn’t diminish the awesomeness of [Matthew]‘s Raspberry Pi-powered quadcopter. How to build your own Quadcopter AutoPilot / Flight Controller. Back to my home page Fig 1: 3DR Quadcopter Contents This article will walk you through building your own controller whilst teaching you the details of how it works. 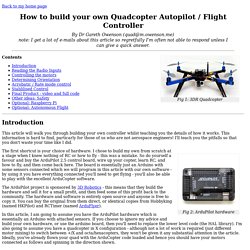 This information is hard to find, particarly for those of us who are not aerospace engineers! I'll teach you the pitfalls so that you don't waste your time like I did. Fig 2: ArduPilot hardware The first shortcut is your choice of hardware. The ArduPilot project is sponsored by 3D Robotics - this means that they build the hardware and sell it for a small profit, and then feed some of this profit back to the community. In this article, I am going to assume you have the ArduPilot hardware which is essentially an Arduino with attached sensors.

Fig 3: Propellor Configuration I'm also going to assume you have some experience with the arduino - or atleast with C/C++. The HAL library is made up from several components: WHAT TO DOWNLOAD: You'll need to download the ArduPilot version of the Arduino IDE. Fig 4: ArduPilot Arduino IDE Setup.

Remote Controlled Quadcopter Based On Raspberry Pi. We have seen a lot of remote controlled quadcopters based on many micro processors or dedicated flight controllers, but not many people would have thought of running a Linux machine on a quadcopter! Since Raspberry Pi has been very popular these years, and the it’s compact size and computation power compared to most micro-controllers, it would make a good flight controller.

The PiCopter is a remote controlled quadcopter based on a Raspberry Pi. The Raspberry Pi handles all the flight control without using a micro controller like Arduino. However many people have doubt about Raspberry Pi doesn’t run in real time so might have trouble getting sensor data and sending commands to the motor in the right timing, eventually leads to instability. How feasible is it to use a Raspberry Pi as the control system on an autonomously flying quadcopter? Owenquad - Raspberry Pi based quadcopter with full walkthrough coding tutorial. Quadcopter+Raspberry Pi = PiCopter. Autonomous, Cardboard, Rasberry Pi Controlled QuadCopter. Cardboard from the recycling bin, The sheet we we used was 32"x20" with a thickness off around 4.1mm.

Accessories For Raspberry Pi. How to setup Raspberry Pi 2 Model B 900Mhz Quad Core 1GB RAM. Beginner. Servo control using Raspberry Pi. Controlling DC Motors Using Python With a Raspberry Pi. In this tutorial I will show you how to connect some motors to your Raspberry Pi. Doing so will allow your Raspberry Pi to interact in the real world, making it possible to build a robot, turn on a fan on a hot day or even drop a treat for your cat or dog while your away.

What we plan to do is safely connect one or two motors to the Raspberry Pi with as few components as possible. Once we have the electronics put together on the breadboard, I will show you how to control them easily using Python to first make the motor spin, and then add some control to change the motor direction so we can go backwards. This guide will require a careful eye to catch any mistakes, and a bit of courage, especially if you are new to the GPIO connectors. USB Camera for Raspberry Pi A+/B+/2 and PcDuino. Raspberry Pi 2 Model B. The New Quad-Core Raspberry Pi 2 - Setup and Testing.