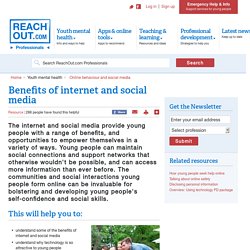 Young people can maintain social connections and support networks that otherwise wouldn't be possible, and can access more information than ever before. Benefits of social media for Business. April 2015. Social media becoming 'barometer' for self-harm as rates rise. Updated Rising rates of self-harm among young Australians have sparked warnings that social media use is partly to blame. 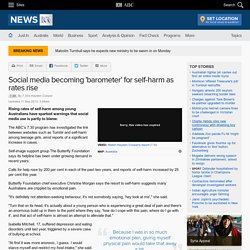 The ABC's 7.30 program has investigated the link between websites such as Tumblr and self-harm among teenage girls, amid reports of a significant increase in cases. Self-image support group The Butterfly Foundation says its helpline has been under growing demand in recent years. Calls for help rose by 200 per cent in each of the past two years, and reports of self-harm increased by 25 per cent this year. Butterfly Foundation chief executive Christine Morgan says the resort to self-harm suggests many Australians are crippled by emotional pain. "It's definitely not attention-seeking behaviour, it's not somebody saying, 'hey look at me'," she said.

Because I was in so much emotional pain, giving myself physical pain would take that away a bit. There is No 3G in Heaven - Four Corners. One suicide is a tragedy. 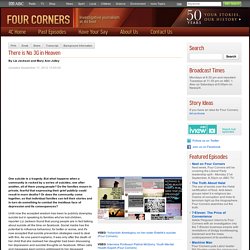 But what happens when a community is rocked by a series of suicides, one after another, all of them young people? Do the families mourn in private, fearful that expressing their grief publicly could result in more deaths? Or does the community come together, so that individual families can tell their stories and in turn do something to combat the insidious face of depression and its consequences? Until now the accepted wisdom has been to publicly downplay suicide but in speaking to families who've lost children, reporter Liz Jackson found that young people are in fact talking about suicide all the time on facebook. Can too much exposure to social media lead to anxiety and depression?

PHOENIX - Kelly Burleson is like a lot of us, spending a lot of time scoping out who's doing what on social media. 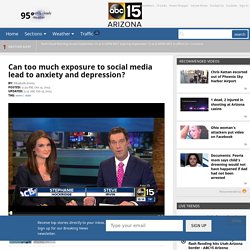 "Usually just photos, funny tweets, something that will keep my mind off of class," she said. While Kelly's site of choice is Facebook, yours might be Instagram, Twitter or Pinterest, like Alexis Krisay. Her pinning has been pretty focused lately, Alexis has spent the past nine months getting ready for her baby boy to arrive. "I really relied on Pinterest the whole time for the baby room planning," she said. Experts said using too much social media can turn the hobby from fun to a full blown addiction. "We live in a world where the rules just don't apply, we're no longer able to realistically judge the worth of other people.

Yasinski said all too often women are using social media to figure out if they measure up to the competition. "Now your sense of self is potentially all based on whether or not you feel like you are as good as everyone else out there," he said. Strickland_Amelia_C_1412_BA.pdf. Cyberbullying on Social Media Linked to Teen Depression. Your child's brain on technology: social media. Is your child disinterested in video games, television, and texting, but alarmingly enthralled by social media sites? 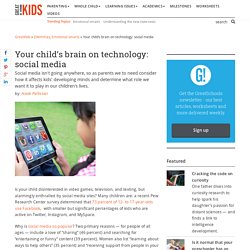 Many children are: a recent Pew Research Center survey determined that 73 percent of 12- to 17-year-olds use Facebook, with smaller but significant percentages of kids who are active on Twitter, Instagram, and MySpace. Why is social media so popular? Two primary reasons — for people of all ages — include a love of “sharing” (46 percent) and searching for “entertaining or funny” content (39 percent). Social Media and Suicide: A Public Health Perspective. The Negative Effect of Social Media on Society and Individuals. Cyber-Bullying and its Effect on our Youth. Internet. U.S. 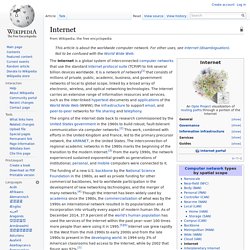 Army soldiers "surfing the Internet" at Forward Operating Base Yusifiyah, Iraq The Internet is a global system of interconnected computer networks that use the standard Internet protocol suite (TCP/IP) to link several billion devices worldwide. It is a network of networks[1] that consists of millions of private, public, academic, business, and government networks of local to global scope, linked by a broad array of electronic, wireless, and optical networking technologies. 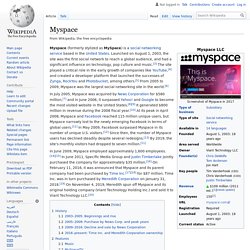 Myspace was the largest social networking site in the world from 2005 to 2008. It was headquartered in Beverly Hills, California.[4] Myspace had a significant influence on pop culture and music[11] and created a computer game platform that launched the successes of Zynga and RockYou, among others.[12] Despite an overall decline, in 2015 Myspace still had 50.6 million unique monthly visitors and had a pool of over 1 billion active and inactive registered users.[13] History[edit] 2003–2004: Beginnings[edit]

Facebook. This article is about the social networking service. 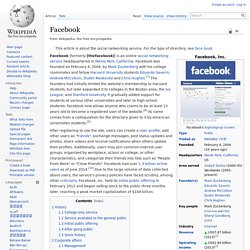 For the type of directory, see face book. Mobile phone. Evolution of mobile phones, through early smartphone A mobile phone (also known as a cellular phone, cell phone, hand phone, or simply a phone) is a phone that can make and receive telephone calls over a radio link while moving around a wide geographic area. 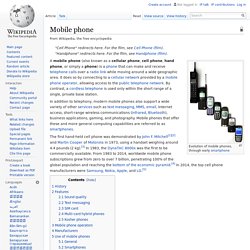 It does so by connecting to a cellular network provided by a mobile phone operator, allowing access to the public telephone network. By contrast, a cordless telephone is used only within the short range of a single, private base station. In addition to telephony, modern mobile phones also support a wide variety of other services such as text messaging, MMS, email, Internet access, short-range wireless communications (infrared, Bluetooth), business applications, gaming, and photography. Mobile phones that offer these and more general computing capabilities are referred to as smartphones. History A hand-held mobile radiotelephone is an old dream of radio engineering. The Motorola DynaTAC 8000X. Features Sound quality. Office of the Children's eSafety Commissioner. What can I do about cyberbullying? 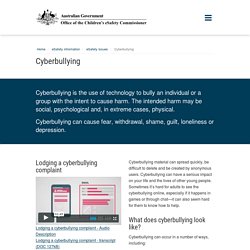 If you are being cyberbullied, you can: avoid retaliating or responding collect the evidence—keep mobile phone messages and print emails or social networking conversations block the bully and change your privacy settings report the abuse to the social media service and ask others to as well talk to someone you trust straight away—like a parent, teacher or friend. If you have a friend or know someone at school who is being cyberbullied: don’t join in—don’t comment on posts, images or videos that will hurt others don’t forward or share posts, images or videos that will hurt others make sure you leave negative groups and conversations report bullying to a trusted adult—this can be an anonymous report to a parent or teacher call others on their bullying and ask them to stop (if you feel confident enough) support your friend and let them know you are there for them.

Cyberbullying: From playground to Internet. Watch a school playground and you might not see signs of bullying. But bullying is happening more than ever, mostly within the digital network of cyberspace. It’s called cyberbullying and according to bullyingstatistics.org: Nearly half of young people have experienced some form of cyberbullying, and 10 to 20 percent experience it regularly.Mean, hurtful comments and gossip are the most common types of cyberbullying, and in cyberspace they can circulate widely in just minutes.Girls are at least as likely as boys to be cyberbullies or be victimized.Boys are more likely to be threatened by cyberbullies than girls.Cyberbullying victims are more likely to have low self-esteem and consider suicide.

Recognize cyberbullying symptoms. Devices in schools and at home means too much screen time for kids. Since the 2008 “Digital Education Revolution”, when the government funded laptops for secondary school students, there has been a growing impetus to increase young people’s screen time both in school and for homework at home. Now that the government funding has ceased, schools are moving toward “Bring Your Own Device” policies so that students can continue to benefit from educative uses of modern computing devices. Continuing to advance our students’ IT skills is an educational priority. IT skills are one of the key “General Capabilities” in the national curriculum and also appear in the content descriptions for specific subjects. In recent times there has been increasing interest in international comparisons through tests such as the International Computer and Information Literacy Study.

Won't take it lying down: How a 14-year-old girl of Indian-origin is hitting back at cyber-bullies. Cyber bullying: Father crusades to stop bullies after daughter's suicide following Facebook tirade. Updated. One in eight misdiagnoses their illness on the internet. One in eight people admit to misdiagnosing their illness using the internet, a new survey has revealed. The Pfizer index, which has been tracking health trends and behaviour for a decade, said women aged 25 to 35 years were most likely to admit getting it wrong using an online source.